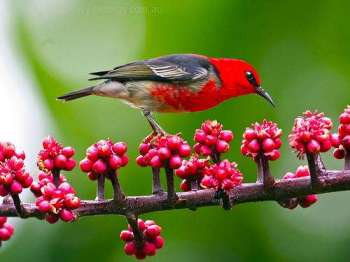 Now that Christmas is just over a week away, it’s time to see some of the birds that have “traditional” Christmas colors. Today’s color will be birds that have some sort of red on them. Other colors will be shown during the week. I have added new photos this year and some new colors later in the week.

When the Lord created the birds (fowls), He used many different colors, most for the protection of the bird (to blend in) or for display to attract a mate (to stand out).

We trust you enjoy the photos and that you are blessed as you consider the bird’s Creator, Who came to earth as a babe in a manger, so that He might redeem us from our sin. “All things were made through him, and without him was not any thing made that was made. (John 1:3)

But made himself of no reputation, and took upon him the form of a servant, and was made in the likeness of men: And being found in fashion as a man, he humbled himself, and became obedient unto death, even the death of the cross. (Philippians 2:7-8 KJV)