While we were on the same birdwatching trip to Circle B (American Bittern), we encountered a Wood Stork. There are five verses in the Bible that mention the Stork:

And the stork, the heron after her kind, and the lapwing, and the bat. (Leviticus 11:19 KJV)

And the stork, and the heron after her kind, and the lapwing, and the bat. (Deuteronomy 14:18 KJV)

Where the birds make their nests: as for the stork, the fir trees are her house. (Psalms 104:17 KJV)

Then lifted I up mine eyes, and looked, and, behold, there came out two women, and the wind was in their wings; for they had wings like the wings of a stork: and they lifted up the ephah between the earth and the heaven. (Zechariah 5:9 KJV) 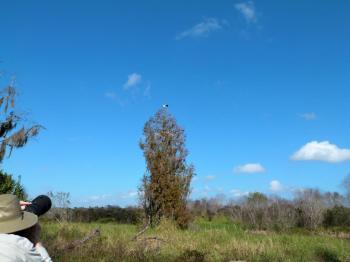 While we were birdwatching at Circle B just before Christmas, a Wood Stork flew over and landed in a tree a good way from us. Thanks to the zoom on my camera, I was able to capture its picture. They amaze me that they are “ugly” up close, but when they fly, they are so beautiful and graceful to watch. We see them quite often here and I have been known to feed them at Lake Morton. They also fly over our house and land in our community pond. 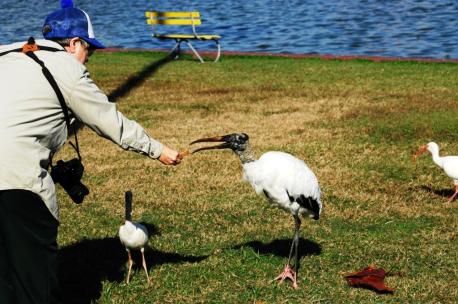 As mentioned above, Storks are birds in the Bible and are members of the Ciconiidae – Storks Family. Currently there are 19 Storks in this family. The Bible does not tell which one is being mentioned, but most like one of the Storks that lived in Israel.

Our Wood Stork here is a broad-winged soaring bird that flies with its neck outstretched and legs extended. It forages usually where lowering water levels concentrate fish in open wetlands; it also frequents paddy fields. Walking slowly and steadily in shallow water up to its belly, it seeks prey, which, like that of most of its relatives, consists of fish, frogs and large insects. It catches fish by holding its bill open in the water until a fish is detected. (Wikipedia)

“Tall and long-legged, the wood stork is the largest wading bird native to America. It is white with black flight feathers, distinctive because of its dark, featherless head (down to the upper neck) and thick, down-curved bill. Wood storks fly with neck and legs extended, interrupting strong wing beats with brief glides; their wingspan is 5 1/2 feet.” (FL FWCC) Their length is 33.5–45.3 in (85–115 cm) and weigh between72.3 to 93.1 oz (2050–2640 g). (NatGeo)