Ian’s Bird of the Week – Ouvéa Parakeet ~ by Ian Montgomery

I was half-way through preparing this bird of the week this afternoon when my 2008 iMac died, or at least got terribly ill, so I’ve delivered it to the Mac Doctors and am now working on my laptop. Thank goodness for automatic backups, as I lost only the email itself and the map below that I was in the middle of preparing. I want to get the email out today so that i can delivery 4 birds of the week this month – my level of enthusiasm for doing the bird of the week has risen considerably since I started preparing the first volume of the Diary of a Bird Photographer.

Anyway, back to the Loyalty Islands off the west coast of the main island of New Caledonia. After spending the morning in Lifou, we flew to the neighbouring island, Ouvéa, home to the endemic Ouvéa Parakeet. Ouvéa is a long thin island, thinnest in the middle in a way that reminded me of both Bribie Island in Tasmania and Lord Howe Island. Like Lord Howe, it has a coral lagoon on one side and an ocean beach on the other but the resemblance largely ends there, as Ouvéa is a coral atoll and very flat, while Lord Howe is volcanic in origin and spectacularly mountainous.

Map of where Ouvéa Parakeet Found, by Ian

The parakeet occurs mainly on the northern end of the island so its geographical range is tiny – see the scale on the map above, courtesy of Google Earth. The airport is on the southern end and we decided not to emulate some energetic birders who wrote a trip report and travelled from the airport to the north end of the island by bicycle. Instead, we had booked a rental car at the airport and booked accommodation in a tribal village called Gossanah in parakeet territory near where our bird guide Benoit lived. I’ll say a bit more about both our guide and accommodation later, but first the parakeet.

It was dark by the time we reached Gossanah, so parakeet hunting had to wait until the morning. I was woken up by early-riser Joy with the exciting news that there were parakeets in the grounds of where we were staying. I stumbled out bleary-eyed (remember we had got up at 4:30am the morning before to get our flight to Lihou) camera in hand and sure enough there they were, or there it was, first photo. Later we joined Benoit and he took us around his garden and though an area of adjacent rainforest. There we found some more parakeets, including the one in the second photo. 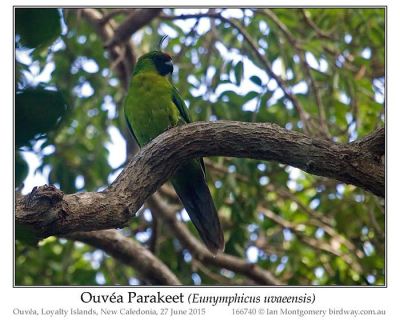 They aren’t as brightly coloured as the Horned Parakeet of the main island, Grand Terre, and the crest is different, containing more than two feathers and lacking red tips. The Ouvéa Parakeet used to be treated as a race of the Horned, but has now been given full species status.

Benoit showed us an active nesting hollow, third photo. We saw a parakeet flying into it and waited for it to reappear, but it had either settled down for the morning or had more patience than we had. The parakeets are very partial to the seeds of Papaya. They don’t wait for the fruit to ripen before they chew their way into the centre to get at the seeds. 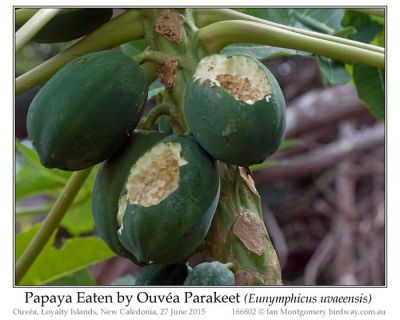 The parakeets are protected and the population has increased in recent years. We got the impression that the islanders are rather ambivalent about the birds. They are proud to have such an unusual endemic bird – its iconic status is actively promoted by the authorities – but are concerned about its effect on their largely subsistent way of life.

We stayed at a tribal home stay called Beauvoisin – ‘good neighbour’ run by Marc and his wife (see http://www.iles-loyaute.com/en/Prestataire/Fiche/1374/beauvoisin). They provided dinner in the evening, accommodation in a circular hut and breakfast – Joy took the photo above of me emerging from the hut in the morning. We enjoyed it very much and Marc and his family were delightful and looked after us very well. They spoke some English and have a Facebook page. Benoit Tangopi our guide was great too and we saw a variety of other interesting birds on the walk through the rainforest. We contacted him by phone +687 800549, but you might need to brush up your French as he doesn’t speak much English.

If a bird’s nest should chance to be before you in the way, in any tree or on the ground, with young ones or eggs, and the mother bird is sitting on the young or on the eggs, you shall not take the mother bird with the young. You shall surely let the mother bird go, and take only the young, that it may be well with you and that you may prolong your days. (Deuteronomy 22:6-7 AMP)

Thanks, Ian, for taking us along on another birdwatching adventure. I don’t speak French, so we are glad you did the talking and photographing. Another neat creation you have found for us to enjoy.

2 thoughts on “Ian’s Bird of the Week – Ouvéa Parakeet”