Endemic Treasures of the Cook Islands:

I thank my God upon every remembrance of you, always in every prayer of mine for you all making request with joy, for your fellowship in the Gospel from the first day until now, being confident of this very thing, that He Who has begun a good work in you will perform it until the day of Jesus Christ.  (Philippians 1:3-6) 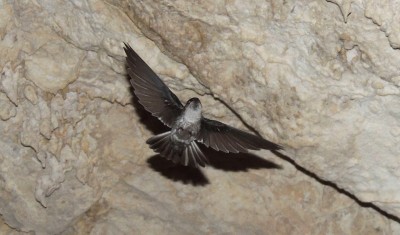 The Atiu Swiftlet (Aerodramus sawtelli, a/k/a Sawtelli’s Swift), known locally as the “Kopeka”, is a small member of the swift family, only known to dwell on the Pacific island of Atiu, one of the Cook Islands.

Like other swifts it is sooty-brown in color, with its upper side being darker than its lower side.  Those who have studied the Atiu Swiftlet report that it nests in limestone caves, yet ranges over farmed lands and areas dominated by ferns.

Because it appears to only reside in one place, in the wild, it is said to be “endemic”, i.e., endemic to the island of Atiu.  However, some taxonomists think the Atiu Swiftlet is only an inbred variety of swift that is conspecific with  the Polynesian Swiftlet (Aerodramus leucophaeus, a/k/a Tahitian Swiftlet), the White-rumped Swiftlet (Aerodramus spodiopygius), and maybe even the Australian Swiftlet (Aerodramus terraereginae).  Regardless of taxonomic “lumping” or “splitting”, the Atiu Swiftlet is mainly distinguished from  other swifts by its troglodyte nesting habits and its limited range.)  But for now we may assume that the Atiu Swiftlet, as a separate “species” or as an endemic “subspecies”, is unique to the Cook Islands.  Most who read these sentences, before today, had never heard of an “Atiu Swiftlet” – but the Atiu Swiftlets are not worried  about their relative obscurity, because God’s caring providence is what they need (Matthew 5:26), not acclaim or fame from folks around the world.

In fact, the Cook Islands host another unusual, not-so-famous, “endemic” treasure – a set of “Gospel Day” holidays, commemorating how God provided the Gospel of Christ (via British missionaries) unto that group of islands in the South Pacific.

In particular, the Cook Islands – for many years – have officially celebrated, with pageantry and gratitude to God, the arrival of Bible-based Christianity (in the early AD1800s), with the various component islands having specific days for recognizing “Gospel Day” as a memorial of the British missionary outreach that blessed their respective islands. 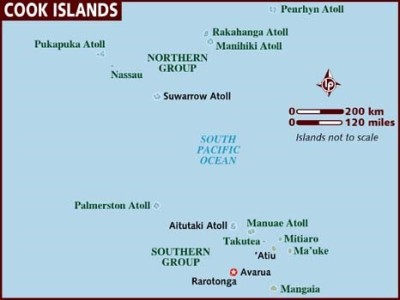 Wow!  What godly tradition!  What other nations show such respect for Christ?

As part of celebrating Gospel Day, in the Cook Islands, elaborate and expressive “nuku” dramas are acted out, by actors wearing colorful costumes who dramatize mankind’s opportunity to be redeemed, in Christ, from sin (sometimes even enacting New York City’s 9/11 Twin Towers disaster, to illustrate the global war between good and evil).  Hymn singing – and lots of it! – and dancing and music-making dominate much of the day, as well as feasting (coconut, arrowroot, pawpaw fruit, chicken, salt-meat, etc.), prayer, and interactive Bible-based worship activities. 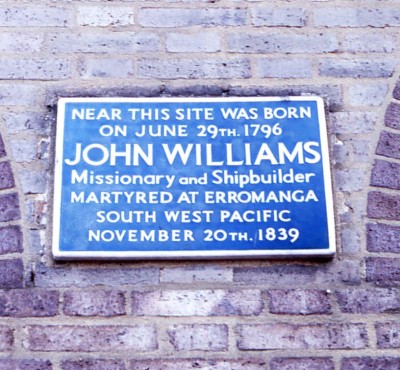 The missionary efforts of John Williams (“Apostle of the South Seas”, born near London), an English missionary to the Pacific, is recalled with thanksgiving, as well as the historic themes of Christianity.  John Williams (of the London Missionary Society) was murdered (and cannibalized) in AD1839 on the beach at Erromango, in Vanuatu, after a fruitful season of faithful missionary outreach to South Pacific islanders. 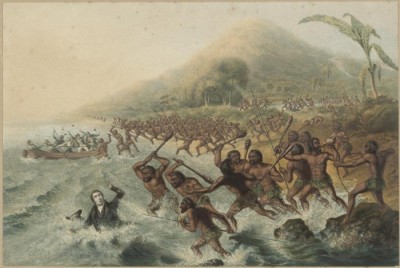 [For more details on how Gospel Day is celebrated in the Cook Islands, see http://www.cookislands.org.uk/gospelday.html and, especially for diary-like details, see youtube clip:  https://www.youtube.com/watch?v=IN9S9m1pNes .]

The tradition continues, although the calendaring aspects of this multi-island tradition have changed, in recent times, due to a governmental effort to standardize the holiday (for the Sunday closest to the original Gospel Day, for each island), and to coordinate with  a new public holiday called “Ra O Te Ui Airki” (on July 6th), according to a news report (dated October 19, 2011) saying:

“From next year, October 26 will be the only public holiday to celebrate Gospel Day as all individual outer island gospel days, including that of Rarotonga, will be celebrated on the closest Sunday to the date of Christianity arriving to the respective islands. The change in the public holiday status of the island Gospel Days is due to a new public holiday on July 6 to be known as the Ra O Te Ui Ariki out of respect for the countrys aronga mana, its ui ariki, ui mataiapo, ui rantagira and taunga [whatever that means!].  Next year churches will have the opportunity once again put their Bible story telling skills on display again when the nuku is organised to commemorate the national Gospel Day.”   [Quoting from http://www.cookislandsnews.com/item/32483-no-nuku-on-gospel-day/32483-no-nuku-on-gospel-day ].

Regardless of whatever day the arrival of the Christian Gospel is celebrated in each of the Cook Islands (as well as the historic day when each one of us, individually, received the Gospel), every day should be a day of appreciating the precious Gospel truth  —  and a time of joy (Luke 10:20) in knowing that God cares to reach and to forgive us, in His Son, the Lord Jesus (Philippians 1:3-6), if we willingly receive Him (John 1:12).   ><>  JJSJ