Ian’s Bird of the Week – Horned Parakeet ~ by Ian Montgomery

The Kagu was naturally top of our target list in New Caledonia being the most bizarre in appearance, behaviour, taxonomy and general curiosity value. Second on my list and I think third on Joy’s were the horned parakeets of Grande Terre (the main island) and Ouvéa, one of the Loyalty Island off the east coast of Grande Terre. These birds used to be treated as a single species, but have recently been split into the Horned and Ouvéa Parakeets respectively. I mentioned in a previous post that the Kagu nearly got upstaged as bird of the trip by an individual Horned Parakeet at Mont Khogis near Noumea, so here is the bird in question and the interaction that we had with it, a memorable birding experience by any measure.

On an earlier visit to the Inn (Auberge) at Mont Khogis we’d had brief views of three Horned Parakeets flying across the road and we had been told by Serge, the owner of the Inn, that the parakeets came in the late afternoon to feed on the Lavender trees in front of the building. On our visit to Rivière Blue we also tried with little success to photograph a back-lit one feeding in dense foliage right above us, a good situation for chiropractic business but not much else. All was quiet at the Inn on our second visit, so we started on the nearby rainforest walk until Roman, one of the staff, came charging after us with the welcome news that a parakeet had arrived.

We set ourselves up very cautiously at an unobtrusive distance from the tree and started taking remote photos of the parakeet and very gradually working our way towards it. I mean gradually: I and Joy had each taken about a hundred more distant shots before the first one in this series, above. As you can see the bird was very aware of our presence and looked as if it could take off at any time.

We moved slowly closer and the bird started to look more relaxed. In the second photo it is showing its skill at perching on one foot, holding a little bunch of Lavender fruit in the other, munching on them and watching us at the same time. We started to get the impression that it was actually enjoying the attention and showing off for our benefit, third photo.

Eventually,we worked our way up to the tree and around the other side so that we could photograph it in the sunlight a little over an hour before sunset with the mountains in the background. The bird munched on regardless and seemed completely unworried by our approach. It seemed to have an extraordinary appetite. We reckoned that it ate about 700 of the fruit in the time that we were there. It wouldn’t take too long for a small flock to complete strip the tree. 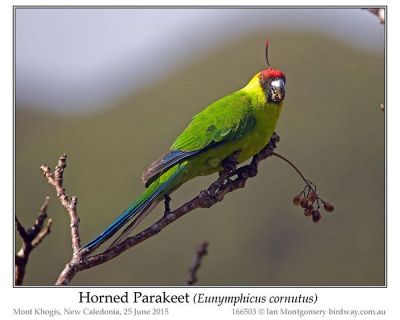 They’re referred to as ‘horned’ rather than ‘crested’ as the feathers of the horn are permanent erect. There should be two horns, but one of this bird’s may have been broken off. They are probably more than just decorative as they nest in hollows in trees and the horns seem to be used to sense the space, or lack of it, above the head. That at least is the suggestion made for the similarly equipped but very different Crested Auklet. It nest in holes in coastal boulders and being able to avoid cracking your skull against rocks would seem to be very desirable.

We can become blasé about even the most riveting spectacles. Three hundred photos each later, here is Joy relaxing under the tree and the parakeet, top centre, looking in the opposite direction. It was still there when we decided it was time to leave but it called after us as if sorry to see us go. By the time we walked around to the car park below the inn, it had left too and joined a couple of other parakeets in another Lavender tree. Joy and I agreed that this was one of the most beautiful parrots that we had encountered.

The horned parakeets belong to the sub-family of Australasian parrots called broad-tailed parrots. The best known members of this group (Playtcercini) are the Australian Rosellas, Ringnecks and Mulga Parrot and its relatives. The group also includes the Shining Parrots of Fiji and the Cyanorhamphus Parakeets of various islands of the southwest Pacific including Norfolk Island, New Caledonia, New Zealand and its sub-Antarctic islands and, formerly, Lord Howe Island and Macquarie Island. Most parrots are fairly sedentary, but these island ones seem to be quite good at island hopping, maybe helped by the cyclones that move generally in an easterly or southeasterly direction in this part of the world.

The Horned Parakeet is listed as Vulnerable with an estimated population on Grande Terre of between 5000 and 10,000 individuals. The Ouvéa Parakeet has a limited distribution on the northern end of this small island (about 40km long) and is listed as Endangered. Recent estimates of the population are about 2000 individuals and it is thought to be increasing. We did, of course, go to Ouvéa later in our stay….

I had some interesting correspondence on giant tree ferns after the last Kagu bird of the week. The Guinness Book of Records has a Norfolk Island Cyathea brownii species as the tallest and I had photos of a very tall one in Vanuatu, and a carving made from another one.

And hath raised up an horn of salvation for us in the house of his servant David; (Luke 1:69 KJV)

What an amazing “horn”! As Ian said, it was supposed to have a second one. Sounds like the usefulness of their “horn” spares their head. I’ve raised up under things before and hit my head. Maybe I need one of those. :)