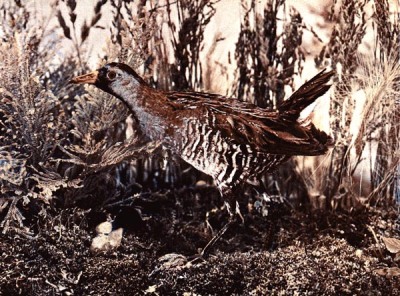 Sora – for the Birds Illustrated by Color Photography, 1897

ARIOUS are the names required to distinguish the little slate-colored Carolina Rail from its brethren, Sora, Common Rail, and, on the Potomac river, Ortolan, being among them. He is found throughout temperate North America, in the weedy swamps of the Atlantic states in great abundance, in the Middle states, and in California. In Ohio he is a common summer resident, breeding in the extensive swamps and wet meadows. The nest is a rude affair made of grass and weeds, placed on the ground in a tussock of grass in a boggy tract of land, where there is a growth of briers, etc., where he may skulk and hide in the wet grass to elude observation. The nest may often be discovered at a distance by the appearance of the surrounding grass, the blades of which are in many cases interwoven over the nest, apparently to shield the bird from the fierce rays of the sun, which are felt with redoubled force on the marshes.

The Rails feed on both vegetable and animal food. During the months of September and October, the weeds and wild oats swarm with them. They feed on the nutritious seeds, small snail shells, worms and larvae of insects, which they extract from the mud. The habits of the Sora Rail, its thin, compressed body, its aversion to take wing, and the dexterity with which it runs or conceals itself among the grass and sedge, are exactly similar to those of the more celebrated Virginia Rail.

The Sora frequents those parts of marshes preferably where fresh water springs rise through the morass. Here it generally constructs its nest, “one of which,” says an observer, “we had the good fortune to discover. It was built in the bottom of a tuft of grass in the midst of an almost impenetrable quagmire, and was composed altogether of old wet grass and rushes. The eggs had been flooded out of the nest by the extraordinary rise of the tide in a violent northwest storm, and lay scattered about the drift weed. The usual number of eggs is from six to ten. They are of a dirty white or pale cream color, sprinkled with specks of reddish and pale purple, most numerous near the great end.”

When on the wing the Sora Rail flies in a straight line for a short distance with dangling legs, and suddenly drops into the water.

The Rails have many foes, and many nests are robbed of their eggs by weasels, snakes, Blackbirds, and Marsh Hawks, although the last cannot disturb them easily, as the Marsh Hawk searches for its food while flying and a majority of the Rails’ nests are covered over, making it hard to distinguish them when the Hawk is above. 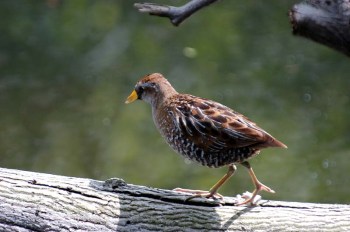 This is one of our fresh-water marsh birds. I show you his picture taken where he spends most of his time.

If it were not for the note calls, these tall reeds and grasses would keep from us the secret of the Rail’s home.

Like most birds, though, they must be heard, and so late in the afternoon you may hear their clear note, ker-wee.

From all parts of the marsh you will hear their calls which they keep up long after darkness has set in.

This Rail was just about to step out from the grasses to feed when the artist took his picture. See him—head up, and tail up. He steps along carefully. He feels that it is risky to leave his shelter and is ready at the first sign of danger, to dart back under cover.

There are very few fresh-water marshes where the Rail is not found.

When a boy, I loved to hear their note calls and would spend hours on the edge of a marsh near my home.

It seemed to me there was no life among the reeds and cat-tails of the marsh, but when I threw a stone among them, the Rails would always answer with their peeps or keeks.

And so I used to go down to the marsh with my pockets filled with stones. Not that I desired or even expected to injure one of these birds. Far from it. It pleased me to hear their calls from the reeds and grass that seemed deserted.

Those of you who live near wild-rice or wild-oat marshes have a good chance to become acquainted with this Rail.

In the south these Rails are found keeping company with the Bobolinks or Reed-birds as they are called down there.

Sora (Porzana carolina) by Lee at Circle B

Can the papyrus grow up without a marsh? Can the reeds flourish without water? (Job 8:11 NKJV)

Under the lotus plants he lies, in the shelter of the reeds and in the marsh. (Job 40:21 ESV)

Soras are in the Rallidae – Rails, Crakes & Coots Family. At present there are 151 species in the family. Sometimes the Sora has Rail or Crake attached to Sora. They spend most of their time in marshes.

Adult Soras are 7.5–12 in (19–30 cm) long, with dark-marked brown upperparts, a blue-grey face and underparts, and black and white barring on the flanks. They have a short thick yellow bill, with black markings on the face at the base of the bill and on the throat. Sexes are similar, but young Soras lack the black facial markings and have a whitish face and buff breast. They weigh about 1.7–4.0 oz (49–112 g).

The Sora’s breeding habitat is marshes throughout much of North America. They nest in a well-concealed location in dense vegetation. The female usually lays 10 to 12 eggs, sometimes as many as 18, in a cup built from marsh vegetation. The eggs do not all hatch together. Both parents incubate and feed the young, who leave the nest soon after they hatch and are able to fly within a month.

They migrate to the southern United States and northern South America. Sora is a very rare vagrant to western Europe, where it can be confused with Spotted Crake. However, the latter species always has spotting on the breast. a streaked crown stripe, and a different wing pattern.

Soras forage while walking or swimming. They are omnivores, eating seeds, insects and snails. Although Soras are more often heard than seen, they are sometimes seen walking near open water. They are fairly common, despite a decrease in suitable habitat in recent times. The call is a slow whistled ker-whee, or a descending whinny. The use of call broadcasts greatly increases the chances of hearing a Sora. Call broadcasts can also increase the chances of seeing a Sora, as they will often investigate the source of the call.

Interesting photo of a Sora defending it’s nest from a snake. (by nsxbirder)

Next Article – The Kentucky Warbler

The Previous Article – The American Osprey

Sora – All About Birds