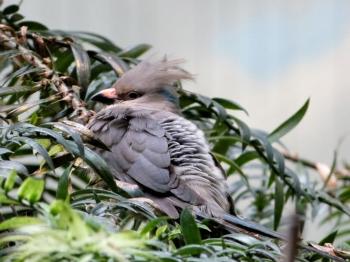 I was happy to finally get to see the Mousebirds. Have known and read about them, but had not been able to watch them. They were on my “birds to see” list at the zoo.

Mousebirds belong to the Coliidae – Mousebirds Family which has six (6) members. 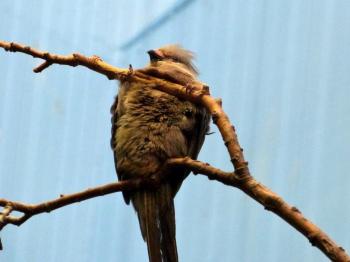 They are slender greyish or brown birds with soft, hairlike body feathers. They are typically about 10 cm in body length, with a long, thin tail a further 20–24 cm in length, and weigh 45–55 grams. They are arboreal and scurry through the leaves like rodents, in search of berries, fruit and buds. This habit, and their legs, gives rise to the group’s English name. They are acrobatic, and can feed upside down. All species have strong claws and reversible outer toes (pamprodactyl foot). They also have crests and stubby bills.

Mousebirds are gregarious, again reinforcing the analogy with mice, and are found in bands of about 20 in lightly wooded country. These birds build cup-shaped twig nests in trees, which are lined with grasses. Two to four eggs are typically laid, hatching to give quite precocious young which soon leave the nest and acquire flight. 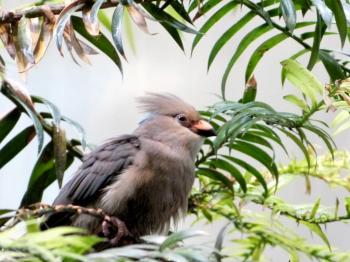 One Mousebird, supposedly the male, was hopping up and down. This video shows the two of them. One watching and one jumping. The orange bird is ignoring the whole deal. (I had been watching for a while and then decided to video, of course he went behind the branch.)

Nape – An easy definition is the back of the neck. 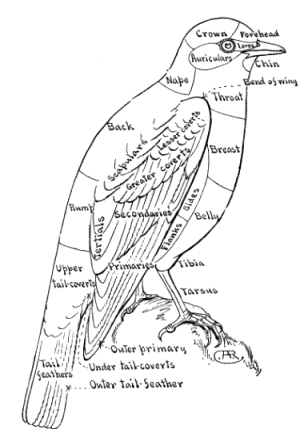 Notice the Nape between the Crown and the Back

There are quite a few birds that have colored napes that help identify them, such as Woodpeckers, Grebes, etc. Our Blue-naped Mousebird is one where the color of the “nape” is used in its name. While learning to bird watch, I kept saying (and still do) that the Lord should have placed little signs on them. That way when we look at them through binoculars, scopes, cameras, or our eyes, that we could just read the sign.

That is not the way it is, but there are many clues do that help us ID the birds. The variety of the birds with their colors and shapes keep us busy, but aren’t we thankful that He didn’t make them all alike. How boring that would be.

Here are the “-naped” birds:

You can see by the photos that the “nape” can be narrow or very broad.

Nape – All About Birds