We have been off on several birdwatching adventures the last few days. We were out enjoying the Lord’s creation, especially His birds. Still sorting through the photos, but wanted to share two birds we saw today. They were at Highlands Hammock State Park in Sebring, FL. Both are birds that I have seen, but only when another birder pointed them out. That always gives a joy when you find and can figure out what a bird is.

The first one, I was only able to get one decent photo because it moved on quickly. Here is the bird cropped. (I trust this is the correct ID)

Kingbirds are members of the Tyrannidae – Tyrant Flycatchers Family. Adults are grey-olive on the upperparts with a grey head and a dark line through the eyes; the underparts are light becoming light orange-yellow on the lower breast and belly. They have a long black tail with white outer feathers. Western kingbirds also have a reddish crown that they only display during courtship and confrontations with other species.

These birds migrate in flocks to Florida and the Pacific coast of southern Mexico and Central America. (Lucky for us.)

They wait on an open perch and fly out to catch insects in flight, sometimes hovering and then dropping to catch food on the ground. They also eat berries.

The song is a squeaky chatter, sometimes compared to a dog’s squeaky toy. The call is a sharp loud whit. Occasionally sings before sunrise.

I have only seen this bird maybe three or four times before, so it was a nice find. 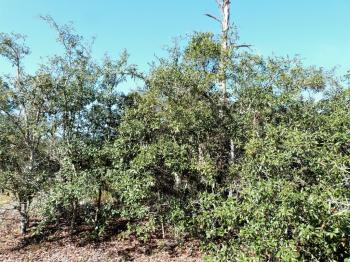 My next challenge started out in the trees and bushes above. This bird was all over the place and wouldn’t stay still as I tried to catch a photo of it. (Which is typical for those small birds.)

Here are some of my attempts to catch this bird. I do not use the “rule of thirds” because when I get home, finding the bird is easier if it’s centered. I figured out that it had a white breast by this photo. Let me zoom in.

Now the wings and its eye became more visible.

Then the bird finally popped out where I could get these next two photos.

That white eye is what nailed the ID on this bird. This is the first time that I’ve photographed one. When trying to figure these birds out, a good field guide and the internet sure come in handy.

My first ID in the field was wrong on both of these birds. I thought the Kingbird was some sort of Flycatcher and that this Vireo was a Warbler. Even though I only shoot in Program mode, and I do not claim to be a photographer, it does help to take proof or ID photos to help figure out what you really are seeing. It is more fun to just enjoy the birds while you are watching them and figure what it was later.

They belong to the  Vireonidae – Vireos, Greenlets Family. The White-eyed Vireo (Vireo griseus) is a small songbird. It breeds in the southeastern USA from New Jersey west to northern Missouri and south to Texas and Florida, and also in eastern Mexico, northern Central America, Cuba and the Bahamas.

Populations on the US Gulf coast and further south are resident, but most North American birds migrate south in winter.The White-eyed Vireo (Vireo griseus) is a small songbird. It breeds in the southeastern USA from New Jersey west to northern Missouri and south to Texas and Florida, and also in eastern Mexico, northern Central America, Cuba and the Bahamas.

Populations on the US Gulf coast and further south are resident, but most North American birds migrate south in winter.

More of these trips will be shared. Saw lots of Wood Ducks and Florida Scrub Jays that I will “Show and Tell” later.

Thank all of you up North who have finally been sending your birds down for the coming winter. The birdwatching was getting a little boring.

Some of our Birdwatching Trips