Today we finally got out to do a little birdwatching. Dan wanted to check out something on his camera, so we stopped by Lake Hollingsworth in Lakeland today.

After working on the update for the Birds of the World, I thought I would take Peter England’s advice on his comment and get out in the sunshine.

Well done Lee, go outside and enjoy the warm sun. Wear a hat….! Birds have a strange way of congratulating people like you !
Still your friend ? Peter E.

We saw mostly the normal birds for that lake, though there was a lack of birds today. It had been cold last night and maybe they were still under their blankets.

The White Ibises, about 40 of them, greeted us. They were looking for a handout, but we were just there to take a few pictures. So they walked back off. Some of the birds seen were the Mallards, Common Gallinules, Royal Terns, Ring-billed Gulls, Double-crested Cormorants (way out on the lake), Anhingas, Muscovy Ducks, Tricolored and Great Blue Herons, Red-winged Blackbirds and Boat-tailed Grackles. A flock of about 200 or more Fish Crows flew over, making their calls as they flew by.

The hardest part was trying to get a photo of the numerous Warblers that were flitting around the trees. They kept moving so much, I couldn’t get a decent shot. I did ID a Palm Warbler because it was standing on the dock. Also, some Yellow-rumped Warblers, because their yellow rumps showed up. Not sure if they are one of the split ones like a Magnolia or not.

Common Gallinule (Gallinula galeata) by Lee at Circle B

Dan got a decent photo of a Yellow-throated Warbler and I have one that is yellow, but not sure what it is. So, it is right here. Maybe someone knows for sure and will leave a comment. We get most of our Warblers down here in the winter and I really do not know that many of them. (Update: It is a Pine Warbler thanks to a reader.) It is easier to photograph the big birds like Herons, Ibises, Egrets, Anhingas and Cormorants which we see often. 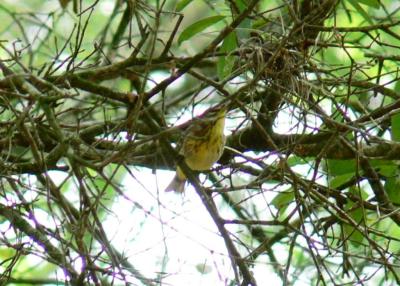 We also found a snake sunning itself. Dan got up close to get its picture, but I stayed back. It never moved the whole time we were watching it. We were down in the mid-30’s (F) last night, so it may not have been able to scurry away.

Not a bad birdwatching adventure for about 30 minutes worth of time. I just enjoy seeing the Lord’s neat birds out and about doing their thing.

You are worthy, O Lord, To receive glory and honor and power; For You created all things, And by Your will they exist and were created. (Revelation 4:11 NKJV)

*** My original photos were hacked. These are not the ones used originally. ***
*