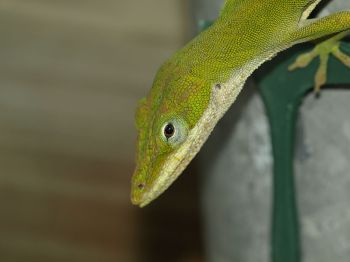 For we know that the whole creation groaneth and travaileth in pain together until now. (Romans 8:22)

The following is not one of my latest stories, but because it concerns one of God’s creations I dare to let you see it. Many people would laugh at me and, by the way some of my happenings can be seen as being laughable….even unbelievable!

About two years ago, when I was living in West Palm Beach, I was going through a difficult time. I well remember the few days when I used to sit outside and read. Lizards, as you Americans know, are a well-known sight and one particular lizard came down from the tree at the back of me and hid behind the drain pipe. It kept peeping at me from one side of pipe to the other. I took little notice!

The next day, same lizard, came across the lawn and performed once more. Maybe it wanted to grab my attention, but then it was only a common lizard.

On day three the same lizard ( or so I believe ) scampered across the lawn and commenced to do its tricks from behind the drain pipe. However, I felt the Holy Spirit speaking to me, reminding me of the Scripture in Jonah 4: 7 how that God appointed a worm to attack the gourd that was sheltering Jonah. Could it be that God had sent a lizard to tell me that He would be with me and never forsake me. despite my difficult circumstances? I felt it necessary to put may tongue out at him and if he responded I would know that God was in this strange situation!

But God prepared a worm when the morning rose the next day, and it smote the gourd that it withered. (Jonah 4:7) 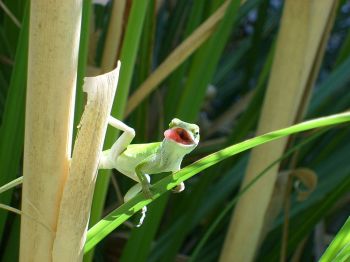 The next time my little friend popped its head out and looked at me, I put my tongue out at him. Immediately out came a big orange tongue like a small balloon! Then this ‘appointed ‘ lizard disappeared, never to be seen again. A few days later I was admitted into Wellington Hospital with a virus which took me off my feet. I knew that God was aware of all my circumstances even to the most minute detail.

(One of this blog’s readers and commenter)

This is my comfort in my affliction: for thy word hath quickened me. (Psalms 119:50)

Thanks Peter for an interesting story and inspiration.

Peter is one of our reader’s and comments often. He lives in the U.K. at the time. He has some more tales that will shared later. The one about his encounter with a blackbird will be published soon.

I am always willing to use guest writers. If you have something to share, let me know. I can be reached at Lee@Leesbird.com

2 thoughts on “The Whole Creation Has Been Groaning………..”