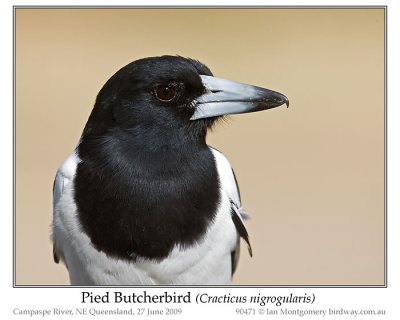 Ian’s Bird of the Week – Pied Butcherbird ~ by Ian Montgomery

Birds of the week are usually chosen on the basis of appearance, photo quality or species interest, but here for a change is one whose real claim to fame is auditory. Not that Pied Butcherbirds don’t look quite dapper, even if the hooked bill suggests a predatory existence and the black hood has the connotation of the executioner, at least for the Spanish : Verdugo Gorjinegro, where verdugo means executioner or hangman, and gorjinegro you can guess. However, their real claim to fame is their beautiful singing which has a clarity and sense of purpose that I think is unequalled. When I first heard a Pied Butcherbird singing in Australia in western New South Wales in 1971, I was fascinated. To me it seemed like it was practising the theme from an oboe concerto, as it would keep carefully repeating the phrases, each time slightly differently.

The first edition of Graham Pizzey’s Field Guide to the Birds of Australia (1980-2000) has wonderful descriptions – I bought it after reading his description of Musk Duck, which starts “A decidedly strange duck.” – so I’ll quote him on the Pied Butcherbird: “Superb: slow flute-like piping, of clear high-pitched and low mellow notes, throughout day and moonlit nights, best in early morning; often given by two or more birds alternatively, higher-pitched notes of one contrasting with more mellow notes of others. … Also accomplished mimicry, as part of quieter sub-song.”

I can’t just leave you hanging after a description like that. Here is a YouTube link to a lovely video of a duet

Listen to these and I’m sure you’ll agree that this is one of the most beautiful song birds in the world.

On the subject of mimicry, I had an email from Rose Bay in Sydney recounting a conversation that took place between a Grey Butcherbird and the correspondent, thank you Jeremy, who whistled in response, over several months. The bird remained hidden and unidentified in foliage until a couple of weeks ago when, during such a talk, he spotted the bird and the mystery was solved. I’ve accompanied a Pied Butcherbird here in Bluewater on the treble recorder. I checked their vocal range using a pitch analyser on sound recordings and found that the mellow notes were close to middle C (C4), while the top notes were around D6, two octaves above middle C; an impressive range.

And, yes, they do prey on small birds, mammals, reptiles and invertebrates and will even hunt in unison with Australian Hobbies. They get their name from their habit of wedging larger prey items in a fork in a tree (or clothes line) so that they can dismember it. If you think that sounds macabre, go and listen to Berlioz’s Symphonie Fantastique again, imagining the idée fixé played by a Pied Butcherbird, particular the rendering of it in the third movement on the oboe and by the clarinet in the fourth Marche au supplice. The latter appears briefly before the fall of the guillotine. I tried playing the first of the YouTube videos simulaneously with the third movement a short while ago and the result is, well, fantastic. 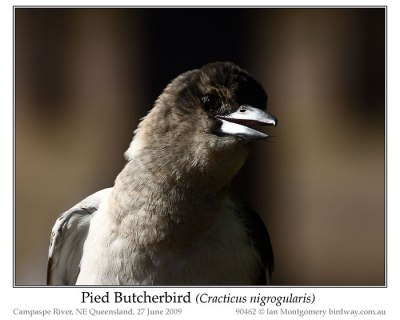 Anyway, back to family matters. Pied Butcherbirds have group territories similar to those of their cousins the Australian Magpies with usually one breeding pair. The female does all the hard work of building the nest and incubating the eggs while, the male, presumably, sings. The other members of the group, usually offspring from earlier broods, do help to feed the young.

I should, I suppose, mention the photos. The first three are of adult birds, the last two of brownish immature birds. At 32-36cm/12.5-14in in length the Pied Butcherbird is intermediate between the smaller Grey and Black-backed Butcherbirds and the larger Black Butcherbird. The Pied Butcherbird occurs through most of mainland Australia, but is absent from very arid regions, most of South Australia and Victoria, and southeastern New South Wales. Here in the northeast Queensland, they show a preference for watercourses. 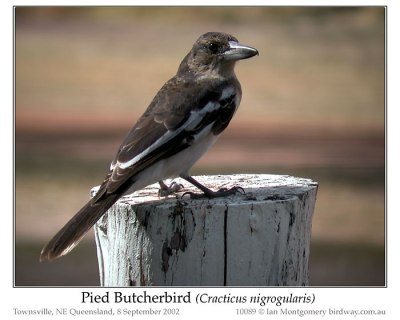 The bird of the week has been going out regularly, if not weekly, since late 2002. I have copies of almost all of them and I’ve decided to publish them as an electronic book under the umbrella “A Bird Photographer’s Diary”. At the moment, I’m progressing steadily through the second quarter of 2006, and I’m having great fun reliving all the experiences and places involved. The intention is to add photos of the various locations and habitats. I’ll keep you posted.

The flowers appear on the earth; the time of the singing [of birds] has come, and the voice of the turtledove is heard in our land. (Song of Solomon 2:12 AMP)

Wow! What an amazing article about these birds and the videos only enhance it more. I especially like the them singing duet. Ian finds us the most interesting birds to see and hear. Thanks, Ian.

Check out Ian’s Butcherbirds in his Artamidae Family

3 thoughts on “Ian’s Bird of the Week – Pied Butcherbird”