Continuing last week’s theme (White-faced Heron) of common – but in these pages neglected – Australian herons here is the other very widespread species, the White-necked or Pacific. It’s not as abundant or as well-known as the White-faced, but much bigger and a striking bird with its white head and neck and slate-grey back and wings. In length it varies from 76-106cm/30-42in with wingspan to 160cm/63in.

In breeding plumage, it develops plum-coloured plumes on the back (first photo at sunrise) and shoulders (second photo at sunset). It’s predominantly a bird of freshwater and is only rarely seen in estuaries. It’s quite partial to small shallow ponds and is widespread in inland Australia when water is available, moving to more coastal areas in dry seasons. So it can turn up almost anywhere in the country. In southern Australia it breeds in Spring and Summer; in northern Australia it can breed at any time of the year depending on rainfall – the one in the second photo was photographed in mid-winter in Townsville, but the first half of 2008 was very wet in northern Australia. 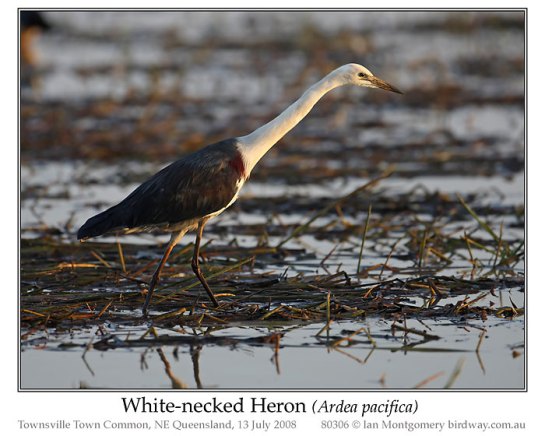 According to the field guides, non-breeding birds have rows of grey spots on the front of the neck, like the one in the third photo. The neck is supposedly completely white in breeding plumage, but it is not unusual to see birds with both purple plumes and grey neck spots. Both the second and third photos show the white patches on the leading edge of the wing. These are obvious (and diagnostic) in flight when they look like the landing lights of a passenger aircraft.

The bird in the fourth photo was in Boulia, in far western Queensland north of Birdsville. The field guides and HBW (Handbook of Birds of the World) are vague about juvenile plumage but are supposed to have more spots on the neck than non-breeding adults and may have greyish head and neck. the one in the Boulia bird has a white head and neck with grey spots on the sides of the neck, while the bird in the fifth photo has a grey head and neck.

I assume that both of these are juveniles. Both have pale spots on the wings, but I can’t find are reference to that in the field guides. I haven’t got HANZAB (Handbook of Australian, New Zealand and Antarctic Birds) so if anyone reading this does, I’d be grateful for any illuminating feedback on juvenile plumage.

The White-necked Heron breeds only on mainland Australia. It does, however, turn up regularly in Tasmania and southern New Guinea and has been recorded as a vagrant on Norfolk Island and in New Zealand.

the stork, the heron of any kind; the hoopoe and the bat. (Deuteronomy 14:18 ESV)

Thanks again, Ian. I really like that reflection in that fourth photo. Also, those spots on the non-breeding heron are very noticeable. We don’t have those here in the US of course, since they are native to your area. They sort of look like our Great Egret on the top part and our Great Blue Heron on the body part.