If your familiar with Australian birds you might assume – initially – that this photo was taken in an Australian rainforest, though you might have trouble pinning down the actual species.

Its dumpy shape and short tail suggested strongly to me the Pale-yellow Robin (Tregellasio capito) of coastal eastern Australia, second photo, but the colour pattern on the breast is more like the Western Yellow Robin (Eopsaltria griseogularis) of coastal southwestern Australia (no photo, sorry). It’s behaviour was very like that of the Pale-yellow Robin, often perching at precipitous angles on steep branches on the vertical trunks of trees. 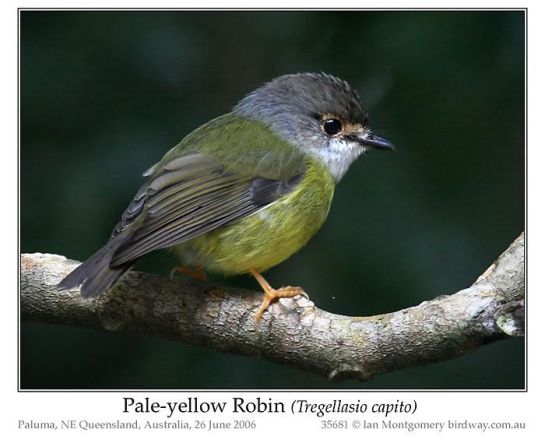 In fact I assumed that it was in the same genus as the Pale-Yellow (Tregellasio) and was surprised the find later that it was either in the same genus as the Eastern and Western Yellow Robins (Eopsaltria) or in the process of being moved to Microeca, the genus that includes the Jacky Winter, the Lemon-bellied and Yellow-legged Flycatchers or Flyrobins as the purists would have, being Australasian Robins. The reason for the move is based on genetic studies (Loynes et al , 2007). 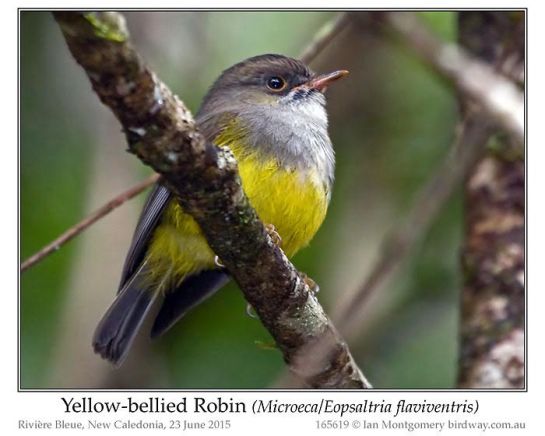 The fourth photo shows the Lemon-bellied Flycatcher/Flyrobin for comparison; it featured as bird of the week almost exactly ten years ago. 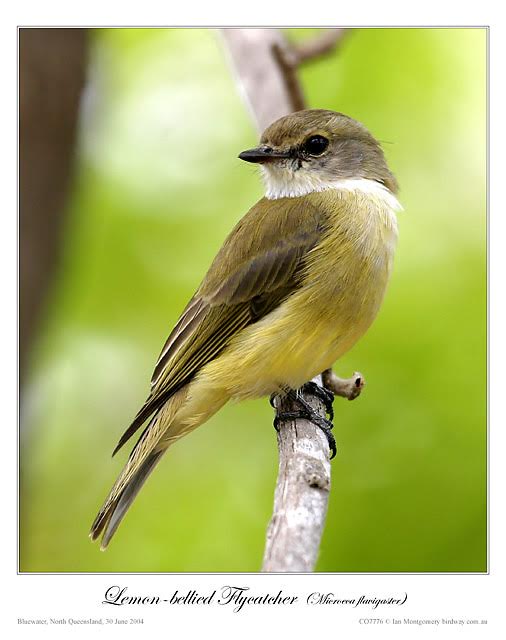 When we were in New Caledonia, I was intrigued by the call of the Yellow-bellied (Fly)robin. It didn’t sound like the Pale-yellow Robin or the any of the Yellow Robins, all of which have rather monotonous repeated calls. The Yellow-bellied sounded rather like the rhythmic ‘squeaky bicycle wheel’ songs of the unrelated Gerygones. It does, however, sound rather like that of the Lemon-bellied Flycatcher/Flyrobin, however, which supports the genetic analysis and the subsequent taxonomic switch. If you want to compare them, you can do so here http://www.xeno-canto.org/species/Microeca-flavigaster and http://www.xeno-canto.org/species/Microeca-flaviventris.

Both these web pages show distribution maps, so it would be interesting to speculate whether the ancestors of the Yellow-bellied got to New Caledonia from New Guinea or from Australia. Either way they’d either have had to do some island hopping or got carried across by one of the many cyclones that track from east to west across the southwestern Pacific. 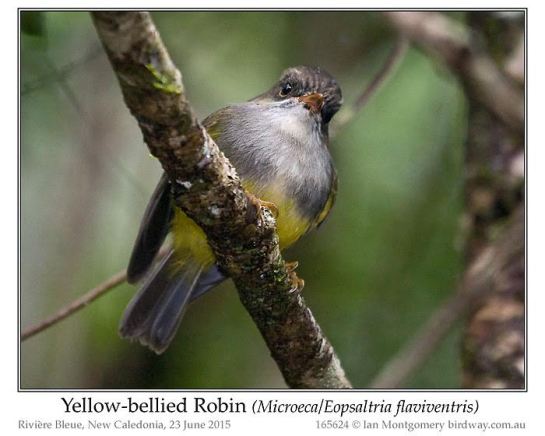 Anyway, enough about taxonomy and back to the original point about similarities between the birds of Australia and those of New Caledonia. So far, the birds of the week have dealt with the more unusual ones that represent either families (the Kagu) or genera (Horned Parakeet, Crow Honeyeater) not found in Australia. Most of the other endemic species have counterparts in the same genus in Australia. That had its own fascination coming across familiar-looking but different species but we were left in no doubt that we were still in the Australasian ecozone. To handle this on the Birdway website, the original Australian section – which became Australia and New Zealand after 2012 – is now becoming the Australasian section and I’ve put a map of the ecozone on the home page to support this.

I’ve more or less finished putting the New Caledonian bird photos on the website: http://www.birdway.com.au/index.htm#updates. Here are links to some species with Australian counterparts that probably won’t feature as bird of the week that may be of interest:

P.S. (Be warned: this is a commercial break!) If you’ve ever been to Northern Queensland, might ever go there or are interested in the region (who couldn’t be?) then your life isn’t complete without the ebook Where to Find Birds in Northeastern Queensland. The price ranges from AUD13.22 on Google Play to AUD22.00 in the Apple iTunes Store.

What an adorable little Flyrobin. As Ian said, the name Robin or Flyrobin is in flux. When I check the I.O.C. list, which is what this blog uses, the Microeca flavivetris is called the Yellow-bellied Flyrobin.

Out of the ground the LORD God formed every beast of the field and every bird of the air, and brought them to Adam to see what he would call them. And whatever Adam called each living creature, that was its name. So Adam gave names to all cattle, to the birds of the air, and to every beast of the field. But for Adam there was not found a helper comparable to him. (Genesis 2:19-20 NKJV)

Wonder is Adam kept changing the names.? While checking out the I.O.C., I realized that the new 5.3 version is out. Guess I’ll have to start updating the site again. :) or maybe it is :(