Choreographed Choir on the Wing:

Birds of a Feather Flock Together

Not forsaking the assembling of ourselves together, as the manner of some is; but exhorting one another, and so much the more, as ye see the day approaching.   (Hebrews 10:25) 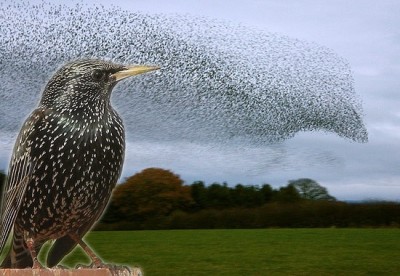 Not only do “birds of a feather flock together”, people who belong together should get together.  And the orderly assembling of both people and birds can give us a preview of coming attractions – when the world that we now know is replaced by one redeemed (Romans 8:18-28), where we gather together in glory, as a harmonious heavenly host.

Accordingly, seeing hundreds (if not thousands) of European starlings, flying like a flexible fluid, in choreographed unison, provides an birdwatching foretaste of (someday) seeing the heavenly host in action.  But there are other notable types of gatherings-in-motion, of kindred spirits “flocking together”. 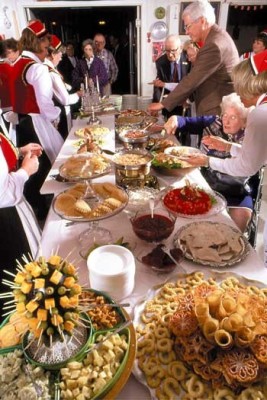 Last Saturday was a special event for my wife and me:  the annual Norwegian smörgåsbord hosted by the Women’s auxiliary of Our Savior’s Lutheran Church of Norse, Texas.  The event is so popular that you must (literally) “win the lottery” to be allowed to purchase tickets to the event! 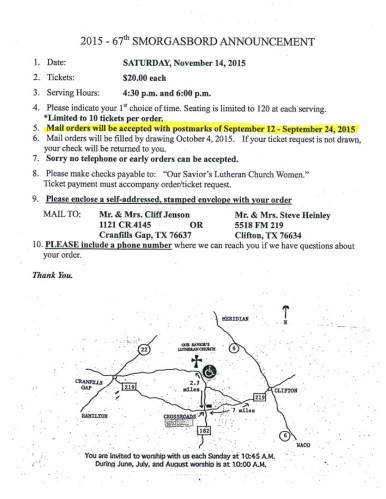 Copy of announcement of 67th annual smörgåsbord hosted by Our Savior’s Lutheran Church of Norse, Texas

This delightfully colorful and tasty feast, hosted by a rural Norwegian-immigrant-established rural congregation in the Texas “hill country” of Bosque County (located between Clifton and Cranfills Gap) is a multi-generational tradition of faith, food, fun, and fellowship – and a fundraiser for the more-than-a-century-old church (see http://oursaviorsnorse.org/ ). 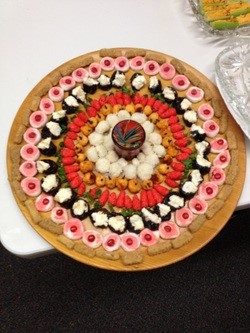 Church members dress in bunads (festive Norwegian costume of the AD1800s), as they usher attendees and/or serve attendees.  The feast begins with a Scripture-based devotional with bilingual music and table prayer, in the sanctuary, followed by a short walk to the fellowship hall, where the meal is served.

The mix of delectable dishes, of Norwegian-American cuisine, is too many for me to mention here  —  however, I will mention just a few that I enjoyed:  pickled herring, salmon mold, Norwegian meatballs, ham, turkey, stuffed eggs (i.e., what many non-Norwegians call “deviled eggs”), several kinds of cheese (including gjetost, brunost, gamalost), lefse (i.e., Norwegian potato bread that looks like a flour tortilla), lingonberry jam, lima beans, beets, various breads (including Swedish rye), potato salad, outstanding coffee, and various cookies (including krumkaker, rosettes, sandbakkels, fattigman).  And more!

The Lutheran church building itself, which includes modernized modifications of the original structure, is a reverent monument to the glory and worship of God  — the church was established by Norwegian immigrant settlers who came in AD1854.  The church building was begun in AD1875 and originally completed in AD1885.  The church sanctuary pews (and other chancel furniture) are original.

Our Savior’s Lutheran Church of Norse, in Bosque County, Texas 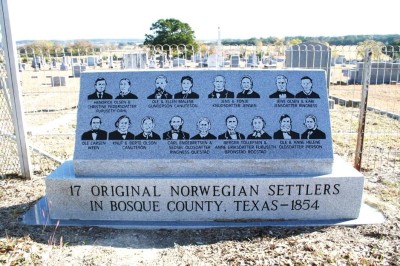 But more than that splendid kindred-spirit event, at the Lutheran Church last Saturday, reminded me of the phrase “birds of feather flock together”.  Why? Because en route to that wonderful event, which was about a 3-hour-drive (one way) for my wife and me, we were slowed down in our southward trek through construction-delayed traffic, along Interstate 35-W.  The construction activities on the west side of highway were reshaping the land surfaces and drainage patterns, enabling recent rainwater to collect in a large mud-puddle, by a large “blanket” of black that somehow quivered with motion.  Why was that black “blanket” moving?  It was a mob of star-spangle-jacketed European starlings (Sturnus vulgaris) congregated there – more than your eyes could count!  The pooled water had attracted a mega-flock of European starlings (which at first glance looked like a black blanket covering the ground), some of which drank water while others waited nearby, for their turns at the “watering hole”.

[Fair Use credit: http://i.dailymail.co.uk/i/pix/2008/Murmuration by Dailymail ]

But more spectacular than these earth-bound  starlings (in and at the mud-puddle) were their swarming legions of cousins, swirling, and looping in the air above, — called a “murmuration” of starlings.  This fluid flock of aerial acrobats were graciously swirling, curving, arching, banking, spinning, irrupting, swerving, pouring, turning, dipping, spreading, blending, soaring – in harmony, each one perfectly synched to one another like a living fabric of black-winged wonders, dancing in the wind – a choreographed choir of chattering starlings.

There is nothing quite like watching a living, flowing, swirling cloud of European starlings, flying as a fluid flock – a harmonious team of airborne navigators – in numbers and motions that prevent spectator quantification.  The starlings’ murmuration is more than “birds of a feather flock together”; this is “birds of a feather fly like a fluid-fabric together!” – truly an amazing display of God’s handiwork in flying feathers.

As we watched in amazement, at the synchronized motions of these little black (and somewhat iridescent) marvels, we thought about the high-speed harmony God has directed these starlings to implement, in their humble little lives.  God-honoring harmony – what a concept!

Of course, if we “forsake the assembling of ourselves together” we cannot achieve any such choreography. And, when we do get together, we do well to focus on our unity in Christ, which means prioritizing and practicing  the truth in love.

Behold, how good and how pleasant it is for brethren to dwell together in unity!  (Psalm 133:1) 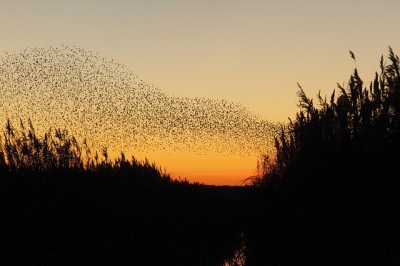 3 thoughts on “Choreographed Choir on the Wing: Birds of a Feather Flock Together”