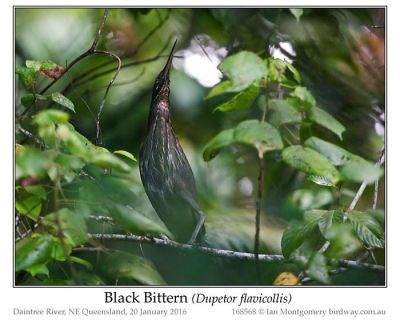 Well, thanks to your moral and spiritual support yet again, here is the Black Bittern. This bogey bird was the North Queensland bird that I’ve spent the most time trying unsuccessfully to photograph since the Red-necked Crake. Ian Worcester (“Sauce”) of Daintree River Wild Watch, knows the wildlife of the Daintree River like the back of his hand and took us straight to an active Black Bittern nest where we disturbed this female (females have browner plumage than males) who retreated into the depths of the tree and adopted the frozen posture so typical of bitterns. You can see from the greenish blur in the bottom half of the photo that I had to take this photo through a small gap in the vegetation.

With the Black Bittern spell broken within minutes of leaving the wharf, I was free to relax and enjoy the view and whatever else the trip had to offer, while hoping for more and better Bittern photos of course. We left the wharf at about 6:30am and I took this view looking up the river at 6:42am after photographing the Bittern. 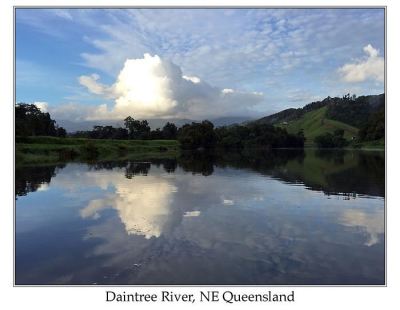 We continued up the river and into Stewarts Creek and visited the nests of a few more bitterns and of a couple of Great-billed Herons. We saw a couple of Bitterns flying away, as usual, and it was over an hour before the male in this photo hung around long enough for a photo. The male has blackish plumage with a slight blue sheen and buff streaks below the head. Both sexes share incubation and care of the young and this one had left the nest like the first one and moved to the back of the tree where he also froze. 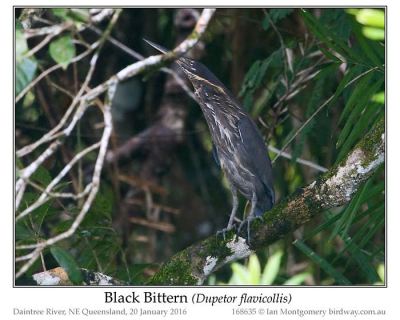 Looking from the bright area on the river into the deep shadows of the riverine forest made the birds extraordinarily difficult to see. The photo below is a full-frame image from a 400mm telephoto lens and the bird is almost invisible. The bill and neck stripe of the bird were aligned so perfectly with the twig behind that I couldn’t help wonder whether it was deliberate. The rest of the body just looked like a limb of a tree. 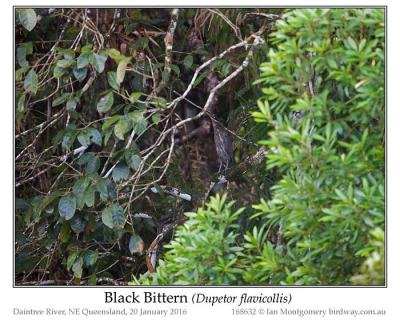 Here is one of the nests, an untidy collection of sticks wedged in a branch 4 or 5 metres above the surface of the river. Something white is just visible in the nest, but I can’t tell whether it’s an egg or a fluffy chick. 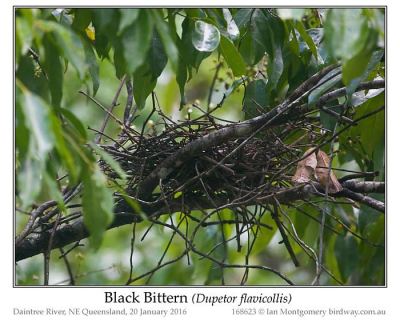 Anyway, that was it for Black Bittern photos. We went out a second time later in the morning and revisited a couple of the nests including the one near the wharf, but we didn’t see any more birds. I’ve since discovered from Handbook of Birds of the World that Black Bitterns are “crepuscular and nocturnal with peak activity at dusk and dawn” so that may be why. None of the Australian field guides mention this and maybe this is why I’ve had difficulty finding them before.

Thanks, Ian, and, yes, I was selfishly praying that you would find “your bird” this time. Every time you succeed, we get to see another great series of avian photos.

When the Lord created these Black Bitterns, He definitely had their protection in mind. Did you all notice that 4th photo? You can hardly find the Bittern. He looks like a branch.