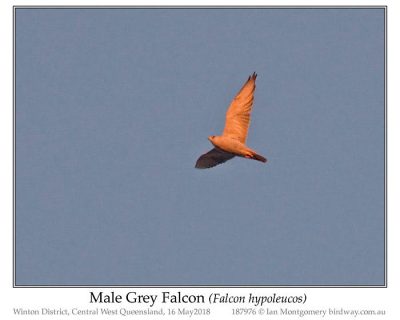 Bird of the Moment – Grey Falcon by Ian Montgomery

Here is a special bird of the moment for the festive season. If you asked Australian birders to nominate the most sought after diurnal raptor, you’d probably get a choice of two: the Red Goshawk of the Hawk and Eagle family (Accipitridae) and the Grey Falcon of the Falconidae. Rex Whitehead, my birding pal in Mount Isa had told me about a nesting pair of Grey Falcons in the Winton district so I came back to Townsville that way at the end of the camping trip in May.

The Falcons were nesting high up on a very tall communications mast. Rex had told me that they were in its vicinity only from before dusk until shortly after dawn and I took his advice and camped near the base of the mastto maximise my chances of seeing them. Sure enough they arrived in the evening but I got only poor shots of them flying in and perched in shadow on the mast.

I got up early and was rewarded three or four minutes after sunrise by the male flying around calling (first photo) in preparation for mating with the female (second photo) who was perched on the mast near the nest.

This behaviour was repeated two more times over the hour or so. The third photo shows the third mating attempt at a different location just over an hour after sunrise and the fourth photo shows the male flying away four seconds later. 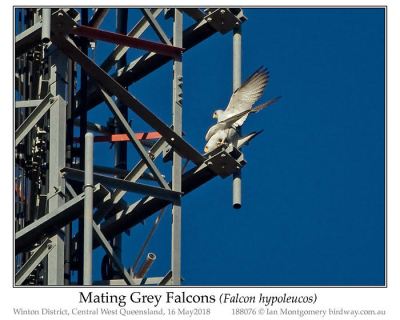 The sexes are similar, though the females, as is typical for raptors, are larger. The male has a shorter tail which supposedly makes it look longer winged in flight but I didn’t get any photos of the mainly sedentary female for comparison. The fifth photo shows the female in the same position as during the third mating (third photo) but the male is sitting in the nest.

Grey Falcons are supposed to use the old nests of other raptors or corvids (ravens and crows) preferably high up. In the arid areas where they occur, tall trees are few so in recent years they’ve taken to nesting in communication masts.

About two hours after sunrise, the birds disappeared as quietly as they’d arrived the previous day and I didn’t see them fly away. This pair had just bred successfully with two young fledging, so it was encouraging to see them preparing to do so again.

The Grey Falcon is an Australian endemic sparsely scattered over the drier inland areas of mainland Australia except the southwest, eastern and southern coastal areas and the wetter parts of northern Australia. The breeding range has contracted since the mid 20th century to drier areas north of 26º S. It’s population is estimated at less than 1000 mature individuals and it is classified as vulnerable. Threats include habitat clearing, egg collecting and the taking of young for falconry so I’m sure you’ll understand why I’ve been a bit vague about the actual location of the mast.

Christmas seems to be a time for unrestrained gaudiness, dare I say meretriciousness, in decoration so here is my gaudiest photo from 2018 – taken from my back verandah – to get into the spirit of things. I wish you a joyful, safe and happy festive season and a peaceful and fulfilling 2019. 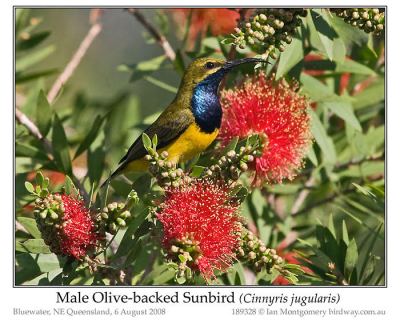 “I am come a light into the world, that whosoever believeth on me should not abide in darkness.” (John 12:46 KJV)

Thanks, Ian, for showing us one of Australia’s endemic birds. When I first saw the rosy colored Falcon, I thought you had made a mistake. Lighting makes a lot of difference.

I especially love your Christmas addition of that lovely Sunbird.

Merry Christmas, Ian, and all of you that are reading this post.