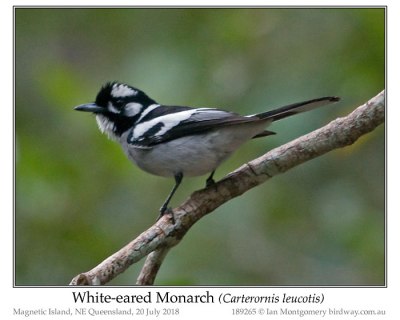 In February we had the Satin Flycatcher as bird of the moment. This is a generally uncommon member of the Monarch Flycatcher (Monarchidae) that I’d had trouble photographing until one obligingly turned up at my bird bath last October. Here is another member of the family that is also elusive, the White-eared Monarch. It’s generally rather uncommon and it tends to stay out of sight in the foliage of tall trees so spotting it is hard and photographing it is more so.

Its movements are not well understood but it tends to move from the highlands to coastal areas in winter and is mainly a winter visitor in the Townsville region. In Where to Find Birds in North-east Queensland Jo Wieneke particularly recommends the Nelly Bay end of the Nelly Bay to Arcadia walking track along Gustav Creek on Magnetic Island, where the trees are not very tall, for this and other Monarchs and Fantails. 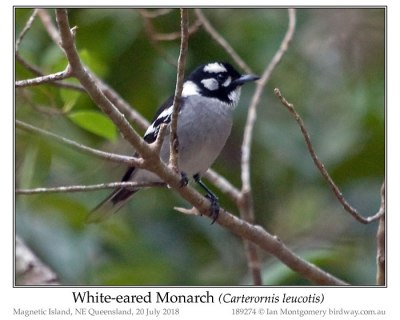 It so happened that we were staying on Mandalay Avenue within walking distance of the start of the track last July for the weekend workshop of the North Queensland Recorder Society so I checked out the walking track before the workshop began. Sure enough, I found all the species listed in the the ebook including a couple of pairs of White-eared Monarchs so the photographic drought was at an end. 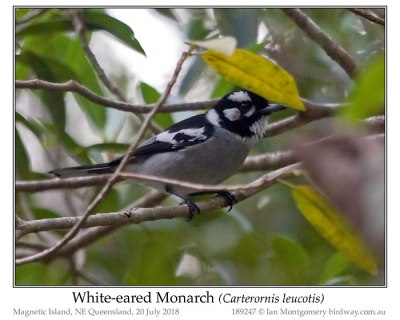 The birds I saw on that occasion were all adults. The juveniles look confusingly different with plumage in varying shades of grey rather than black and white so I’ve included a distant photo of a juvenile taken from a boat on the Daintree River north of Cairns. If nothing else it illustrates the difficulty of finding these birds in thick foliage. 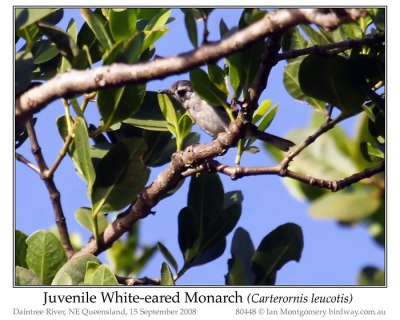 It’s geographical range comprises the ranges and coasts of eastern Queensland from Cape York to just south of the New South Wales border north of the Tweed River. It’s rarer in the southern part of the range so North-eastern Queensland is the best place to look for it.

For the taxonomists, it is the only Australian member of a small genus whose other members are the striking Golden Monarch (C. chrysomela) of New Guinea, which is orange-yellow and black, and the White-naped and Tanimbar Monarchs (C. pileatus and C. castus, sometimes treated as a single species) of the Moluccas and Lesser Sundas east of New Guinea. These latter two look much more like the White-eared Monarch than the Golden Monarch both in colour and patterning, posing an interest problem for the bio-geographers.

Since publishing Diary of a Bird Photographer Volume 2 I’ve merged Volumes 1 and 2 and plan to publish the combined work at the end of this year, including all the 2019 Birds of the Moment. My more immediate aim was to produced a combined taxonomic index making it easy for me to see which species have been covered since 2002 and which are candidates for future BIrds of the Moment. This combined volume will be a free update to purchasers of Volume 2. Sales so far have been slow so if you want to encourage me with the Bird of the Moment, I’d encourage you to show your interest and take advantage of this offer. 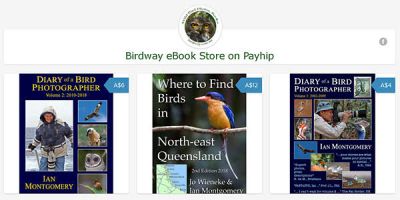 A couple of purchasers have expressed a preference for the earlier bank transfer and Dropbox download, so if you rather do that too, just let me know Ian@birdway.com.au or ianbirdway@gmail.com and I can also arrange download through the website as an alternative to Dropbox. I’ve had inquiries about giving the ebooks as gifts: contact me if you wish to do so.

Ian’s comment, in the first paragraph, caught my interest. “It’s generally rather uncommon and it tends to stay out of sight in the foliage of tall trees so spotting it is hard and photographing it is more so.” It brought to mind the verses of trusting in the shadow of God’s protection.

“How precious is Your lovingkindness, O God! Therefore the children of men put their trust under the shadow of Your wings.” (Psalms 36:7 NKJV)

“He who dwells in the secret place of the Most High Shall abide under the shadow of the Almighty.” (Psalms 91:1 NKJV)

Ian’s “Moment” wasn’t so long this time. Thanks, Ian, for another interesting article about a beautiful bird.

Ian’s last Bird of the Moment was about the Gentoo Penguin.

Ian’s Bird of the Week Articles