There weren’t any owls on our must-see lists for Brazil and Chile because we weren’t particularly expecting to see any. However, we ended up seeing two species at opposite ends of the size scale: the largest Brazilian owl, Great Horned Owl, and one of the smallest, the Ferruginous Pygmy Owl.

The Great Horned Owl – splendidly named the Grand-duc d’Amérique in French – is seriously big, with females, larger than males, being up to 60cm/24in in length, 1.5kg/53oz in weight, with a wing span of up to 1.5m/5ft. The Ferruginous Pygmy Owl, by comparison tiny with the (smaller) males being as short as 15cm/6in, as light as 46g/1.6oz with an average wing span of 38cm/15in. 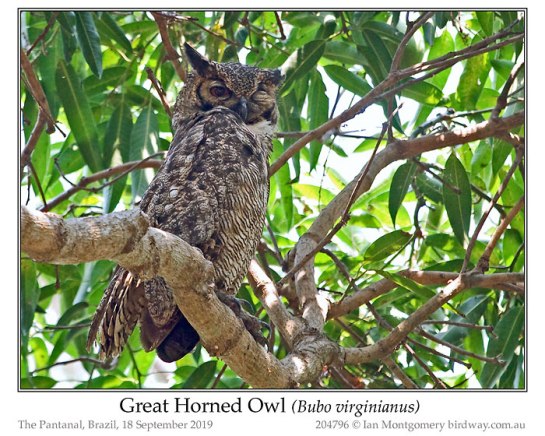 Great Horned Owls feed mainly on mammals but are versatile and will take birds from small passerines up to geese and Great Blue Herons. Ferruginous Pygmy Owls are also versatile, make up for their small size by being quite aggressive and taking anything from insects to birds much bigger than themselves. 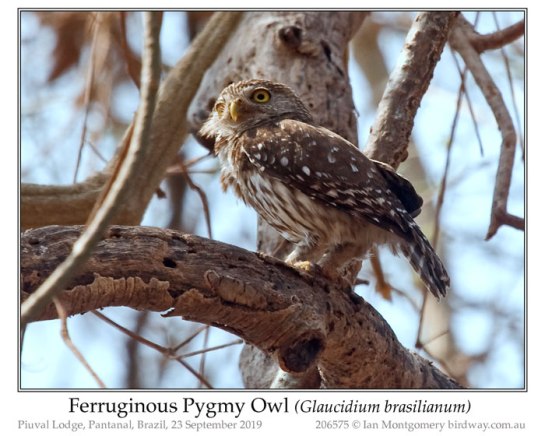 Their versatile diets mean both species are very adaptable and have huge ranges in the Americas. The range of the Great Horned Owl extends from Alaska and northern Canada through Central and South America as far as northern Argentina, though it sizes restricts it to hunting in open areas and it avoids rainforests such as the Amazon Basin.

The Ferruginous Pygmy Owl ranges from southern Arizona through Central America and most of South America east of the Andes (including the Amazon Basin), also as far as northern Argentina. Both incidentally illustrate the taxonomic folly of using geographical areas in names, the specific name of one referring to the American state of Virginia, and the other to Brazil. 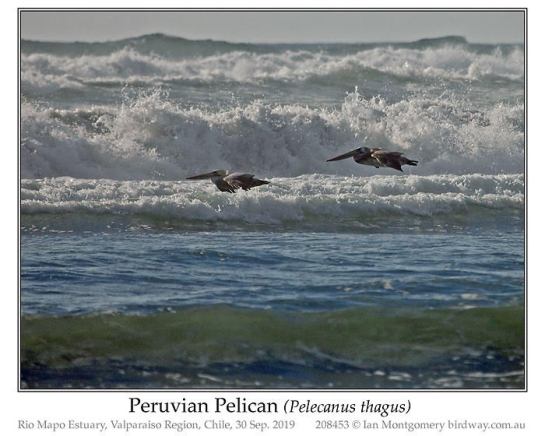 You probably know by now that I’m attracted to symbols, hence the owls. I couldn’t resist using avian symbols of wisdom as we celebrate the beginning of a new year and a new decade. The last decade seems to have been singularly lacking in wisdom in politics and leadership, and I hope for better in the twenties. At the same time we need to be optimistic and not lose our sense of fun, so I’m sharing the experience Trish and I enjoyed of watching Peruvian Pelicans on the coast of Chile – another lesson in names – apparently enjoying skimming over the waves in the late afternoon.

On the subject of wisdom, I read an article on the (Australian) ABC website today on whether the decade actually starts on the first of January 2020 or 2021. At the start of the millennium I was one of the pedants who felt it started in 2001, but I’ve shifted my ground. I like this quote from a comment on the article by Professor Hans Noel:

“Wisdom is knowing that we started this system in the middle, it’s socially constructed anyway, and it feels right to treat ‘1 to 10’ as a decade, so that’s what we do.”

The ABC Language researcher Tiger Webb had the final word:

“What’s often missing from this discussion is that all calendrical systems are abstractions of human arrogance in the face of an indifferent universe.”

Well, now there is an interesting take on this new year.

I do know that according to the Bible, there was a year zero (0):

“For in six days the LORD made heaven and earth, the sea, and all that in them is, and rested the seventh day: wherefore the LORD blessed the sabbath day, and hallowed it.”
(Exodus 20:11 KJV)

That was when TIME as we know it began.

“Go to now, ye that say, To day or to morrow we will go into such a city, and continue there a year, and buy and sell, and get gain: Whereas ye know not what shall be on the morrow. For what is your life? It is even a vapour, that appeareth for a little time, and then vanisheth away. For that ye ought to say, If the Lord will, we shall live, and do this, or that.” (James 4:13-15 KJV)

Ian’s Bird of the Week – Moments