Want a Home in the Mountains?   Some Northern Flickers Have One!

Mountains are wonderful places to see God’s handiwork, including the many birds dwelling in (and around) mountains year-round or seasonally.  Some of my best bird-watching has been done in mountains, usually the Rocky Mountains or Appalachians. (This birding report notes the Rocky Mountains’ Northern Flicker.)

Of specific mountain ranges, one of my all-time favorite mountain ranges is the Sangre de Cristo Range, northern part of the Sangre de Cristo Mountains (themselves a range within the Rocky Mountains) that runs north-to-south in southern Colorado, spilling into northern New Mexico.  Within that range my favorite mountain is Horn Peak, near Horn Creek Christian Family Camp (where Dr. Stan Toussaint occasionally taught the Scriptures) and Sangre de Cristo Seminary, not far outside of Westcliffe, Colorado.  The elevation there ranges about 8500 feet, with Horn Peak peaking at about 14,000 feet!

“Sangre de Cristo” is Spanish for “blood of Christ”, perhaps an indication that the range was named when its snow-capped mountains were reflecting a scarlet-hued sunset.  In any case, it’s magnificently beautiful out there.

Much of Colorado’s Sangre de Cristo Range is located within two of America’s national forests:  San Isabel National Forest (containing the range’s northeastern portion), and the Rio Grande National Forest (containing most of the southwestern portion, i.e., the San Luis Valley).   Amazingly, the Sangre de Cristo Mountains border a very unusual inland sand dunes area (the largest in North America), the Great Sand Dunes National Park and Preserve.   By the way, where did all that sand come from?  (Hint: check out Genesis chapters 6-9.)

In the montane forests on the slope of Horn Peak (and Little Horn Peak) there is a Protestant Reformation-based seminary named “Sangre de Cristo Seminary”, founded by Dr. Dwight F. Zeller.  (FYI: its website is http://sdcs76.org/  — which includes a music-enhanced PowerPoint slide show on its homepage.)

If you drive up to the entrance of the seminary campus, especially in the summer, roll down your car’s windows – and listen.  Actually, park your car and find a “blind” where you can observe the trees around you – if you stay still for a while you are likely to see the varied bird life of those montane evergreen forests.  One bird that you may hear before you see it, the Northern Flicker (Colaptes auratus), because a stone’s throw from the seminary’s mountain road entrance, which is thick with evergreen trees, is (or at least “was” – in the late AD1990s) a tree that served as the home of a Northern Flicker family.  Many summer days, during the mid-to-late AD1990s, I have found a comfortable place to sit, there – hidden — so that I could observe that Northern Flicker tree-home, without being observed by the Northern Flickers that continually went in and out, in and out, therefrom.

Flickers routinely convert a tree into a tree-house!

Says ornithologist Mary Taylor Gray, in her book WATCHABLE BIRDS OF THE ROCKY MOUNTAINS (Mountain Press Publishing, 1992), at pages 30, “Flickers nest in holes in trees, fenceposts, telephone poles and the like, excavating the nest hole by pecking.  They are important homebuilders for other cavity-nesting birds who, with bills too weak to make their own holes, use those abandoned by woodpeckers.  Both the male and the female flicker incubate the eggs and care for the young [hatchlings].  When the adults bring food to the nest, they light on the tree, then disappear into the nest cavity.  As the babies get older, they learn to expect the parents, poking their heads out of the nest and squawking to be fed.”  That description of Northern Flicker behavior (with illustrative photographs on page 31), by Mary Taylor Gray, perfectly fits what I have observed (and what my wife observed), summer after summer, at Sangre de Cristo Seminary’s campus.

But what were those woodpeckers eating?

Bugs of all kinds strive in the Sangre de Cristo montane forests, crawling on the ground and in trees and bushes – the bugs are very active there during the summer – and that’s fine for flickers!  Says ornithologist Stan Tekiela, in his book  BIRDS OF COLORADO FIELD GUIDE (Adventure Publications, 2001), on page 147, “The flicker is the only woodpecker to regularly feed on the ground, preferring ants and beetles.  Produces antacid saliva [without the need for Nexium!] to neutralize the acidic defense of ants.”  (Although such a diet would bug me, the flickers seem to enjoy it.)

The two main varieties are the “red-shafted” and “yellow-shafted” forms, though hybridized  versions occur where the ranges overlap, in the western edge of the great plains (where the prairies merge into the Rocky Mountains), and this Northern Flicker looked like such a hybrid.  After my wife and I watched it go into its tree-hole, again and again, we suddenly learned why that tree-hole was the scene of such repeated in-and-out activity:  cautiously baby flickers poked their little heads out, perhaps curious about the outside world, or maybe in hopes that the next airborne meal was soon headed home! 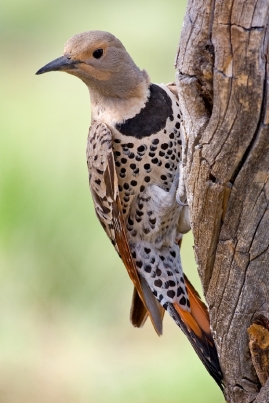 In recalling those cool summer days, when I watched for birds in the montane forests by Sangre de Cristo Seminary – sometimes with my wife, sometimes alone – I realized that all around me the hungry were being fed.  Baby flickers were being fed by their woodpecker parents.  But also seminary students, instructed by godly teachers, were being fed the Word of God (Deuteronomy 8:3, quoted in Matthew 4:4 & Luke 4:4.)

Thanks, James for a very interesting article to share with us. Love those Flickers.

Northern Flicker – All About Birds