APPRECIATING  WHITE  IBISES   (AND  OTHER  BIRDS  IN  FLORIDA) 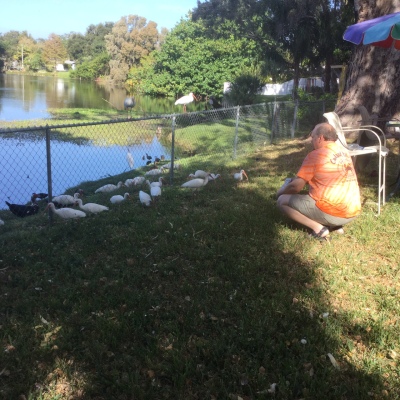 All flesh is not the same flesh: but there is one kind of flesh of men, another flesh of beasts, another of fishes, and another of birds. (1st Corinthians 15:39)

Christian birdwatchers can enjoy the variety that God has given to our planet, including many different animal kinds, and a multifarious diversity within that larger diversity, such as the enormous variety that we can see in the realm of birds. [See “Valuing God’s Variety”, posted at http://www.icr.org/article/valuing-gods-variety .]  One such example follows, viewed (and appreciated) in coastal Florida, on a day when I saw more than 2 dozen different birds.  The American White Ibis (Eudocimus albus) — a/k/a White Ibis — is a wading shorebird that frequents the shorelands of America’s Southeast coastlines, clockwise from Virginia’s shores to those of the Gulf of Mexico, from Florida to Texas (and south of that, e.g., Mexico and the Caribbean islands).

And St. Petersburg (Florida) is not deficient when it comes to the White Ibis. 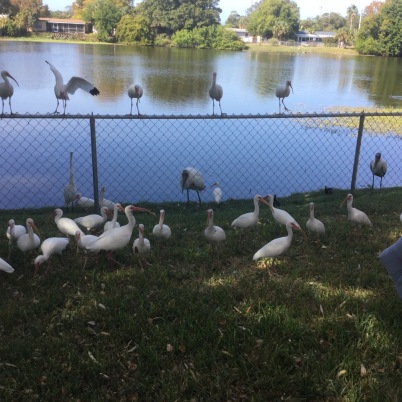 These waders are easy to recognize – their plumage is all white, except for black wingtips (usually visible only when their wings are outstretched, as in flight); also, they have long, thin red legs (with knees that bend backwards), a long, decurved (i.e., curved downward) reddish-orange bill, and a red face. The White Ibis probes in shallow water with its bill, feeling around for potential prey.

[The White Ibis] uses freshwater or saltwater wetlands and the nearby open shallow water [as hunting grounds, when seeking food].

Feeding is primarily by rapid, tactile probing in exposed or submerged mud while slowly walking. Ibises may also sweep the partially open bill form side to side in water over 10 cm (4 in) deep, snapping down when they feel a prey item. The sweep feeding may be accompanied by foot stirring to scare fish and crustaceans [like crayfish] up into the water column, and/or fully extending a wing to shade the water and provided a perceived refuge for fish. They take advantage of almost any ephemeral source of food and may be seen probing in shallow marshes, willow or sawgrass-lined ponds, the soggy spots of an interstate highway median, or wet agricultural land. This ibis [i.e., the White Ibis] usually feeds in flocks [e.g., a dozen or more]. When feeding on the exposed soil surface, they select their prey items by vision rather than by feel.

Prey includes small crabs (particularly hermit crabs), aquatic insects and [their] larvae, crayfish, snails, clams, worms, frogs, and small fish. They become particularly adept at catching coquina clams exposed at the surface by strong surf. Small prey is swallowed with a forward thrust of the head, while larger items are dismembered by stabbing and biting. Indigestible parts are cast as pellets. Ibises steal large prey from each other [shame on them!] and are sometimes the thief and sometimes the victim with other wading birds [such as the Wood Stork].

Other wading birds as well as kingfishers use feeding ibises as beaters to flush [out] prey, and ibises [like cattle egrets] use livestock [such as cattle] as beaters. Nestling become salt stressed when fed prey from salt water or brackish water; thus, accessible shallow freshwater feeding sites are required for successful reproduction [of thriving offspring].

Recent studies have shown that the White Ibis and [the] Glossy Ibis partition food resources by [non-competitively – so much for Darwinist “survival-of-the-fittest” theory!] selecting different foods when feeding outside the breeding season. White Ibises feeding in flooded ricefields avoid competition by feeding selectively in muddy fields on 48% crabs, 37% aquatic insects, and 15% fish. The Glossy Ibis feeds in shallow flooded fields on a diet composed of 58% grains, 26% insects, and 15% crabs.

The White Ibis belongs to the same created “kind” (see Genesis 1:21) as the brilliant-vermillion-colored Scarlet Ibis (Eudocimus ruber), which it is known to hybridize with, e.g., in central Venezuela and coastal Colombia. 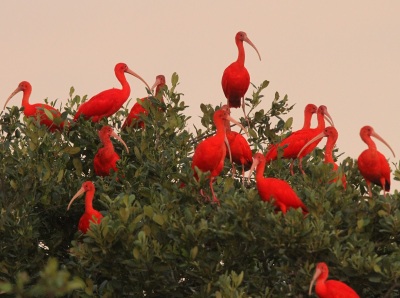 White Ibises are usually wild (i.e., non-domesticated), probing beaches and pondshores for prey, such as small fish, aquatic insects, and their favorite marsh-water crustacean: crayfish!   However, ibises are teachable!  —  they can easily learn to trust kind-hearted humans, such as those who feed them bread crumbs in Florida.  [For an example, see Lee Dusing’s “Birdwatching at Lake Morton, Finally”.] 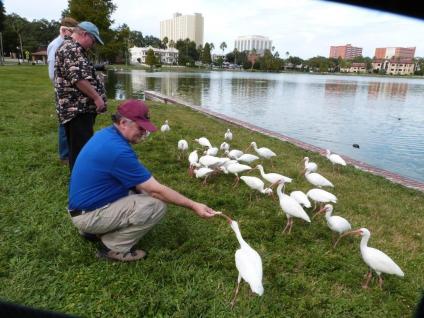 Some may actually eat from your hand; others may keep a “safe” distance as they rush forward to grab up bread morsels tossed to them, at parks or in backyards. These shorebirds also search the lawns of residential properties, seeking (and often finding) large insects – such as beetles – to acquire needed protein-rich food. 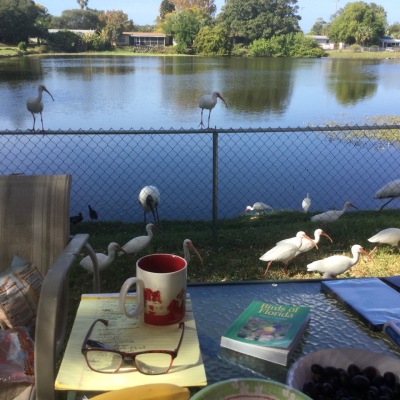 During 3 days following Thanksgiving (in AD2016) – Sunday, Monday, and Tuesday – I was privileged to see and feed White Ibis visitors who came to the backyard of Chaplain Bob and Marcia Webel, in St. Petersburg (Florida).

What a variety-filled birdwatching bonanza it was!

On the Monday following Thanksgiving (i.e., 11-28-AD2016), I observed – in addition to more than a dozen White Ibises (unto many of which I fed bread crumb and/or popcorn) – the following birds, on the pond (they say “lake”) behind the Webels’ house, either in the pondwater or on the pondshores:  Muscovy Duck; Mallard; Double-crested Cormorant; Osprey (a/k/a Fish Hawk); Roseate Spoonbill; Wood Stork; Snowy Egret; Great White Egret; Belted Kingfisher; some green parrots (these were dark-headed, but otherwise green); Anhinga, Great Blue Heron; Green Heron; Tri-colored Heron [a/k/a Louisiana Heron]; Pied-billed Grebe; Black Vulture; Common Moorhen [a/k/a Swamp Chicken — what Lee Dusing calls the “Candy Corn Bird”, due to its red bill that is tipped with yellow]; and Boat-tailed Grackle.  Breadcrumbs are preferred over popcorn, as far as avian appetites were concerned, at least by White Ibises and Wood Storks – although turtles were happy to snap up popcorn that landed in the pond’s shallow shorewaters.

Also, I saw a dark-colored River Otter in the wild – occasionally surfacing and re-surfacing near the center of the pond.  (Never before had I seen one in the wild, so Marcia Webel prayed that I would get to see one during this visit.)  And, at least once, I had a good view of the otter’s face, as he surfaced to eat something he (or she) had caught.

In the front yard we also heard (and later saw) a Blue Jay. Later that day, at Madeira Beach/John’s Pass, I also saw Brown Pelicans, various seagulls, and a few dolphins. 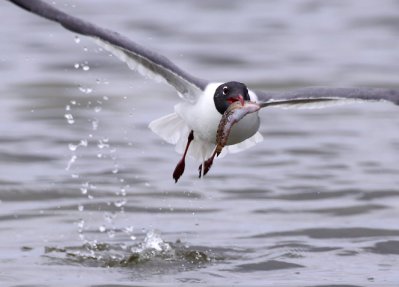 On Tuesday morning we saw many of the same birds (as seen on Monday), on or near the same pond – plus Ring-billed Gulls, a very noisy Limpkin, and a Red-shouldered Hawk. Later on Tuesday, at Passa-Grille Beach, I saw Rock Doves (i.e., pigeons), Laughing Gulls, Caspian Terns, and some kind of sandpipers.

As Chaplain Bob noted, every birdwatching day (in the Webel backyard) is similar to other such days, in many ways, yet every birdwatching day is also uniquely different.  (That reminds me of snowflakes — they are all similar, yet also unique.  In fact, that is much moreso true of us humans — we have much in common, yet God made each of us unique.)

That’s a lot of variety squashed into a couple of fast-flying days in St. Petersburg.

Now that was a birdwatching adventure, reminding me how God loves variety — even among birds!