The Bird of the Morning.

Yes, my dear readers, I am the bird of the morning. Very few of you rise early enough to hear my first song. By the time you are awake our little ones have had their breakfast, Mrs. Robin and I have had our morning bath and we are all ready to greet you with our morning song.

I wonder if any of you have seen our nest and can tell the color of the eggs that Mrs. Robin lays. Some time I will let you peep into the nest and see them, but of course you will not touch them.

I wonder, too, if you know any of my cousins—the Mocking bird, the Cat-bird or the Brown Thrush—I think I shall ask them to have their pictures taken soon and talk to you about our happy times.

Did you ever see one of my cousins on the ground? I don’t believe you can tell how I move about. Some of you may say I run, and some of you may say I hop, and others of you may say I do both. Well, I’ll tell you how to find out. Just watch me and see. My little friends up north won’t be able to see me though until next month, as I do not dare leave the warm south until Jack Frost leaves the ground so I can find worms to eat.

I shall be about the first bird to visit you next month and I want you to watch for me. When I do come it will be to stay a long time, for I shall be the last to leave you. Just think, the first to come and last to leave. Don’t you think we ought to be great friends? Let us get better acquainted when next we meet. Your friend,
Robin. 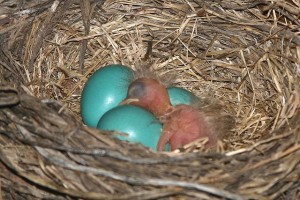 How do the robins build their nest?
Robin Red Breast told me,
First a wisp of yellow hay
In a pretty round they lay;
Then some shreds of downy floss,
Feathers too, and bits of moss,
Woven with a sweet, sweet song,
This way, that way, and across:
That’s what Robin told me.

Where do the robins hide their nest?
Robin Red Breast told me,
Up among the leaves so deep,
Where the sunbeams rarely creep,
Long before the winds are cold,
Long before the leaves are gold
Bright-eyed stars will peep and see
Baby Robins—one, two, three:
That’s what Robin told me. 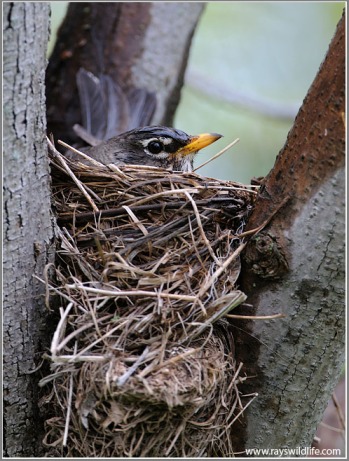 “Come, sweetest of the feathered throng.”

UR American Robin must not be confounded with the English Robin Redbreast, although both bear the same name. It is the latter bird in whose praise so much has been written in fable and song. The American Robin belongs to the Thrush family; the Mocking bird, Cat-bird and Brown Thrush, or Thrasher, being other familiar children. In this family, bird organization reaches its highest development. This bird is larger than his English cousin the Redbreast and many think has a finer note than any other of the Thrush family.

The Robin courts the society of man, following close upon the plow and the spade and often becoming quite tame and domestic. It feeds for a month or two on strawberries and cherries, but generally on worms and insects picked out of the ground. It destroys the larvae of many insects in the soil and is a positive blessing to man, designed by the Creator for ornament and pleasure, and use in protecting vegetation. John Burroughs, the bird lover, says it is the most native and democratic of our birds.

It is widely diffused over the country, migrating to milder climates in the Winter. We have heard him in the early dawn on Nantucket Island welcoming the coming day, in the valleys of the Great and the little Miami, in the parks of Chicago, and on the plains of Kansas, his song ever cheering and friendly. It is one of the earliest heralds of Spring, coming as early as March or April, and is one of the latest birds to leave us in Autumn. Its song is a welcome prelude to the general concert of Summer.

“When Robin Redbreast sings,
We think on budding Springs.”

The Robin is not one of our most charming songsters, yet its carol is sweet, hearty and melodious. Its principal song is in the morning before sunrise, when it mounts the top of some tall tree, and with its wonderful power of song, announces the coming of day. When educated, it imitates the sounds of various birds, and even sings tunes. It must be amusing to hear it pipe out so solemn a strain as Old Hundred.

It has no remarkable habits. It shows considerable courage and anxiety for its young, and is a pattern of propriety when keeping house and concerned with the care of its offspring. Two broods are often reared out of the same nest. In the Fall these birds become restless and wandering, often congregating in large flocks, when, being quite fat, they are much esteemed as food.

The Robin’s nest is sometimes built in a corner of the porch, but oftener it is saddled on the horizontal limb of an orchard tree. It is so large and poorly concealed that any boy can find it, yet it is seldom molested. The Robin is not a skillful architect. The masonry of its nest is rough and the material coarse, being composed largely of leaves or old grass, cemented with mud. The eggs number four to six and are greenish blue in color.

An observer tells the following story of this domestic favorite:

“For the last three years a Robin has nested on a projecting pillar that supports the front piazza. In the Spring of the first year she built her nest on the top of the pillar—a rude affair—it was probably her first effort. The same season she made her second nest in the forks of an Oak, which took her only a few hours to complete.

“She reared three broods that season; for the third family she returned to the piazza, and repaired the first nest. The following Spring she came again to the piazza, but selected another pillar for the site of her domicile, the construction of which was a decided improvement upon the first. For the next nest she returned to the Oak and raised a second story on the old one of the previous year, but making it much more symmetrical than the one beneath. The present season her first dwelling was as before, erected on a pillar of the piazza—as fine a structure as I ever saw this species build. When this brood was fledged she again repaired to the Oak, and reared a third story on the old domicile, using the moss before mentioned, making a very elaborate affair, and finally finishing up by festooning it with long sprays of moss. This bird and her mate were quite tame. I fed them with whortleberries, which they seemed to relish, and they would come almost to my feet to get them.”

The amount of food which the young robin is capable of absorbing is enormous. A couple of vigorous, half-grown birds have been fed, and in twelve hours devoured ravenously, sixty-eight earth worms, weighing thirty-four pennyweight, or forty-one per cent more than their own weight. A man at this rate should eat about seventy pounds of flesh per day, and drink five or six gallons of water.

The following poem by the good Quaker poet Whittier is sweet because he wrote it, interesting because it recites an old legend which incidentally explains the color of the robin’s breast, and unique because it is one of the few poems about our American bird.

My old Welsh neighbor over the way
Crept slowly out in the sun of spring,
Pushed from her ears the locks of gray,
And listened to hear the robin sing.

Her grandson, playing at marbles, stopped,
And—cruel in sport, as boys will be—
Tossed a stone at the bird, who hopped
From bough to bough in the apple tree.

“Nay!” said the grandmother; “have you not heard,
My poor, bad boy! of the fiery pit,
And how, drop by drop, this merciful bird
Carries the water that quenches it?

“He brings cool dew in his little bill,
And lets it fall on the souls of sin:
You can see the mark on his red breast still
Of fires that scorch as he drops it in.

“My poor Bron rhuddyn! my breast-burned bird,
Singing so sweetly from limb to limb,
Very dear to the heart of Our Lord
Is he who pities the lost like Him.”

“Amen!” I said to the beautiful myth;
“Sing, bird of God, in my heart as well:
Each good thought is a drop wherewith
To cool and lessen the fires of hell.

“Prayers of love like rain-drops fall,
Tears of pity are cooling dew,
And dear to the heart of Our Lord are all
Who suffer like Him in the good they do.”

Robins have always been special. I suppose it was one of the first birds that I knew by name. Not that I was a birdwatcher back in my youth. Wish I had started back then.

Like the article mentioned, the American Robin is actually in the Turdidae – Thrushes Family of Passerines which has 184 members. There is another family of Robins and they are in the Chats, Old World Flycatchers – Muscicapidae Family which has 297 species. Wikipedia has this to say about these Robins: 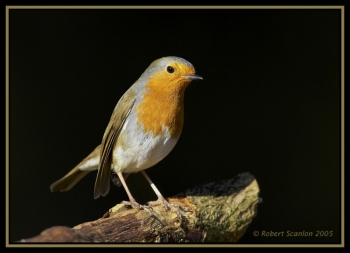 “The European Robin (Erithacus rubecula), most commonly known in Anglophone Europe simply as the Robin, is a small insectivorous passerine bird that was formerly classed as a member of the thrush family (Turdidae), but is now considered to be an Old World flycatcher (Muscicapidae). Around 12.5–14.0 cm (5.0–5.5 in) in length, the male and female are similar in colouration, with an orange breast and face lined with grey, brown upperparts and a whitish belly. It is found across Europe, east to Western Siberia and south to North Africa; it is sedentary in most of its range except the far north.

The term Robin is also applied to some birds in other families with red or orange breasts. These include the American Robin (Turdus migratorius), which is a thrush, and the Australian red robins of the genus Petroica, members of a family whose relationships are unclear.” They are the Petroicidae – Australasian Robins Family with 46 species.

Hope you enjoy seeing the three different “Robin Families.” I am thankful the the Lord let at least three different continents have their very own “Robin.” He told the birds to multiply and fill up the earth. They seemed to have obeyed, were we that obedient.

Next Article – The Kingfisher – The Lone Fisherman