“Not an inch of his body is free from delight.
Can he keep himself still if he would? Oh, not he!
The music stirs in him like wind through a tree.”

HE well known Meadow or Old Field Lark is a constant resident south of latitude 39, and many winter farther north in favorite localities. Its geographical range is eastern North America, Canada to south Nova Scotia, Quebec, and Ontario to eastern Manitoba; west to Minnesota, Iowa, Missouri, eastern Kansas, the Indian Territory, and Texas; south to Florida and the Gulf coast, in all of which localities, except in the extreme north, it usually rears two or three broods in a season. In the Northern States it is only a summer resident, arriving in April and remaining until the latter part of October and occasionally November. Excepting during the breeding season, small flocks may often be seen roving about in search of good feeding grounds. Major Bendire says this is especially true in the fall of the year. At this time several families unite, and as many as two dozen may occasionally be flushed in a field, over which they scatter, roaming about independently of each other. When one takes wing all the others in the vicinity follow. It is a shy bird in the East, while in the middle states it is quite the reverse. Its flight is rather laborious, at least in starting, and is continued by a series of rapid movements of the wings, alternating with short distances of sailing, and is rarely protracted. On alighting, which is accompanied with a twitching of its tail, it usually settles on some fence rail, post, boulder, weedstock, or on a hillock in a meadow from which it can get a good view of the surroundings, and but rarely on a limb of a tree. Its favorite resorts are meadows, fallow fields, pastures, and clearings, but in some sections, as in northern Florida, for instance, it also frequents the low, open pine woods and nests there.

The song of the Meadow Lark is not much varied, but its clear, whistling notes, so frequently heard in the early spring, are melodious and pleasing to the ear. It is decidedly the farmers’ friend, feeding, as it does, on noxious insects, caterpillars, moths, grasshoppers, spiders, worms and the like, and eating but little grain. The lark spends the greater part of its time on the ground, procuring all its food there. It is seldom found alone, and it is said remains paired for life.

Nesting begins in the early part of May and lasts through June. Both sexes assist in building the nest, which is always placed on the ground, either in a natural depression, or in a little hollow scratched out by the birds, alongside a bunch of grass or weeds. The nest itself is lined with dry grass, stubble, and sometimes pine needles. Most nests are placed in level meadows. The eggs and young are frequently destroyed by vermin, for the meadow lark has many enemies. The eggs vary from three to seven, five being the most common, and both sexes assist in the hatching, which requires about fifteen or sixteen days. The young leave the nest before they are able to fly—hiding at the slightest sign of danger. The Meadow Lark does not migrate beyond the United States. It is a native bird, and is only accidental in England. The eggs are spotted, blotched, and speckled with shades of brown, purple and lavender. A curious incident is told of a Meadow Lark trying to alight on the top mast of a schooner several miles at sea. It was evidently very tired but would not venture near the deck. 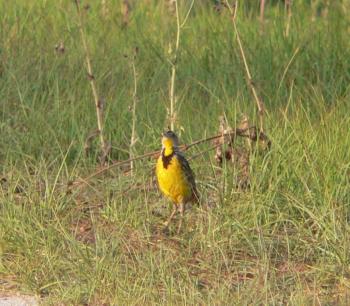 Circle B – Eastern Meadowlark by Lee

I told the man who wanted my picture that he could take it if he would show my nest and eggs. Do you blame me for saying so? Don’t you think it makes a better picture than if I stood alone?

Mr. Lark is away getting me some breakfast, or he could be in the picture, too. After a few days I shall have some little baby birds, and then won’t we be happy.

Boys and girls who live in the country know us pretty well. When they drive the cows out to pasture, or when they go out to gather wild flowers, we sit on the fences by the roadside and make them glad with our merry song.

Those of you who live in the city cannot see us unless you come out into the country.

It isn’t very often that we can find such a pretty place for a nest as we have here. Most of the time we build our nest under the grass and cover it over, and build a little tunnel leading to it. This year we made up our minds not to be afraid.

The people living in the houses over there do not bother us at all and we are so happy.

You never saw baby larks, did you? Well, they are queer little fellows, with hardly any feathers on them.

Last summer we had five little birdies to feed, and it kept us busy from morning till night. This year we only expect three, and Mr. Lark says he will do all the work. He knows a field that is being plowed, where he can get nice, large worms.

Hark! that is he singing. He will be surprised when he comes back and finds me off the nest. He is so afraid that I will let the eggs get cold, but I won’t. There he comes, now. 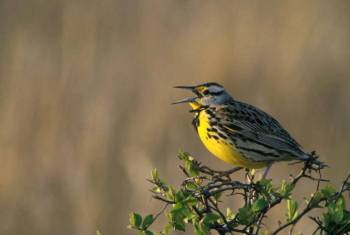 For ye shall go out with joy, and be led forth with peace: the mountains and the hills shall break forth before you into singing, and all the trees of the field shall clap their hands. (Isaiah 55:12 KJV)

Meadowlarks are birds belonging to the genus Sturnella in the New World family Icteridae. The two here in the U. S. are the Eastern and Western Meadowlarks. Very southern US can see the Lillian’s

This genus includes two species of largely insectivorous grassland birds. In all species the male at least has a black or brown back and extensively red or yellow underparts.
The genus Sturnella comprises: 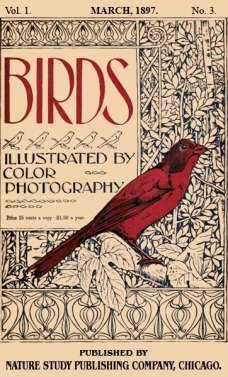