HE name of the Long-Eared Owl is derived from the great length of his “ears” or feather-tufts, which are placed upon the head, and erect themselves whenever the bird is interested or excited. It is the “black sheep” of the owl family, the majority of owls being genuine friends of the agriculturist, catching for his larder so many of the small animals that prey upon his crops. In America he is called the Great Horned Owl—in Europe the Golden Owl. (Today it is the Eurasian Eagle-Owl, I believe.)

Nesting time with the owl begins in February, and continues through March and April. The clown-like antics of both sexes of this bird while under the tender influence of the nesting season tend somewhat to impair their reputation for dignity and wise demeanor. They usually have a simple nest in a hollow tree, but which seems seldom to be built by the bird itself, as it prefers to take the deserted nest of some other bird, and to fit up the premises for its own use. They repair slightly from year to year the same nest. The eggs are white, and generally four or five in number. While the young are still in the nest, the parent birds display a singular diligence in collecting food for them.

If you should happen to know of an owl’s nest, stand near it some evening when the old birds are rearing their young. Keep quiet and motionless, and notice how frequently the old birds feed them. Every ten minutes or so the soft flap, flap of their wings will be heard, the male and female alternately, and you will obtain a brief glimpse of them through the gloom as they enter the nesting place. They remain inside but a short time, sharing the food equally amongst their brood, and then are off again to hunt for more. All night, were you to have the inclination to observe them, you would find they pass to and fro with food, only ceasing their labors at dawn. The young, as soon as they reach maturity, are abandoned by their parents; they quit the nest and seek out haunts elsewhere, while the old birds rear another, and not infrequently two more broods, during the remainder of the season.

The habits of the Long-Eared Owl are nocturnal. He is seldom seen in the light of day, and is greatly disturbed if he chance to issue from his concealment while the sun is above the horizon. The facial disk is very conspicuous in this species. It is said that the use of this circle is to collect the rays of light, and throw them upon the eye. The flight of the owl is softened by means of especially shaped, recurved feather-tips, so that he may noiselessly steal upon his prey, and the ear is also so shaped as to gather sounds from below.

The Long-Eared Owl is hardly tameable. The writer of this paragraph, when a boy, was the possessor, for more than a year, of a very fine specimen. We called him Judge. He was a monster, and of perfect plumage. Although he seemed to have some attachment to the children of the family who fed him, he would not permit himself to be handled by them or by any one in the slightest. Most of his time he spent in his cage, an immense affair, in which he was very comfortable. Occasionally he had a day in the barn with the rats and mice.

The owl is of great usefulness to gardener, agriculturist, and landowner alike, for there is not another bird of prey which is so great a destroyer of the enemies of vegetation.

We know not alway
Who are kings by day,
But the king of the night is the bold brown owl!

I wonder why the folks put my picture last in the book. It can’t be because they don’t like me, for I’m sure I never bother them. I don’t eat the farmer’s corn like the crow, and no one ever saw me quarrel with other birds.

Did you ever see any other bird sit up as straight as I do? I couldn’t sit up so straight if I hadn’t such long, sharp claws to hold on with.

My home is in the woods. Here we owls build our nests—most always in hollow trees.

During the day I stay in the nest or sit on a limb. I don’t like day time for the light hurts my eyes, but when it begins to grow dark then I like to stir around. All night long I am wide awake and fly about getting food for my little hungry ones. They sleep most of the day and it keeps me busy nearly all night to find them enough to eat.

I just finished my night’s work when the man came to take my picture. It was getting light and I told him to go to a large stump on the edge of the woods and I would sit for my picture. So here I am. Don’t you think I look wise? How do you like my large eyes? If I could smile at you I would, but my face always looks sober. I have a great many cousins and if you really like my picture, I’ll have some of them talk to you next month. I don’t think any of them have such pretty feathers though. Just see if they have when they come.

Well, I must fly back to my perch in the old elm tree. Good-bye.

In the hollow tree, in the old gray tower,
The spectral owl doth dwell;
Dull, hated, despised in the sunshine hour,
But at dusk he’s abroad and well!
Not a bird of the forest e’er mates with him;
All mock him outright by day;
But at night, when the woods grow still and dim,
The boldest will shrink away!

O! when the night falls, and roosts the fowl,
Then, then, is the reign of the Horned Owl!

And the owl hath a bride, who is fond and bold,
And loveth the wood’s deep gloom;
And, with eyes like the shine of the moonstone cold,
She awaiteth her ghastly groom.
Not a feather she moves, not a carol she sings,
As she waits in her tree so still,
But when her heart heareth his flapping wings,
She hoots out her welcome shrill!

O! when the moon shines, and dogs do howl,
Then, then, is the joy of the Horned Owl!

Mourn not for the owl, nor his gloomy plight!
The owl hath his share of good—
If a prisoner he be in the broad daylight,
He is lord in the dark greenwood!
Nor lonely the bird, nor his ghastly mate,
They are each unto each a pride;
Thrice fonder, perhaps, since a strange, dark fate
Hath rent them from all beside!

So, when the night falls, and dogs do howl,
Sing, Ho! for the reign of the Horned Owl!
We know not alway
Who are kings by day,
But the King of the Night is the bold Brown Owl! 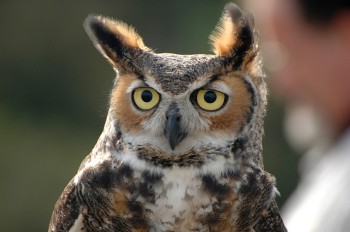 Our Owl friend is a Bird of the Bible also. Owls are mentioned in 8 to 9 verses in Scripture, depending on which version. The KJV has 8 “owl” and 1 “owls” mentioned. The “horned owl” is mentioned in several versions. They are also one of the Birds of Prey mentioned in the Bible.

The Owls belong to two families, the  Strigidae – Owl which has the “True Owls” and the  Tytonidae – Barn Owls. The two families make up the Strigiformes Order.

Adults have large ear tufts, a reddish, brown or gray face and a white patch on the throat. The iris is yellow, except the amber-eyed South American Great Horned Owl (B. V. nacurutu). Its “horns” are neither ears nor horns, simply tufts of feathers. The underparts are light with brown barring; the upper parts are mottled brown. The legs and feet are covered in feathers up to the talons. There are individual and regional variations in color; birds from the sub-Arctic are a washed-out, light-buff color, while those from Central America can be a dark chocolate brown.

Their call is a low-pitched but loud ho-ho-hoo hoo hoo; sometimes it is only four syllables instead of five. The female’s call is higher and rises in pitch at the end of the call. Young owls make hissing or screeching sounds that are often confused with the calls of Barn Owls.

Owls were given spectacular binocular vision allowing them to pinpoint prey and see in low light. The eyes of Great Horned Owls are nearly as large as those of humans and are immobile within their circular bone sockets. Instead of turning their eyes, they turn their heads. Therefore, their neck must be able to turn a full 270 degrees in order to see in other directions without moving its entire body.

An owl’s hearing is as good as – if not better than – its vision; they have better depth perception[citation needed] and better perception of sound elevation (up-down direction) than humans. This is due to owl ears not being placed in the same position on either side of their head: the right ear is typically set higher in the skull and at a slightly different angle. By tilting or turning its head until the sound is the same in each ear, an owl can pinpoint both the horizontal and vertical direction of a sound. 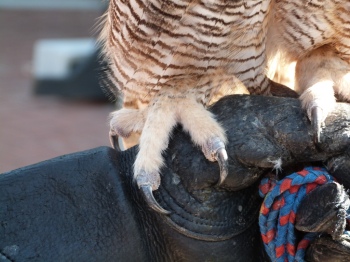 These birds hunt at night by waiting on a high perch and swooping down on prey. Prey can vary greatly based on opportunity. The predominant prey group are small to medium-sized mammals such as hares, rabbits (statistically the most regular prey, juvenile raccoons, rats, squirrels, mice, moles, voles, shrews, bats, armadillos, muskrats, weasels and gerbils. It is even a natural predator of prey two to three times heavier than itself such as porcupines, marmots and skunks. Birds also comprise a large portion of a Great Horned Owl’s diet, ranging in size from kinglets to Great Blue Herons. Waterbirds, especially coots and ducks, are hunted; even raptors, up to the size of Red-tailed Hawk and Snowy Owls, are sometimes taken. Regular avian prey includes woodpeckers, grouse, crows, pigeons, herons, gulls, quail, turkey and various passerines. Reptiles (to the size of young American alligators, amphibians, fish, crustaceans and even insects are only occasional prey. In addition, the Great Horned Owl will predate on domesticated cats and small or young dogs.

When the Lord has created these birds Hi also gave them 200–300 pounds per square inch of crushing power in their talons. An average adult human male has about 60 pounds per square inch in his hands. In northern regions, where larger prey that cannot be eaten quickly are most prevalent, they may let uneaten food freeze and then thaw it out later using their own body heat. They also tend to eat and regurgitate food in the same locations. 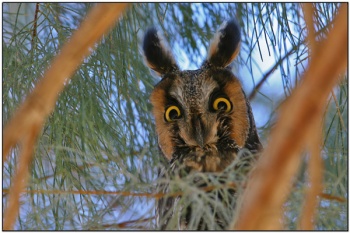 Next Article – The Rose-Breasted Grosbeak

Birds of the Bible – Owls