AMBEL’S PARTRIDGE, of which comparatively little is known, is a characteristic game bird of Arizona and New Mexico, of rare beauty, and with habits similar to others of the species of which there are about two hundred. Mr. W. E. D. Scott found the species distributed throughout the entire Catalina region in Arizona below an altitude of 5,000 feet. The bird is also known as the Arizona Quail.

The nest is made in a depression in the ground sometimes without any lining. From eight to sixteen eggs are laid. They are most beautifully marked on a creamy-white ground with scattered spots and blotches of old gold, and sometimes light drab and chestnut red. In some specimens the gold coloring is so pronounced that it strongly suggests to the imagination that this quail feeds upon the grains of the precious metal which characterizes its home, and that the pigment is imparted to the eggs.

After the nesting season these birds commonly gather in “coveys” or bevies, usually composed of the members of but one family. As a rule they are terrestrial, but may take to trees when flushed. They are game birds par excellence, and, says Chapman, trusting to the concealment afforded by their dull colors, attempt to avoid detection by hiding rather than by flying. The flight is rapid and accompanied by a startling whirr, caused by the quick strokes of their small, concave, stiff-feathered wings. They roost on the ground, tail to tail, with heads pointing outward; “a bunch of closely huddled forms—a living bomb whose explosion is scarcely less startling than that of dynamite manufacture.”

The Partridge is on all hands admitted to be wholly harmless, and at times beneficial to the agriculturist. It is an undoubted fact that it thrives with the highest system of cultivation, and the lands that are the most carefully tilled, and bear the greatest quantity of grain and green crops, generally produce the greatest number of Partridges.

Nest—Placed on the ground, sometimes without any lining. 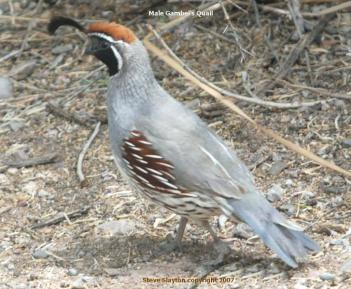 Partridges are mentioned in two verses, thus making it a Bible Bird. Of course, the Gambel’s is not mentioned, only his family. They belong to the Galliformes order and are now called the Gambel’s Quail. They are in the Odontophoridae – New World Quail Family along with 33 other species (3.1 IOC).

Now therefore, let not my blood fall to the earth away from the presence of the LORD, for the king of Israel has come out to seek a single flea like one who hunts a partridge in the mountains. (1 Samuel 26:20 ESV)

Like the partridge that gathers a brood that she did not hatch, so is he who gets riches but not by justice; in the midst of his days they will leave him, and at his end he will be a fool. (Jeremiah 17:11 ESV)

Since they are now known as Quails, that species also appears in Scripture four times. Exodus 16:13, Numbers 11:31-32, and Psalms 105:40 all mention quail as a provision for His people. We were privileged to see the Gambel’s Quail in California in 1999. They are so neat walking around with that top knot bobbing along.

In the evening quail came up and covered the camp, and in the morning dew lay around the camp. (Exodus 16:13 ESV)

Then a wind from the LORD sprang up, and it brought quail from the sea and let them fall beside the camp, about a day’s journey on this side and a day’s journey on the other side, around the camp, and about two cubits above the ground. And the people rose all that day and all night and all the next day, and gathered the quail. Those who gathered least gathered ten homers. And they spread them out for themselves all around the camp. (Numbers 11:31-32 ESV)

They asked, and he brought quail, and gave them bread from heaven in abundance. (Psalms 105:40 ESV)

“The Gambel’s Quail, Callipepla gambelii, is a small ground-dwelling bird in the New World quail family. It inhabits the desert regions of Arizona, California, Colorado, New Mexico, Nevada, Utah, Texas, and Sonora; also New Mexico-border Chihuahua and the Colorado River region of Baja California. The Gambel’s quail is named in honor of William Gambel, a 19th century naturalist and explorer of the Southwestern United States.” (Wikipedia)

Next Article – The Yellow Warbler

The Previous Article – To A Water-Fowl

Gambel’s Quail – All About Birds