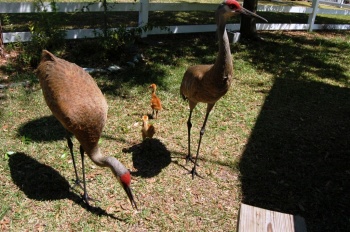 Sandhill Cranes and Babies in yard

Even the stork in the heavens knows her times, and the turtledove, swallow, and crane keep the time of their coming, but my people know not the rules of the LORD. (Jeremiah 8:7 ESV)

Cranes are in the Gruidae Family of the Gruiformes Order. At present there are 15 species or members of that family. All of them are called Cranes, except for one member. That is the Brolga which is found in New Guinea and Australia. Cranes are another of the Lord’s creation that I enjoy watching. We are fortunate to be able to see Sandhill Cranes almost daily. Just spotted 18 today across from my backyard and will post an article about it soon.

Cranes bear a general resemblance to Herons in that they are long-legged, long-necked birds, but when on the wing, they carry the neck fully extended, a habit which will readily distinguish them from the curved neck Herons. Cranes are less aquatic than Herons and are often found feeding on the prairies or pine-barrens where worms, grasshoppers, lizards, roots, etc., form their fare. They nest on the ground laying two buffy eggs thickly marked with brown. The young, unlike the nearly naked, helpless young of Herons, are born covered with down and can soon follow their parents. The Cranes have loud sonorous voices; the Herons raucous croaks.

They have the hind-toe elevated, that is, leaving the foot at a higher level than the front toes; tail short; legs usually long. All fly with the neck extended, a fact by which Cranes in flight may be known from Herons. (Color Key to North American Birds, by Frank M. Chapman)

Cranes are a Bible Bird and appear in two verses, the one above (Jeremiah 8:7) and in the following verse:

A Sandhill Crane call. Does it sound like a chatter?

Cranes construct platform nests in shallow water, and typically lay two eggs at a time. Both parents help to rear the young, which remain with them until the next breeding season.

Cranes migrate (travel to a warmer climate in winter) as mention in Jeremiah 8:7. Here is a photo of Common Cranes in Israel gathered together.

Common Cranes in Israel. Many species of crane gather in large groups during migration and on their wintering grounds ©WikiC

Cranes are one of the tallest flying birds, but more on that in another Bible Birds article.