It came about at noon, that Elijah mocked them and said, “Call out with a loud voice, for he is a god; either he is occupied or gone aside, or is on a journey, or perhaps he is asleep and needs to be awakened.” (1 Kings 18:27 NASB)

Here is an introduction to another of the Lord’s neat creations. This one can be quite noisy at times. Not sure if that qualifies as a “joyful noise.” We have seen them at the Jacksonville Zoo and the Cincinnati Zoo.

Based on DNA analysis they are probably most closely related to the Australian magpie goose. (National Zoo)

The southern screamer is a good swimmer, having partially webbed feet, but prefers to move on the ground. The bony spurs on its wings are used for protection against rival screamers and other enemies. Although it is non-migratory, it is an excellent flier. It lives in large flocks, feeding on the ground in grasslands and cultivated fields until nesting season, when birds pair off. 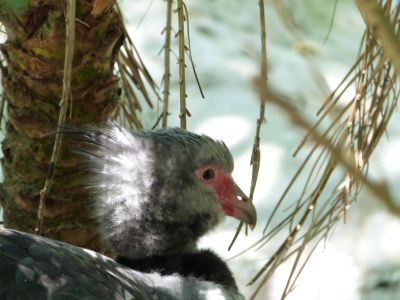 The southern screamer establishes monogamous relationships that last its lifetime, estimated to be 15 years. Courtship involves loud calling by both sexes, which can be heard up to two miles away. “Highly vocal, they are named for their distinctive , far-carrying calls, easily carrying for several miles.”(NZ) The Southern Screamer is the most gregarious of the 3 screamer species and the most numerous. For the nest the couple makes a big platform of reeds, straws, and other aquatic plants in an inaccessible place near water. The female lays between two and seven white eggs. The couple share incubation, which takes 43 to 46 days. Chicks leave the nest as soon as they hatch, but the parents care for them for several weeks. The fledging period takes 8 to 14 weeks. (Wikipedia and other internet sources)

Here is a Southern Screamer from xeno-canto: