“It was such a hot day yesterday,” said daddy, “that Mr. Plain Sparrow simply could not get cool. You see he never goes away in the winter and so he gets used to really cold weather. On a day as hot as it was yesterday he simply doesn’t know what to do with himself. He called himself Mr. Plain Sparrow because that was exactly what he was. He was just a plain, ordinary sparrow, and he thought it such a wise thing to call himself that—and not put on any silly frills. He prided himself on being sensible.

“‘I think,’ he said, ‘that I will take a walk or a fly to the duck pond in the park nearby. Yes, it seems to me that’s an excellent scheme. I would like to see those ducks, for they’re right smart creatures, and I like to hear their funny quack-quack talk.’

“‘What are you up to, ducks?’ he called, as he flew over the pond, and then perched on a small bush that was at one side.

“‘We’re well,’ said the ducks. ‘We’re enjoying a cooling drink between swims. Would you like to join us? It’s just tea time.’

“‘Tea time, eh?’ said Mr. Plain Sparrow. ‘And would you give a fellow a good, fat worm in place of bread and butter and cake?’

“‘Quack-quack! ha, ha!’ laughed the ducks. ‘We don’t like bread and butter and cake. But we can’t get the worm for you just now, as we’re not very good at digging on such a hot day!’

“‘Well, then, how about my digging for a couple of them, and then joining all you nice ducks when you’re ready to have your tea?’

“‘Splendid idea,’ quacked the ducks. And off went Mr. Plain Sparrow to a soft place in the earth where he thought there would be some good worms.

“Pretty soon he came back with some fine ones, and he sat on his perch and ate them, while the ducks nibbled at their food, and had drinks of pond water, which they called tea. Mr. Plain Sparrow flew down and took sips of water by the side of the pond, and in one very shallow place he had some nice showerbaths while the ducks were having swims. And before he left he told the ducks what a good time he had had, and how nice and cool he felt.

“‘Well, you’re so friendly we’re glad you came,’ quacked the ducks once again.” 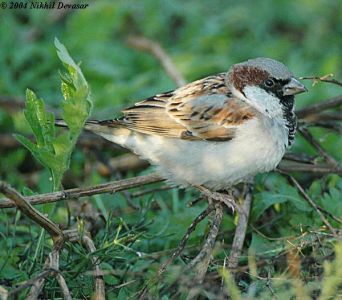 A man who has friends must himself be friendly, But there is a friend who sticks closer than a brother. (Proverbs 18:24 NKJV)

Here is another Bird Tale to remind us to be friendly. Even though Mr. Plain Sparrow was having a rough day, he still showed himself friendly to others around him. When things don’t go the way we want, do we become unfriendly to those around us? What should we do?

Who is the friend who sticks closer than a brother? See ABC’s of the Gospel