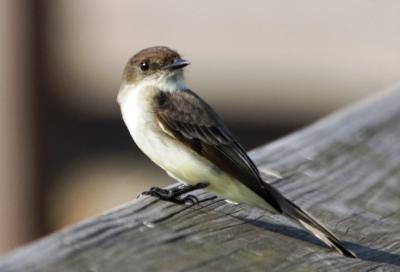 An Old Friend In a New Home

The Phoebe and the Least Flycatcher

CHAPTER 6. An Old Friend In a New Home.

Every day brought newcomers to the Old Orchard, and early in the morning there were so many voices to be heard that perhaps it is no wonder if for some time Peter Rabbit failed to miss that of one of his very good friends. Most unexpectedly he was reminded of this as very early one morning he scampered, lipperty-lipperty-lip, across a little bridge over the Laughing Brook.

“Dear me! Dear me! Dear me!” cried rather a plaintive voice. Peter stopped so suddenly that he all but fell heels over head. Sitting on the top of a tall, dead, mullein stalk was a very soberly dressed but rather trim little fellow, a very little larger than Bully the English Sparrow. Above, his coat was of a dull olive-brown, while underneath he was of a grayish-white, with faint tinges of yellow in places. His head was dark, and his bill black. The feathers on his head were lifted just enough to make the tiniest kind of crest. His wings and tail were dusky, little bars of white showing very faintly on his wings, while the outer edges of his tail were distinctly white. He sat with his tail hanging straight down, as if he hadn’t strength enough to hold it up.

“Hello, Dear Me!” cried Peter joyously. “What are you doing way down here? I haven’t seen you since you first arrived, just after Winsome Bluebird got here.” Peter started to say that he had wondered what had become of Dear Me, but checked himself, for Peter is very honest and he realized now that in the excitement of greeting so many friends he hadn’t missed Dear Me at all.

Dear Me the Phoebe did not reply at once, but darted out into the air, and Peter heard a sharp click of that little black bill. Making a short circle, Dear Me alighted on the mullein stalk again.

“Did you catch a fly then?” asked Peter.

“Dear me! Dear me! Of course I did,” was the prompt reply. And with each word there was a jerk of that long hanging tail. Peter almost wondered if in some way Dear Me’s tongue and tail were connected. “I suppose,” said he, “that it is the habit of catching flies and bugs in the air that has given your family the name of Flycatchers.”

Dear Me nodded and almost at once started into the air again. Once more Peter heard the click of that little black bill, then Dear Me was back on his perch. Peter asked again what he was doing down there.

“Mrs. Phoebe and I are living down here,” replied Dear Me. “We’ve made our home down here and we like it very much.”

Peter looked all around, this way, that way, every way, with the funniest expression on his face. He didn’t see anything of Mrs. Phoebe and he didn’t see any place in which he could imagine Mr. and Mrs. Phoebe building a nest. “What are you looking for?” asked Dear Me.

“For Mrs. Phoebe and your home,” declared Peter quite frankly. “I didn’t suppose you and Mrs. Phoebe ever built a nest on the ground, and I don’t see any other place around here for one.”

Dear Me chuckled. “I wouldn’t tell any one but you, Peter,” said he, “but I’ve known you so long that I’m going to let you into a little secret. Mrs. Phoebe and our home are under the very bridge you are sitting on.”

“I don’t believe it!” cried Peter.

But Dear Me knew from the way Peter said it that he really didn’t mean that. “Look and see for yourself,” said Dear Me.

So Peter lay flat on his stomach and tried to stretch his head over the edge of the bridge so as to see under it. But his neck wasn’t long enough, or else he was afraid to lean over as far as he might have. Finally he gave up and at Mr. Phoebe’s suggestion crept down the bank to the very edge of the Laughing Brook. Dear Me darted out to catch another fly, then flew right in under the bridge and alighted on a little ledge of stone just beneath the floor. There, sure enough, was a nest, and Peter could see Mrs. Phoebe’s bill and the top of her head above the edge of it. It was a nest with a foundation of mud covered with moss and lined with feathers.

“That’s perfectly splendid!” cried Peter, as Dear Me resumed his perch on the old mullein stalk. “How did you ever come to think of such a place? And why did you leave the shed up at Farmer Brown’s where you have build your home for the last two or three years?”

“Oh,” replied Dear Me, “we Phoebes always have been fond of building under bridges. You see a place like this is quite safe. Then, too, we like to be near water. Always there are many insects flying around where there is water, so it is an easy matter to get plenty to eat. I left the shed at Farmer Brown’s because that pesky cat up there discovered our nest last year, and we had a dreadful time keeping our babies out of her clutches. She hasn’t found us down here, and she wouldn’t be able to trouble us if she should find us.”

“I suppose,” said Peter, “that as usual you were the first of your family to arrive.”

“Certainly. Of course,” replied Dear Me. “We always are the first. Mrs. Phoebe and I don’t go as far south in winter as the other members of the family do. They go clear down into the Tropics, but we manage to pick up a pretty good living without going as far as that. So we get back here before the rest of them, and usually have begun housekeeping by the time they arrive. My cousin, Chebec the Least Flycatcher, should be here by this time. Haven’t you heard anything of him up in the Old Orchard?”

“No,” replied Peter, “but to tell the truth I haven’t looked for him. I’m on my way to the Old Orchard now, and I certainly shall keep my ears and eyes open for Chebec. I’ll tell you if I find him. Good-by.”

“Dear me! Dear me! Good-by Peter. Dear me!” replied Mr. Phoebe as Peter started off for the Old Orchard.

Perhaps it was because Peter was thinking of him that almost the first voice he heard when he reached the Old Orchard was that of Chebec, repeating his own name over and over as if he loved the sound of it. It didn’t take Peter long to find him. He was sitting out on the up of one of the upper branches of an apple-tree where he could watch for flies and other winged insects. He looked so much like Mr. Phoebe, save that he was smaller, that any one would have know they were cousins. “Chebec! Chebec! Chebec!” he repeated over and over, and with every note jerked his tail. Now and then he would dart out into the air and snap up something so small that Peter, looking up from the ground, couldn’t see it at all.

“Hello, Chebec!” cried Peter. “I’m glad to see you back again. Are you going to build in the Old Orchard this year?”

“Of course I am,” replied Chebec promptly. “Mrs. Chebec and I have built here for the last two or three years, and we wouldn’t think of going anywhere else. Mrs. Chebec is looking for a place now. I suppose I ought to be helping her, but I learned a long time ago, Peter Rabbit, that in matters of this kind it is just as well not to have any opinion at all. When Mrs. Chebec has picked out just the place she wants, I’ll help her build the nest. It certainly is good to be back here in the Old Orchard and planning a home once more. We’ve made a terribly long journey, and I for one am glad it’s over.”

“I just saw your cousins, Mr. and Mrs. Phoebe, and they already have a nest and eggs,” said Peter.

“The Phoebes are a funny lot,” replied Chebec. “They are the only members of the family that can stand cold weather. What pleasure they get out of it I don’t understand. They are queer anyway, for they never build their nests in trees as the rest of us do.”

“Are you the smallest in the family?” asked Peter, for it had suddenly struck him that Chebec was a very little fellow indeed.

Chebec nodded. “I’m the smallest,” said he. “That’s why they call me Least Flycatcher. I may be least in size, but I can tell you one thing, Peter Rabbit, and that is that I can catch just as many bugs and flies as any of them.” Suiting action to the word, he darted out into the air. His little bill snapped and with a quick turn he was back on his former perch, jerking his tail and uttering his sharp little cry of, “Chebec! Chebec! Chebec!” until Peter began to wonder which he was the most fond of, catching flies, or the sound of his own voice.

Presently they both heard Mrs. Chebec calling from somewhere in the middle of the Old Orchard. “Excuse me, Peter,” said Chebec, “I must go at once. Mrs. Chebec says she has found just the place for our nest, and now we’ve got a busy time ahead of us. We are very particular how we build a nest.”

“Do you start it with mud the way Welcome Robin and your cousins, the Phoebes, do?” asked Peter.

“Mud!” cried Chebec scornfully. “Mud! I should say not! I would have you understand, Peter, that we are very particular about what we use in our nest. We use only the finest of rootlets, strips of soft bark, fibers of plants, the brown cotton that grows on ferns, and perhaps a little hair when we can find it. We make a dainty nest, if I do say it, and we fasten it securely in the fork made by two or three upright little branches. Now I must go because Mrs. Chebec is getting impatient. Come see me when I’m not so busy Peter.”

The family that the Phoebe and the Least Flycatcher belong to is the Tyrant Flycatchers – Tyrannidae Family. It is a very large family, but most do not live here in North America.

How does the story describe Dear Me the Phoebe?

The Least Flycatcher is called Chebec. Do you know why?

The birds of the air have their resting-places by them (trees), and make their song among the branches. (Psalms 104:12 BBE)

Next Chapter (The Watchman of the Old Orchard.)