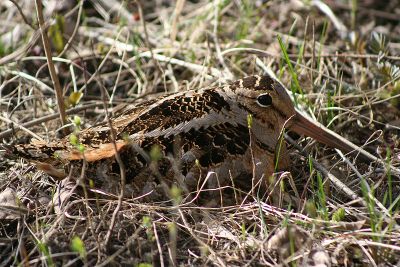 The Woodcock and the Spotted Sandpiper.

From the decided way in which Jenny Wren had popped into the little round doorway of her home, Peter knew that to wait in the hope of more gossip with her would be a waste of time. He wasn’t ready to go back home to the dear Old Briar-patch, yet there seemed nothing else to do, for everybody in the Old Orchard was too busy for idle gossip. Peter scratched a long ear with a long hind foot, trying to think of some place to go. Just then he heard the clear “peep, peep, peep” of the Hylas, the sweet singers of the Smiling Pool.

“That’s where I’ll go!” exclaimed Peter. “I haven’t been to the Smiling Pool for some time. I’ll just run over and pay my respects to Grandfather Frog, and to Redwing the Blackbird. Redwing was one of the first birds to arrive, and I’ve neglected him shamefully.”

When Peter thinks of something to do he wastes no time. Off he started, lipperty-lipperty-lip, for the Smiling Pool. He kept close to the edge of the Green Forest until he reached the place where the Laughing Brook comes out of the Green Forest on its way to the Smiling Pool in the Green Meadows. Bushes and young trees grow along the banks of the Laughing Brook at this point. The ground was soft in places, quite muddy. Peter doesn’t mind getting his feet damp, so he hopped along carelessly. From right under his very nose something shot up into the air with a whistling sound. It startled Peter so that he stopped short with his eyes popping out of his head. He had just a glimpse of a brown form disappearing over the tops of some tall bushes. Then Peter chuckled. “I declare,” said he, “I had forgotten all about my old friend, Longbill the Woodcock. He scared me for a second.”

“Then you are even,” said a voice close at hand. “You scared him. I saw you coming, but Longbill didn’t.”

Peter turned quickly. There was Mrs. Woodcock peeping at him from behind a tussock of grass.

“Not too scared to come back, anyway,” said Longbill himself, dropping down just in front of Peter. “I recognized you just as I was disappearing over the tops of the bushes, so I came right back. I learned when I was very young that when startled it is best to fly first and find out afterwards whether or not there is real danger. I am glad it is no one but you, Peter, for I was having a splendid meal here, and I should have hated to leave it. You’ll excuse me while I go on eating, I hope. We can talk between bites.”

“Certainly I’ll excuse you,” replied Peter, staring around very hard to see what it could be Longbill was making such a good meal of. But Peter couldn’t see a thing that looked good to eat. There wasn’t even a bug or a worm crawling on the ground. Longbill took two or three steps in rather a stately fashion. Peter had to hide a smile, for Longbill had such an air of importance, yet at the same time was such an odd looking fellow. He was quite a little bigger than Welcome Robin, his tail was short, his legs were short, and his neck was short. But his bill was long enough to make up. His back was a mixture of gray, brown, black and buff, while his breast and under parts were a beautiful reddish-buff. It was his head that made him look queer. His eyes were very big and they were set so far back that Peter wondered if it wasn’t easier for him to look behind him than in front of him.

“Not at all,” replied Longbill. “Mrs. Woodcock made some of them.”

“And was there a worm in every one?” asked Peter, his eyes very wide with interest.

Longbill nodded. “Of course,” said he. “You don’t suppose we would take the trouble to bore one of them if we didn’t know that we would get a worm at the end of it, do you?”

Peter remembered how he had watched Welcome Robin listen and then suddenly plunge his bill into the ground and pull out a worm. But the worms Welcome Robin got were always close to the surface, while these worms were so deep in the earth that Peter couldn’t understand how it was possible for any one to know that they were there. Welcome Robin could see when he got hold of a worm, but Longbill couldn’t. “Even if you know there is a worm down there in the ground, how do you know when you’ve reached him? And how is it possible for you to open your bill down there to take him in?” asked Peter.

Longbill chuckled. “That’s easy,” said he. “I’ve got the handiest bill that ever was. See here!” Longbill suddenly thrust his bill straight out in front of him and to Peter’s astonishment he lifted the end of the upper half without opening the rest of his bill at all. “That’s the way I get them,” said he. “I can feel them when I reach them, and then I just open the top of my bill and grab them. I think there is one right under my feet now; watch me get him.” Longbill bored into the ground until his head was almost against it. When he pulled his bill out, sure enough, there was a worm. “Of course,” explained Longbill, “it is only in soft ground that I can do this. That is why I have to fly away south as soon as the ground freezes at all.”

“It’s wonderful,” sighed Peter. “I don’t suppose any one else can find hidden worms that way.”

“My cousin, Jack Snipe, can,” replied Longbill promptly. “He feeds the same way I do, only he likes marshy meadows instead of brushy swamps. Perhaps you know him.”

WWilson’s Snipe (Gallinago delicata) at Circle B by Dan

Peter nodded. “I do,” said he. “Now you speak of it, there is a strong family resemblance, although I hadn’t thought of him as a relative of yours before. Now I must be running along. I’m ever so glad to have seen you, and I’m coming over to call again the first chance I get.”

So Peter said good-by and kept on down the Laughing Brook to the Smiling Pool. Right where the Laughing Brook entered the Smiling Pool there was a little pebbly beach. Running along the very edge of the water was a slim, trim little bird with fairly long legs, a long slender bill, brownish-gray back with black spots and markings, and a white waistcoat neatly spotted with black. Every few steps he would stop to pick up something, then stand for a second bobbing up and down in the funniest way, as if his body was so nicely balanced on his legs that it teetered back and forth like a seesaw. It was Teeter the Spotted Sandpiper, an old friend of Peter’s. Peter greeted him joyously.

“Peet-weet! Peet-weet!” cried Teeter, turning towards Peter and bobbing and bowing as only Teeter can. Before Peter could say another word Teeter came running towards him, and it was plain to see that Teeter was very anxious about something. “Don’t move, Peter Rabbit! Don’t move!” he cried.

“Why not?” demanded Peter, for he could see no danger and could think of no reason why he shouldn’t move. Just then Mrs. Teeter came hurrying up and squatted down in the sand right in front of Peter.

“Thank goodness!” exclaimed Teeter, still bobbing and bowing. “If you had taken another step, Peter Rabbit, you would have stepped right on our eggs. You gave me a dreadful start.”

Peter was puzzled. He showed it as he stared down at Mrs. Teeter just in front of him. “I don’t see any nest or eggs or anything,” said he rather testily.

Mrs. Teeter stood up and stepped aside. Then Peter saw right in a little hollow in the sand, with just a few bits of grass for a lining, four white eggs with big dark blotches on them. They looked so much like the surrounding pebbles that he never would have seen them in the world but for Mrs. Teeter. Peter hastily backed away a few steps. Mrs. Teeter slipped back on the eggs and settled herself comfortably. It suddenly struck Peter that if he hadn’t seen her do it, he wouldn’t have known she was there. You see she looked so much like her surroundings that he never would have noticed her at all.

“My!” he exclaimed. “I certainly would have stepped on those eggs if you hadn’t warned me,” said he. “I’m so thankful I didn’t. I don’t see how you dare lay them in the open like this.”

Mrs. Teeter chuckled softly. “It’s the safest place in the world, Peter,” said she. “They look so much like these pebbles around here that no one sees them. The only time they are in danger is when somebody comes along, as you did, and is likely to step on them without seeing them. But that doesn’t happen often.” 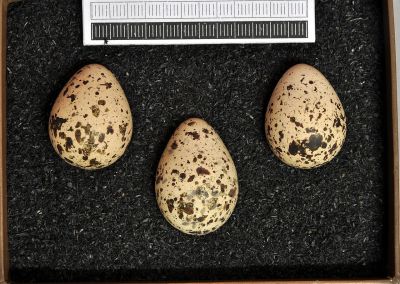 “You shall hide them in the secret place of Your presence From the plots of man; You shall keep them secretly in a pavilion… (Psalms 31:20 NKJV)

These birds all belong to the Scolopacidae – Sandpipers, Snipes Family. There are 96 species in this family.

Next Chapter Redwing and Yellow Wing

3 thoughts on “Longbill and Teeter – Chapter 9”