Before the mountains were brought forth, or ever thou hadst formed the earth and the world, even from everlasting to everlasting, thou art God. (Psalms 90:2 KJV)

Hast thou not known? hast thou not heard, that the everlasting God, the LORD, the Creator of the ends of the earth, fainteth not, neither is weary? there is no searching of his understanding. (Isaiah 40:28 KJV)

Since I have been going down the list of Passerines, might as well keep going. Today’s birds are from Gnateaters (Conopophagidae), Tapaculos (Rhinocryptidae),  Crescentchests (Melanopareiidae) and part of the Tyrant Flycatchers (Tyrannidae). There are over 400 members in the last family, so will add more later.

As you can see, most of these are fairly small birds and rather non-descript. Their Creator has given them a nice look, but has them protected by letting them blend in with their surroundings. Another show of love for His creation. 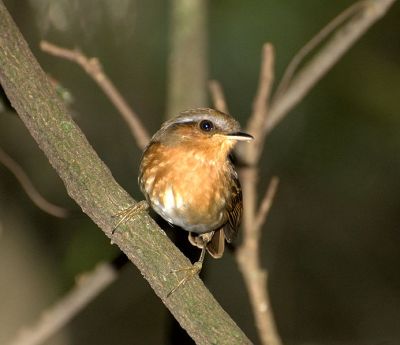 The gnateaters are a bird family, consisting of ten small passerine species in two genera, which occur in South and Central America. The members of this family are very closely related to the antbirds and less closely to the antpittas and tapaculos. Due to their remote and dim habitat, gnateaters are a little-studied and poorly known family of birds. They are round, short-tailed, and long-legged birds, about 12–19 cm (5–7½ inches) in length. They are quite upright when standing. Most Conopophaga species have a white tuft behind the eye.

The tapaculos (pronounced ta-pa-COO-lo) are found mainly in South America and with the highest diversity in the Andean regions. Three species (Chocó, Tacarcuna, and the silvery-fronted) are found in southern Central America. Tapaculos are small to medium-sized birds, with a total length ranging from 10–24 cm (4–9½ in). These are terrestrial species that fly only poorly on their short wings. They have strong legs, well-suited to their habitat of grassland or forest undergrowth. The tail is cocked and pointed towards the head, and the name tapaculo possibly derives from Spanish for “cover your behind”.

The crescentchests are birds from South America. The crescentchests range in length from 14 to 16 cm (5.5–6.3 in), in weight from 16 to 23 g (0.56–0.81 oz) and have relatively long tails compared to the tapaculos. The plumage is striking with a distinctive band across the chest that gives the group their name.

The tyrant flycatchers are birds which occur throughout North and South America. They are considered the largest family of birds, with more than 400 species. They are the most diverse avian family in every country in the Americas, except for the United States and Canada. As could be expected from a family this large, the members vary greatly in shape, patterns, size and colors. Most, but not all, species are rather plain, with various hues of brown, gray and white commonplace. Obvious exceptions include the bright red vermilion flycatcher, blue, black, white and yellow many-colored rush-tyrant and some species of tody-flycatchers or tyrants, which are often yellow, black, white and/or rufous.

The smallest family members are the closely related short-tailed pygmy tyrant and black-capped pygmy tyrant. These species reach a total length of 6.5–7 cm (2.5–2.8 in) and a weight of 4–5 grams. By length, they are the smallest passerines on earth, although some species of Old World warblers apparently rival them in their minuscule mean body masses if not in total length. The minuscule size and very short tail of the Myiornis pygmy tyrants often lend them a resemblance to a tiny ball or insect. The largest tyrant flycatcher is the great shrike-tyrant at 29 cm (11.5 in) and 99.2 grams (3.5 oz).

Now to him that is of power to stablish you according to my gospel, and the preaching of Jesus Christ, according to the revelation of the mystery, which was kept secret since the world began, But now is made manifest, and by the scriptures of the prophets, according to the commandment of the everlasting God, made known to all nations for the obedience of faith: To God only wise, be glory through Jesus Christ for ever. Amen. Written to the Romans from Corinthus, and sent by Phebe servant of the church at Cenchrea. (Romans 16:25-27 KJV)

This was another song presented the day Pastor Jerry Smith retired from our Music Ministry at Faith Baptist Church.