If you read my blog, Impact of the Answers in Genesis Conference, I stated that the Foundation of the Word of God needs to be emphasized. For the last year, the different Birds of the Bible have been introduced. Where did the birds come from? The byline of this blog is “Birdwatching from a Christian Perspective.”  What does God’s Word say about the bird’s Creation?

Most birdwatchers know that when they pick up a Bird Guide or Book, one of the first thing we read is:

“Having attained the power of flight more than 150 million years ago, birds might be …” (Smithsonian Handbooks, Birds of North America, Eastern Region, page 6)

“Feathered Dinosaurs?
For years biologists have half-jokingly referred to birds as “feathered reptiles.” In part, it is a ploy to annoy bird lovers with the thought that the objects of their fancy are just singing lizards wrapped in stretched-out scales called “feathers.” Yet the phrase reflects an important biological reality: birds are undeniably the modified descendants of reptiles, as their body structure and habit of laying eggs out of water clearly show.”
“Archaeopteryx makes an ideal “missing link,” showing characteristics intermediate between reptiles and birds…..One view, still held by many paleontologists, suggests that about 200 million years ago its ancestral line split off from a group of reptiles, the thecodonts.” (The Birder’s Handbook, p. 31-33)

“The Implications of Flight / The central theme of bird evolution is flight. Most avian features can be related back to this fundamental adaptation. The avian forelimbs are dedicated almost entirely to aerial flight, for instance. To meet the diverse demands of survival without hands, birds have been subject to a fascinating evolutionary makeover.”  … “Birds have evolved compact….” (p. 15)  Section called Origins, Evolution, and Classification states – “Bird Are Reptiles – Before the discovery of Archaeopteryx” (“about 150 million years”),” taxonomists had already suggested a close relationship between birds and reptiles because of the large number of anatomical features shared by the two classes of animals.” Goes on to mention “missing link” (p. 39, The Sibley Guide to Bird Life & Behavior)

On and on it goes. They state as “undeniable facts” many things that come from a “theory.”

But the Word of God, our Bible says differently.

In the beginning God created the heaven and the earth. (Genesis 1:1)

Continuing through Chapter 1, you find that God, who is the “self-existent”, “three-in-one”, known as “I AM“, did the creation through the Lord Jesus Christ. 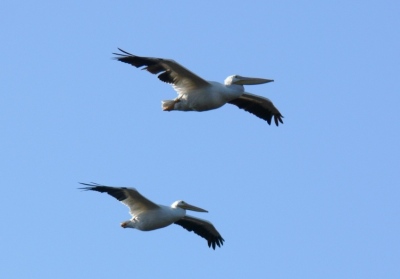 Day 1 – Light (Day) and darkness (Night)
Day 2 – Firmament (Heaven) in midst of the waters and divided them
Day 3 – Waters (Seas) gathered together and the dry land (Earth) appeared with grass, herbs and fruit after his kind
Day 4 – Sun, Moon, and Stars
Day 5 – Great whales and all water creatures after his kind and the winged fowls (birds) after his kind

And God said, Let the waters bring forth abundantly the moving creature that hath life, and fowl that may fly above the earth in the open firmament of heaven. And God created great whales, and every living creature that moveth, which the waters brought forth abundantly, after their kind, and every winged fowl after his kind: and God saw that it was good. And God blessed them, saying, Be fruitful, and multiply, and fill the waters in the seas, and let fowl multiply in the earth. And the evening and the morning were the fifth day. (Genesis 1:20-23)

Day 6 – Land animals, cattle, and creeping things after their kind

So God created man in his own image, in the image of God created he him; male and female created he them. And God blessed them, and God said unto them, Be fruitful, and multiply, and replenish the earth, and subdue it: and have dominion over the fish of the sea, and over the fowl of the air, and over every living thing that moveth upon the earth. And God said, Behold, I have given you every herb bearing seed, which is upon the face of all the earth, and every tree, in the which is the fruit of a tree yielding seed; to you it shall be for meat. (Genesis 1:27-29)

Day 7 – God rested and blessed and sanctified all His work

In Birds of the Bible – Foundation #2, I will bring out some more from the Word of God and articles written about the creation of birds. For now, let me make this observation. If the birds were created on Day 5 and the reptiles were created on Day 6, how did birds evolve from reptiles?

A friend suggested that, since she is a new follower, I should re-post/update some of the original Birds of the Bible articles. This series was posted back in 2009. I am updating some of the photos and material as needed.

Original Birds of the Bible – Foundation #1

Original Birds of the Bible – Foundation #2

3 thoughts on “Birds of the Bible – Foundation #1 – Updated”