Enter into His gates with thanksgiving

1 Make a joyful noise unto the Lord, all ye lands.  2 Serve the Lord with gladness; come before His presence with singing.  3 Know ye that the Lord He is God; it is He Who hath made us, and not we ourselves; we are His people, and the sheep of His pasture.  4 Enter into His gates with thanksgiving, and into His courts with praise; be thankful unto Him, and bless His name.  5 For the Lord is good; His mercy is everlasting; and His truth endureth to all generations.  (Psalm 100) 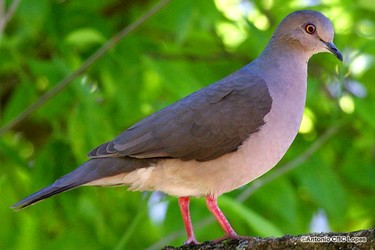 Grenada’s official coat of arms includes an Armadillo and a Grenada Dove (Leptotila wells  —  a/k/a Well’s dove or pea dove), positioned above the motto “Ever conscious of God, we aspire, build, and advance as one people.”   The Grenada Dove is endemic to Grenada – i.e., only on the island of Grenada is the Grenada Dove found in the wild, and even there it is critically “endangered” (i.e., close to extinction).   The dove’s coloring, as depicted on the Grenada coat of arms, however, does not closely match the actual coloring of the real bird. 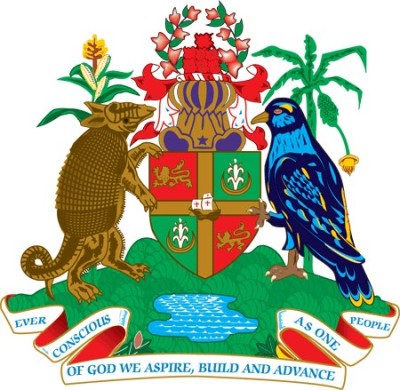 The dove’s coloring, as depicted on the Grenada coat of arms, however, does not closely match the actual coloring of the real bird.  The actual Grenada Dove has little blue to it (depending on the lighting used to view it)  –  rather, brown and buff dominate its overall coloring.  One wonders why, therefore, the heraldic depiction shows indigo-blue and azure, with yellow highlighting.  Consider the more realistic depictions before, as shown by photographic and postage images. 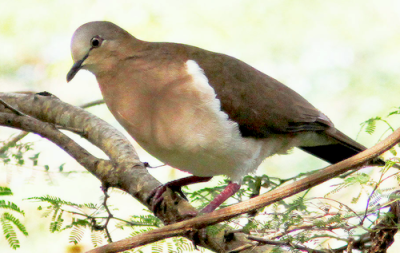 https://grenadanationalarchives.wordpress.com/tag/leptotila-wellis/ (from the website of the National Archives of Grenada) 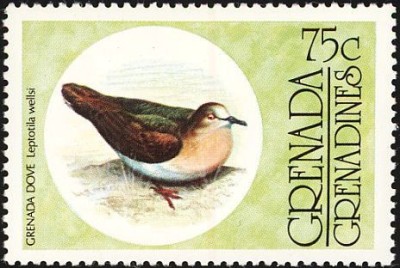 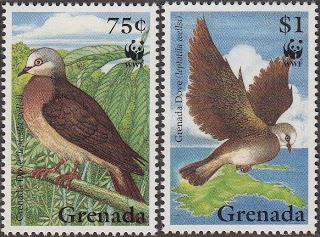 The lesson here, apparently, is that heraldic coat-of-arms depictions of birds can (sometimes) be quite unrealistic – or else the artist might be depicting the wrong bird!

But Grenada’s coat of arms is not the only surprise in its national symbols.

In the United States of America, for a contrasting example, the holiday of “Thanksgiving” (celebrated on the fourth Thursday in November) commemorates the gratitude of Plymouth Pilgrims, as pioneer survivors, who thanked God at harvest time in AD1621, for His providence — see “Strangers and Pilgrims (and the American Turkey)”, posted at https://leesbird.com/2014/11/25/strangers-and-pilgrims/ .  The Pilgrims’ survival and early successes, due to God’s providence, are also celebrated in the Netherlands, in Leiden, to commemorate how the Pilgrims lived in Holland during AD1609-AD1620.  A special Thanksgiving worship service is conducted, there, on the morning of America’s Thanksgiving, in Pieterskerk [“Peter’s church”], a Gothic church that was originally Roman Catholic (from its architectural beginning in AD1390), yet became Protestant during the Dutch Reformation, and became the burial site for John Robinson, pastor of the Pilgrims prior to their migratory journey to America.

Saint Lucia, an island nation on the eastern edge of the Caribbean Sea, celebrates Thanksgiving on the first Monday in October.

Christians in Germany have a similar harvest-thanksgiving holiday, Erntedankfest, in early October, at about the same time that its Bavarians are celebrating Oktoberfest.

Thanksgiving is supposed to be focused on thanking God —  even the name of the holiday suggests as much.  However, although gratitude to God  –-  for harvest blessings  —  was the original reason for most harvest festival-oriented “thanksgiving” holidays, many Thanksgiving traditions have forgotten the historic importance of thanking God for His caring providences, by focusing more on distractive parades (e.g., Macy’s, IKEA’s, McDonald’s), football games, and feasting  —  with such festive celebrations discounted in slang as “Turkey Day”. (British Laird Bill Cooper was quite disappointed to learn of this trivialized secularization of what was originally a holy day/holiday.)

But how is Thanksgiving celebrated in Grenada, and why ?

First, consider where Grenada is located – Grenada is an island nation situated slightly east of South America, north of Venezuela.  Politically speaking, the nation of Grenada actually includes the main island (called “Grenada”) plus a few smaller islands, some but not all of “the Grenadines”, which are situated north of the Martinique Channel – with several of the other Grenadine islands (located south of the Martinique Channel) jurisdictionally belonging to the Caribbean nation called “St. Vincent and the Grenadines”. 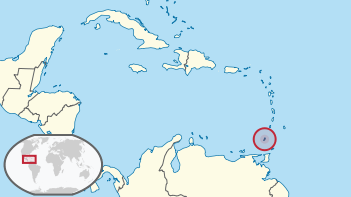 In AD1498 the main island of Grenada was visited by Christopher Columbus, who named it “Concepcion”.

Grenada was later visited by Britons, then French; it was eventually settled by French colonists. Later, as part of the Treaty of Paris (in AD1763), Grenada became a British colony.  Grenada shed its colonial status, however, in AD1974, as it then became officially independent of the United Kingdom, although it remained an affiliate of the British Commonwealth.

So far so good, it seemed, until AD1983, when a Communist military takeover occurred on the island, led by General Hudson Austin (who was politically backed by Cuba, and aided by Cuban soldiers), actually seized control from a prior Communist takeover (i.e., one Communist regime killed off the leadership of a prior Communist dictatorship).  American students were put in jeopardy so President Ronald Reagan authorized a military rescue operation, which included defeating the “New Jewel Movement” (i.e., the second Communist dictatorship).

Thus, beginning on October 25th of AD1983, the “New Jewel Movement” Communists, who had seized the country, were soon opposed by a coalition of rescue forces, comprised of the United States and several Caribbean allies (from six Caribbean nations, including Jamaica and Barbados), in a complicated military effort called “Operation Urgent Fury” – which included U.S. Army Rangers, U.S. Marines, Delta Force, 82nd Airborne paratroopers, and U.S. Navy SEALs.  Because the rescue operation was so successful – and peace was restored to Grenada (with the Cuban soldiers being expelled) a holiday of gratitude was established – October 25th became Thanksgiving Day for Grenada.

Bottom line:   we all  –  whether Americans or Grenadians or anyone else for whom Christ died  —  have a lot to be thankful for, on whatever day that we celebrate Thanksgiving (and on every other day of the year!).

In accord with Psalm 100 we should, daily, “enter into His gates with thanksgiving, and into His courts with praise; be thankful unto Him, and bless His name”.

2 thoughts on “Enter Into His Gates With Thanksgiving”