“With him is wisdom and strength, he hath counsel and understanding.” (Job 12:13 KJV)

It’s Sunday and time for some more of the Anatidae Family. We have 18 more great swimmers for you to check out. These are in 10 different genera, with 9 Ducks, 9 Geese and 2 sheldgeese. The Lord created all of these with shapes and colors, but they all love being in or near water.

Freckled Duck (Stictonetta naevosa) – is a waterfowl species endemic to Australia and is among the rarest waterfowl in the world. The freckled duck has also been referred to as the monkey duck or the oatmeal duck in English, Punktchenente in German, canard mouchete in French and pato manchado in Spanish. These birds are usually present in mainland Australia, but disperse to coastal and subcostal wetlands in the dry period. During such times it is common for the freckled duck population to congregate in flocks in the same area, giving the impression that they are more common than they really are.

The freckled duck has a distinctive appearance. It is characterized, in adults, by dark grey to black plumage covered with small white flecks, which gives the duck the ‘freckled’ look. The feet, legs and bill of both sexes is of a slate grey color. Hatchlings and juveniles are distinguished by a uniform light grey plumage, which they lose around their 32nd week when they undergo a full body molt to assume the adult plumage.

In the past few decades, several institutions have established breeding programs to aid in supplementation of the freckled duck population. and Zoo Miami is one of the ones in this program. We saw these on our latest trip to the zoo. 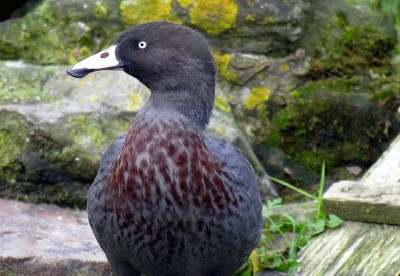 Blue Duck (Hymenolaimus malacorhynchos) is endemic to New Zealand. (Also known as “Whio”) It is the only member of the genus Hymenolaimus. It is an endemic resident breeder in New Zealand, nesting in hollow logs, small caves and other sheltered spots. It is a rare duck, holding territories on fast flowing mountain rivers. It is a powerful swimmer even in strong currents, but is reluctant to fly. It is difficult to find, but not particularly wary when located.

Captive North Island Whio are held and bred on both main islands of New Zealand, but the progeny are returned to their respective island. South Island whio are held and bred in captivity on the South Island only. All captives are kept by approved and permitted zoological and wildlife facilities as part of the national recovery plan. As part of this current ten-year plan (2009-2019) is the WHIONE program which works with specially trained nose dogs to locate nests. The eggs removed and ducklings hatched and raised in captivity. Later they are conditioned for coordinated release. Sounds like they are continuing the Genesis mandate. (Genesis 1:26-28)  * The blue duck is depicted on the reverse side of the New Zealand $10 banknote.

The Steamer Ducks are a genus (Tachyeres) of ducks in the family Anatidae. All of the four species occur at the southern cone of South America in Chile and Argentina, and all except the Flying Steamer Duck are flightless; even this one species capable of flight rarely takes to the air. The genus name Tachyeres, “having fast oars” or “fast rower”, comes from Ancient Greek ταχυ- “fast” + ἐρέσσω “I row (as with oars)”. The common name “steamer ducks” arose because, when swimming fast, they flap their wings into the water as well as using their feet, creating an effect like a paddle steamer. They can be aggressive and are capable of chasing off predators like petrels.

Torrent Duck (Merganetta armata) is the only member of the genus Merganetta. Its closest relative may be the blue duck of New Zealand.
This 43–46-centimetre (17–18 in) long species is a resident breeder in the Andes of South America, nesting in small waterside caves and other sheltered spots. Like the blue duck, it holds territories on fast flowing mountain rivers, usually above 1,500 metres (4,900 ft). It is a powerful swimmer and diver even in white water, but is reluctant to fly more than short distances. It is not particularly wary when located.
Male torrent ducks have a striking black and white head and neck pattern and a red bill. In flight they show dark wings with a green speculum. Females of all subspecies are somewhat smaller than the drakes; they have orange underparts and throat, with the head and upperparts grey and a yellower bill. Juveniles are pale grey above and whitish below. 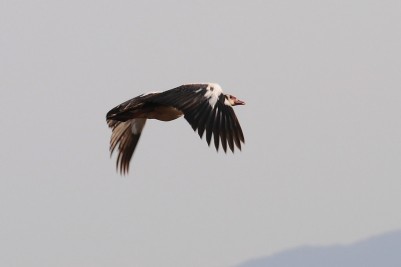 Spur-winged Goose (Plectropterus gambensis) is a large bird in the family Anatidae, related to the geese and the shelducks, but distinct from both of these in a number of anatomical features, and therefore treated in its own subfamily, the Plectropterinae. It occurs in wetlands throughout sub-Saharan Africa. Adults are 75–115 cm (30–45 in) long and weigh on average 4–6.8 kg (8.8–15.0 lb), rarely up to 10 kg (22 lb), with males noticeably larger than the females. The wingspan can range from 150 to 200 cm (59 to 79 in).

This species often occurs in open grasslands with lakes, seasonal pools, rivers, swamps and river deltas. Large inland rivers and lakes are perhaps most commonly inhabited, with saline lakes and upland areas generally being avoided, although the species can occur to an elevation of 3,000 m (9,800 ft) in eastern Africa. It is also absent from arid zones.

Comb Duck (Sarkidiornis sylvicola) and Knob-billed Duck (Sarkidiornis melanotos) are an unusual, pan-tropical duck, found in tropical wetlands in sub-Saharan Africa, Madagascar and south Asia from Pakistan to Laos and extreme southern China. It also occurs in continental South America south to the Paraguay River region in eastern Paraguay, southeastern Brazil and the extreme northeast of Argentina, and as a vagrant on Trinidad. These were subspecies that have both been raise to full species status.

These common species are unmistakable. One of the largest species of duck. Length can range from 56 to 76 cm (22 to 30 in), wingspan ranges from 116 to 145 cm (46 to 57 in) and weight from 1.03 to 2.9 kg (2.3 to 6.4 lb). Adults have a white head freckled with dark spots, and a pure white neck and underparts. The upperparts are glossy blue-black upperparts, with bluish and greenish iridescence especially prominent on the secondaries (lower arm feathers). The male is much larger than the female, and has a large black knob on the bill. Young birds are dull buff below and on the face and neck, with dull brown upperparts, top of the head and eyestripe. 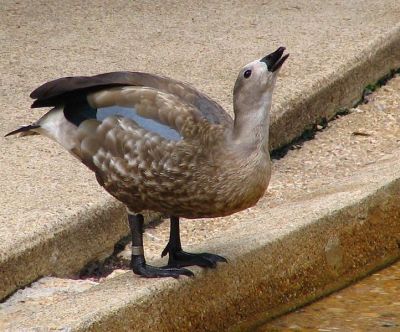 Blue-winged Goose (Cyanochen cyanoptera)  is a waterfowl species which is endemic to Ethiopia. It is the only member of the genus Cyanochen. This is a stocky grey-brown bird about 70 centimetres (28 in) long with a slightly paler head and upper neck. It has a small black bill and black legs. In flight, this species shows a pale blue forewing. Sexes are similar, but immature birds are duller. The plumage of these birds is thick and loose, furlike as an adaptation to the cold of the Ethiopian highlands.

It feeds by grazing, and is apparently largely nocturnal, loafing during the day. It can swim and fly well, but this terrestrial bird is reluctant to do either, and is quite approachable. It forms flocks outside the breeding season. It breeds by mountain lakes and streams. This little-known species is believed to build a lined nest amongst grass tussocks, and to lay 6–7 eggs.

Egyptian geese were considered sacred by the Ancient Egyptians, and appeared in much of their artwork. They have been raised for food and extensively bred in parts of Africa since they were domesticated by the ancient Egyptians. Because of their popularity chiefly as ornamental bird, escapes are common and small feral populations have become established in Western Europe.

Orinoco Goose (Neochen jubata) are 61 to 76 cm (24 to 30 in) long and are resident breeders in the forests of tropical South America. Its preference is forest lakes or marshes with access to open woodland or savanna. This is a largely terrestrial species, which will also perch readily in trees. It rarely swims or flies unless hard pressed. In flight it looks heavy, more like a goose than a duck, hence the English name.

It has a pale head and neck, chestnut flanks and mantle and blackish wings with a white speculum. The legs are red and the bill is black and pinkish. The sexes of this striking species are identical in plumage, though the males are larger; juveniles have duller plumage than adults.

“Sheldgoose, any of the larger members of the duck tribe Tadornini, family Anatidae (order Anseriformes). The smaller members of the tribe are called shelducks. Sheldgeese inhabit tropical and subtropical regions worldwide. They are small-billed and rather long-legged, with upright stance; some have bony spurs—which function as weapons—at the wing bend. Typically they show white wing patches and are finely black-barred below. They are not true geese, though they resemble them in some anatomic features.” Encyclopaedia Britannica

(Information from Wikipedia with editing)

“In a moment, in the twinkling of an eye, at the last trump: for the trumpet shall sound, and the dead shall be raised incorruptible, and we shall be changed.” (1Co 15:52 KJV)

“I Will Rise” ~ Margaret and Sue, accompanied by Amy – cello and Jill – Keyboard