“He turns a wilderness into pools of water, And dry land into watersprings. There He makes the hungry dwell,…” (Psalms 107:35-36a NKJV)

Today we will continue through the Anatidae family of Ducks, Geese, Swans and allies. We start off with these neat Marbled Ducks that greet us when we visit the Parakeet Plus Aviary at Lowry Park Zoo in Tampa, FL.

“The marbled duck, or marbled teal (Marmaronetta angustirostris), is a medium-sized duck. It used to be included among the dabbling ducks, but is now classed as a diving duck. The scientific name, Marmaronetta angustirostris, comes from the Greek marmaros, marbled and netta, a duck, and Latin angustus, narrow or small and rostris billed.The marbled duck is approximately 39–42 cm (15–17 in) long. Adults are a pale sandy-brown colour, diffusely blotched off-white, with a dark eye-patch and shaggy head. Juveniles are similar but with more off-white blotches. In flight, the wings look pale without a marked pattern, and no speculum on the secondaries. These birds feed mainly in shallow water by dabbling or up-ending, occasionally diving. Little is known of their diet.” 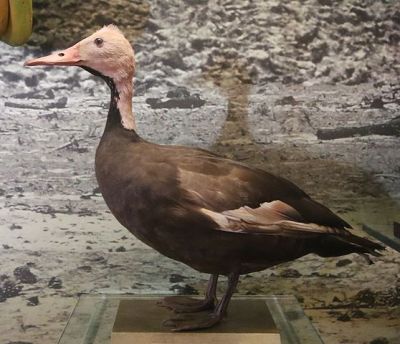 “The pink-headed duck (Rhodonessa caryophyllacea) was (or is) a large diving duck that was once found in parts of the Gangetic plains of India, Bangladesh and in the riverine swamps of Myanmar but feared extinct since the 1950s. Numerous searches have failed to provide any proof of continued existence. It has been suggested that it may exist in the inaccessible swamp regions of northern Myanmar and some sight reports from that region have led to its status being declared as “Critically Endangered” rather than extinct. The genus placement has been disputed and while some have suggested that it is close to the red-crested pochard (Netta rufina), others have placed it in a separate genus of its own. It is unique in the pink colouration of the head combined with a dark body. A prominent wing patch and the long slender neck are features shared with the common Indian spot-billed duck. The eggs have also been held as particularly peculiar in being nearly spherical.”

The next genus, Netta, and the Aythya genus, together make up the: “Subfamily: Aythyinae, diving ducks (Some 15 species of diving ducks, of worldwide distribution, in two to four genera; The 1986 morphological analysis suggested the probably extinct pink-headed duck of India, previously treated separately in Rhodonessa, should be placed in Netta, but this has been questioned. Furthermore, while morphologically close to dabbling ducks, the mtDNA data indicate a treatment as distinct subfamily is indeed correct, with the Tadorninae being actually closer to dabbling ducks than the diving ducks)”

“Netta is a genus of diving ducks. The name is derived from Greek Netta “duck”. Unlike other diving ducks, the Netta species are reluctant to dive, and feed more like dabbling ducks. These are gregarious ducks, mainly found on fresh water. They are strong fliers; their broad, blunt-tipped wings require faster wing-beats than those of many ducks and they take off with some difficulty.

They do not walk as well on land as the dabbling ducks because their legs tend to be placed further back on their bodies to help propel them when underwater.” 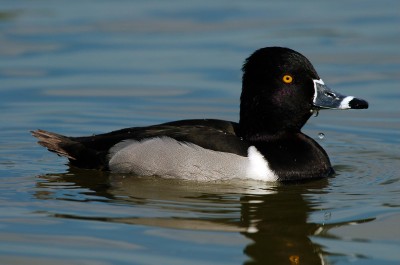 “Aythya is a genus of diving ducks. It has twelve described species. The name Aythya comes from the Ancient Greek word αυθυια, aithuia, which may have referred to a sea-dwelling duck or an auklet.” The Aythyas are the; Canvasback (A. valisineria), Common pochard (A. ferina), Redhead (A. americana), Ring-necked duck (A. collaris), Hardhead (A. australis), Baer’s pochard (A. baeri), Ferruginous duck (A. nyroca), Madagascar pochard (A. innotata), New Zealand scaup (A. novaeseelandiae), Tufted duck (A. fuligula), Greater scaup (A. marila), Lesser scaup (A. affinis)”

[all quoted material is from Wikipedia]

“And Noah went forth, and his sons, and his wife, and his sons’ wives with him: Every beast, every creeping thing, and every fowl, and whatsoever creepeth upon the earth, after their kinds, went forth out of the ark.” (Genesis 8:18-19 KJV)

“How Can I Keep Singing” ~ The 3+1 Trio (Pastor Jerry, Reagan Osborne, Caleb and Jessie Padgett)”.