“So God created great sea creatures and every living thing that moves, with which the waters abounded, according to their kind, and every winged bird according to its kind. And God saw that it was good.” (Genesis 1:21 NKJV)

The Procellariidae – Petrels, Shearwaters Family contains more than those two species of birds. You will be introduced to Giant Petrels, Diving Petrels, Petrels, Fulmars, Prions, and Shearwaters. The previous Petrels families shown were Storm Petrels (Oceanitidae and Hydrobatidae), and the Albatross (Diomedeidae) family also was presented. These four families make up the Procellariiformes Order. This Procellariidae group, being the largest, will take several weeks to be able to cover.

From Wikipedia – “The family Procellariidae is a group of seabirds that comprises the fulmarine petrels, the gadfly petrels, the prions, and the shearwaters. This family is part of the bird order Procellariiformes (or tubenoses), which also includes the albatrosses, the storm petrels, and the diving petrels.

The procellariids are the most numerous family of tubenoses, and the most diverse. They range in size from the giant petrels, which are almost as large as the albatrosses, to the prions, which are as small as the larger storm petrels. They feed on fish, squid and crustacea, with many also taking fisheries discards and carrion. All species are accomplished long-distance foragers, and many undertake long trans-equatorial migrations. They are colonial breeders, exhibiting long-term mate fidelity and site philopatry. In all species, each pair lays a single egg per breeding season. Their incubation times and chick-rearing periods are exceptionally long compared to other birds. 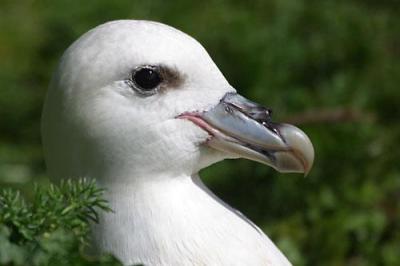 Many procellariids have breeding populations of over several million pairs; others number fewer than 200 birds. Humans have traditionally exploited several species of fulmar and shearwater (known as muttonbirds) for food, fuel, and bait, a practice that continues in a controlled fashion today. Several species are threatened by introduced species attacking adults and chicks in breeding colonies and by long-line fisheries.” (Wikipedia)

“Giant petrels form a genus, Macronectes, from the family Procellariidae, which consists of two species. They are the largest birds of this family. Both species are restricted to the Southern Hemisphere, and though their distributions overlap significantly, with both species breeding on the Prince Edward Islands, Crozet Islands, Kerguelen Islands, Macquarie Island and South Georgia, many southern giant petrels nest further south, with colonies as far south as Antarctica. Giant petrels are aggressive predators and scavengers, inspiring another common name, the stinker. South Sea whalers used to call them gluttons.”

“The Antarctic petrel (Thalassoica antarctica) is a boldly marked dark brown and white petrel, found in Antarctica, most commonly in the Ross and Weddell seas. They eat Antarctic krill, fish, and small squid. They feed while swimming but can dive from both the surface and the air.”

“The Cape petrel (Daption capense), also called the Cape pigeon, pintado petrel, or Cape fulmar is a common seabird of the Southern Ocean from the family Procellariidae. It is the only member of the genus Daption, and is allied to the fulmarine petrels, and the giant petrels. They are extremely common seabirds with an estimated population of around 2 million.” 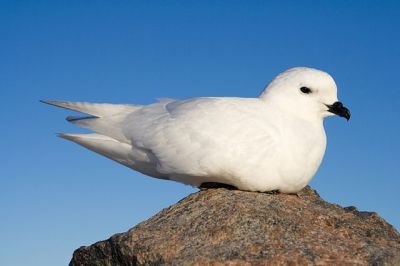 “The snow petrel (Pagodroma nivea) is the only member of the genus Pagodroma. It is one of only three birds that breed exclusively in Antarctica and has been seen at the geographic South Pole. It has the most southerly breeding distribution of any bird.

“The blue petrel (Halobaena caerulea) is a small seabird in the shearwater and petrel family Procellariidae. This small petrel is the only member of the genus Halobaena, but is closely allied to the prions.” 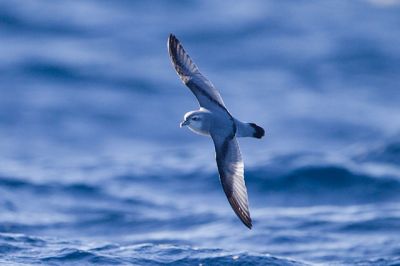 “Pachyptila is a genus of seabirds in the family Procellariidae and the order Procellariiformes. The members of this genus and the blue petrel form a sub-group called prions. They range throughout the southern hemisphere, often in the much cooler higher latitudes. Three species, the Broad-billed Prion (Pachyptila vittata), the Antarctic Prion (Pachyptila desolata) and the Fairy Prion (Pachyptila turtur), range into the subtropics.” 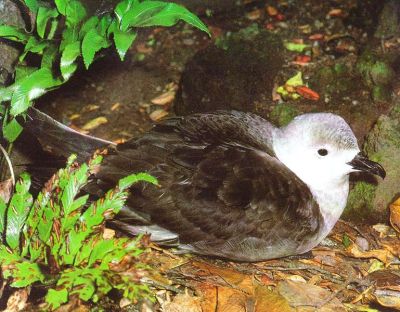 “The Kerguelen petrel (Aphrodroma brevirostris) is a small (36 cm long) slate-grey seabird. Kerguelen petrels breed colonially on remote islands; colonies are present on Gough Island in the Atlantic Ocean, and Marion Island, Prince Edward Island, Crozet Islands and Kerguelen Island in the Indian Ocean. The species attends its colonies nocturnally, breeding in burrows in wet soil. The burrows usually face away from the prevailing wind. A single egg is laid per breeding season; the egg is unusually round for the family. The egg is incubated by both parents for 49 days. After hatching the chick fledges after 60 days.”

[Quotes are from Wikipedia, with editing.]

“He alone spreads out the heavens, And treads on the waves of the sea;” (Job 9:8 NKJV)

Assurance: The Certainty of Salvation