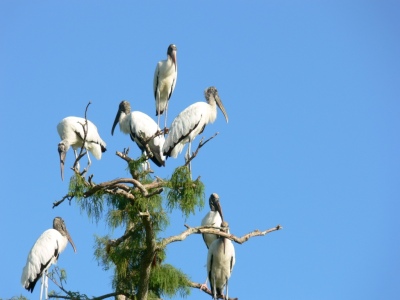 Wood Storks on top of tree at Circle B by Lee

“Where the birds make their nests; The stork has her home in the fir trees.” (Psalms 104:17 NKJV)

Wow! While searching through the index of this blog, I realized that the “Sunday Inspiration” was started in January of 2014. I had no idea it has been that long ago. Also, I realized that we are just about back to where it began.  Over the last three and a half years, you have been exposed to almost every family of birds in the world. They were randomly produced, then the Taxonomic order was begun with the Passerines, Singing and Perching Birds. It was finished up and then we started through taxonomically several months ago. Do you have any idea of the numbers of avian wonders that you have have been exposed to? Neither do I. :)

Currently, there are 10,681 species named with I.O.C., plus all the subspecies. I trust as you have seen their photos and listened to Christian music in the background, that it has been more pleasant than looking through guide books. :)

All of this has been said to let you know that if the “Sunday Inspiration” starts skipping over certain families, then it was already covered. The links to the skipped over ones will be listed. Most of you, like me, probably had no idea of what order the birds are listed in. We have all been learning as we have produced these Inspirations in order. 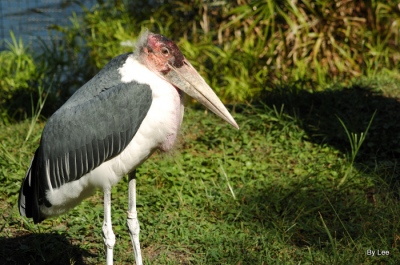 Storks are members of the Ciconiidae family and the only family in the Ciconiiformes Order. Storks are large to very large waterbirds. They range in size from the marabou, which stands 152 cm (60 in) tall and can weigh 8.9 kg (20 lb) the Abdim’s stork, which is only 75 cm (30 in) high and only weighs 1.3 kg (2.9 lb). Their shape is superficially similar to the herons, with long legs and necks, but they are heavier-set. There is some sexual dimorphism (differences between males and females) in size, with males being up to 15% bigger than females in some species (for example the saddle-billed stork), but almost no difference in appearance. The only difference is in the colour of the iris of the two species in the genus Ephippiorhynchus.

The bills of the storks are large to very large, and vary considerably between the genera. The shape of the bills is linked to the diet of the different species. The large bills of the Ciconia storks are the least specialised. Larger are the massive and slightly upturned bills of the Ephippiorhynchus and the jabiru. These have evolved to hunt for fish in shallow water. Larger still are the massive daggers of the two adjutants and marabou (Leptoptilos), which are used to feed on carrion and in defence against other scavengers, as well as for taking other prey. The long, ibis-like downcurved bills of the Mycteria storks have sensitive tips that allow them to detect prey by touch (tactilocation) where cloudy conditions would not allow them to see it. The most specialised bills of any storks are those of the two openbills (Anastomus.), which as their name suggested is open in the middle when their bill is closed. 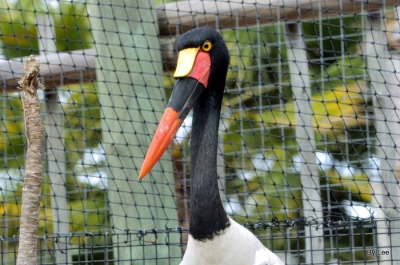 “Even the stork in the heavens Knows her appointed times; And the turtledove, the swift, and the swallow Observe the time of their coming. But My people do not know the judgment of the LORD.” (Jeremiah 8:7 NKJV)

The storks vary in their tendency towards migration. Temperate species like the white stork, black stork and Oriental stork undertake long annual migrations in the winter. The routes taken by these species have developed to avoid long distance travel across water, and from Europe, this usually means flying across the Straits of Gibraltar or east across the Bosphorus and through Israel and the Sinai. Studies of young birds denied the chance to travel with others of their species have shown that these routes are at least partially learnt, rather than being innate as they are in passerine migrants. Migrating black storks are split between those that make stopovers on the migration between Europe and their wintering grounds in Africa, and those that don’t.

The Abdim’s stork is another migrant, albeit one that migrates within the tropics. It breeds in northern Africa, from Senegal to the Red Sea, during the wet season, and then migrates to Southern Africa. Many species that aren’t regular migrants will still make smaller movements if circumstances require it; others may migrate over part of their range. This can also include regular commutes from nesting sites to feeding areas. Wood storks have been observed feeding 130 km (81 mi) from their colony. [Information from Wikipedia, with editing.]

*
“Nay, in all these things we are more than conquerors through him that loved us. For I am persuaded, that neither death, nor life, nor angels, nor principalities, nor powers, nor things present, nor things to come, Nor height, nor depth, nor any other creature, shall be able to separate us from the love of God, which is in Christ Jesus our Lord.” (Romans 8:37-39 KJV)


“Amazing Grace” and “I Love You” – Orchestra and Choir combined”.
*
More Sunday Inspirations
Birds of the Bible – Storks
Wordless Birds