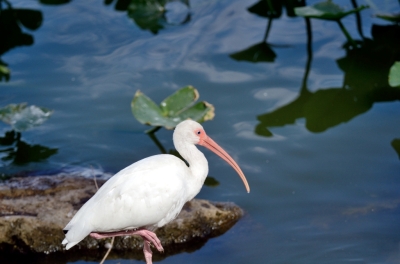 The family Threskiornithidae includes 34 species of large wading birds. The family has been traditionally classified into two subfamilies, the ibises and the spoonbills; however recent genetic studies are casting doubt on the arrangement and revealing the spoonbills to be nested within the ibises.

Members of the family have long, broad wings with 11 primary feathers and about 20 secondaries. They are strong fliers and, rather surprisingly, given their size and weight, very capable soarers. The body tends to be elongated, the neck more so, with rather long legs. The bill is also long, decurved in the case of the ibises, straight and distinctively flattened in the spoonbills. They are large birds, but mid-sized by the standards of their order, ranging from the dwarf olive ibis (Bostrychia bocagei), at 45 cm (18 in) and 450 g (0.99 lb), to the giant ibis (Thaumatibis gigantea), at 100 cm (39 in) and 4.2 kg (9.3 lb).

They are distributed almost worldwide, being found near almost any area of standing or slow-flowing fresh or brackish water. Ibises are also found in drier areas, including landfills.

All ibises are diurnal; spending the day feeding on a wide range of invertebrates and small vertebrates: ibises by probing in soft earth or mud, spoonbills by swinging the bill from side to side in shallow water. At night, they roost in trees near water. They are gregarious, feeding, roosting, and flying together, often in formation.

The small bird genus Geronticus belongs to the ibis subfamily (Threskiornithinae). Its name is derived from the Greek gérontos (γέρωντος, “old man”) in reference to the bald head of these dark-plumaged birds; in English, they are called bald ibises.

Geronticus contains two living species. The northern bald ibis (G. eremita) has a neck crest of elongated feathers. It is a Critically Endangered species found around the Mediterranean. Its range had expanded after the last glacial period to the Alps of Germany and even a bit further north, but it was rendered extinct there mainly due to habitat destruction and unsustainable hunting. The southern bald ibis (G. calvus) with a red crown patch but no crest is classified as Vulnerable and is found in subtropical southern Africa.

Nipponia – The crested ibis (Nipponia nippon), also known as the Japanese crested ibis or toki (トキ?), variously written in kanji as 朱鷺, 鴇, 鵇 or 鴾, and written in hanzi as 朱䴉 or 朱鷺, is a large (up to 78.5 cm (30.9 in) long), white-plumaged ibis of pine forests. Its head is partially bare, showing red skin, and it has a dense crest of white plumes on the nape. This species is the only member of the genus Nipponia.

Bostrychia is a genus of ibises in the family Threskiornithidae. Member species are found in many countries throughout Africa. 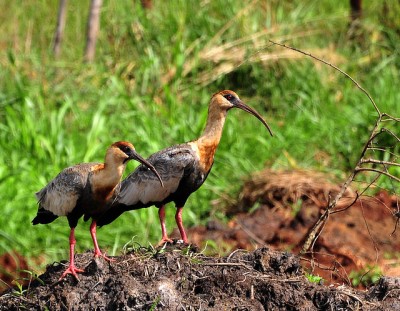 Cercibis – The sharp-tailed ibis (Cercibis oxycerca) is a species of ibis native to open wet savannas in parts of northern South America.

Mesembrinibis – The green ibis (Mesembrinibis cayennensis), also known as the Cayenne ibis, is a wading bird in the ibis family Threskiornithidae. It is the only member of the genus Mesembrinibis.

This is a resident breeder from Honduras through Nicaragua, Costa Rica and western Panama, and South America to northern Argentina. It undertakes some local seasonal movements in the dry season.

Phimosus –  The bare-faced ibis (Phimosus infuscatus), also known as the whispering ibis, is a species of bird in the family Threskiornithidae, in the monotypic genus Phimosus.

It is found in Argentina, Bolivia, Brazil, Colombia, Ecuador, Guyana, Paraguay, Suriname, Uruguay, and Venezuela. Its natural habitat is swamps. The Bare-faced Ibis is either dark brown or a blackish color. It is called the Bare-faced Ibis because it does not have any feathers on its face. It has a long Decurved bill that’s pinkish to reddish brown. The skin on its face is usually a reddish color and it also has long orangely colored beak with pink legs. The total length of the ibis ranges between 45 and 50 cm.

Eudocimus is a genus of ibises, wading birds of the family Threskiornithidae. They occur in the warmer parts of the New World with representatives from the southern United States south through Central America, the West Indies, and South America. 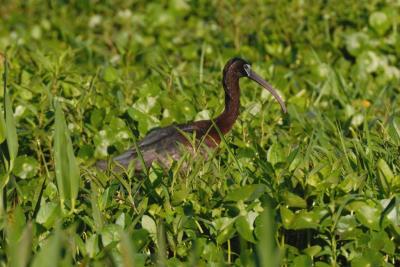 Plegadis is a bird genus in the family Threskiornithidae. The genus name derives from Ancient Greek plegados, “sickle”, referring to the distinctive shape of the bill. Member species are found on every continent except Antarctica as well as a number of islands. The glossy ibis is easily the most widespread of the three species. Plegadis contains the following three species: Glossy Ibis, Plegadis falcinellus, , White-faced Ibis, Plegadis chihi, Puna Ibis, Plegadis ridgwayi.

Lophotibis – The Madagascan ibis (Lophotibis cristata), also known as the Madagascar crested ibis, white-winged ibis or crested wood ibis, is a medium-sized (approximately 50 cm long), brown-plumaged ibis. It has bare red orbital skin, yellow bill, red legs, white wings and its head is partially bare with a dense crest of green or gloss blue and white plumes on the nape. The Madagascan Ibis is the only member of the genus Lophotibis.

All spoonbills have large, flat, spatulate bills and feed by wading through shallow water, sweeping the partly opened bill from side to side. The moment any small aquatic creature touches the inside of the bill—an insect, crustacean, or tiny fish—it is snapped shut. Spoonbills generally prefer fresh water to salt but are found in both environments. They need to feed many hours each day. 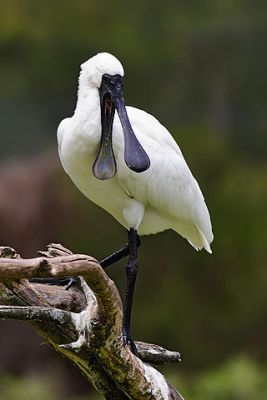 [Information from Wikipedia, with editing]

“And having an high priest over the house of God; Let us draw near with a true heart in full assurance of faith, having our hearts sprinkled from an evil conscience, and our bodies washed with pure water. Let us hold fast the profession of our faith without wavering; (for he is faithful that promised;)” (Hebrews 10:21-23 KJV)

“Stay Close To Me” ~ by the ©Hyssongs

Birds of the Bible – Ibises

3 thoughts on “Sunday Inspiration – Ibises and Spoonbills I”