G. Blue Heron on Gator’s back at Gatorland, by Lee

Denny the blue heron was the smallest out of all the blue herons that lived in the Florida reserve, but no one ever made fun of him for it because his best friend was the largest alligator in the reserve, Charles. Denny and Charles spent most of their time crossing the various swamps, with Charles slinking through the mud and weeds and Denny sitting on his back.

Usually, whenever Denny and Charles set out together, they would follow the trails marked in the reserve, so that they were always near the banks. The people who visited the reserve enjoyed seeing them wander down the swamp trails, especially since Denny sat on Charles’s back while Charles swam through the weeds.

One day, while Denny and Charles were traveling through the water, Denny spotted something unusual in the water. It was bright red, and it shone brightly when the sun reflected on it. Denny stuck his beak inside it to pick it up. He lifted the can and placed it onto Charles’s back. Denny wasn’t quite sure what it was, and Charles couldn’t see it because it was on his back. Denny decided to keep it.

Farther along down the reserve trail, Denny spotted another interesting object. He wasn’t sure what this was either, but it was bright yellow and small. Denny added it to his growing collection.

Eventually, Denny had several small objects piled on Charles’s back. He placed everything he had found on the bank so Charles could have a look at it. They both thought about what to do with what Denny found. After thinking for a long time, Denny proposed an idea. He thought it would be a great idea to set all of the objects they found in an area where all the other animals in the swamp could see them.

Denny promptly flew off to find a large open area for them to place their things. Charles slowly nudged the objects into his mouth and followed Denny to where he was calling. Charles dumped the objects onto the grass, glad to be of help.

Every day, Denny and Charles added more to their collection. They found two old water bottles, a small pipe, and several pieces of different materials that were several different colors like pink, red, blue, and yellow. Denny kept the can placed in a special spot for everyone to see, since he had found it first.

The birds, insects, and other animals enjoyed seeing all the things Denny and Charles had put out. Some of them thought it was odd that they collected that stuff, since it seemed to serve no purpose. 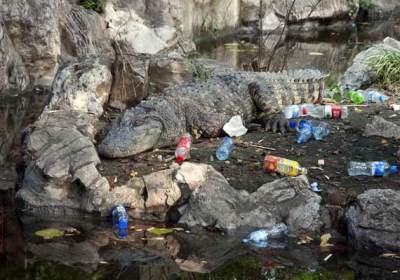 As summer drew near, it began raining more and more. Most of the animals had a comfortable place to spend every night. Charles was happy to sit in the swamp in the rain, and Denny sat in the trees, keeping a close eye on his collection. However, as he was watching it one evening he saw a little gray mouse pass him nearby. It was so small it could dodge the raindrops, but it still looked very wet and cold. It hid under the leaves in the bushes, but it couldn’t seem to find a warm, dry place for the night. Denny suddenly thought of the things he had found, but he couldn’t think of anything that would make a good house. Then he thought of the can.

Denny called Charles over. He told him about giving the can to the mouse, though he was reluctant to give it away. Charles thought it was a great idea, and he immediately crashed through the bushes to put the can in his mouth. Denny flew after the mouse, told her his name, and explained what they wanted to give her. At that moment, Charles waddled through the bushes and dropped the can beside the mouse. The mouse, Charlotte, was very grateful for what they had done. She rolled the can under the leaves, turned it to the side, and carefully squeezed through the opening to sit down inside. 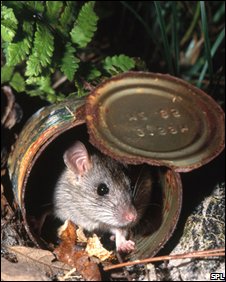 Mouse in Can (BBC)

Denny and Charles continued growing their collection. The other animals in the reserve enjoyed seeing what they added to the museum, and they sometimes even brought some of their own things that they had found. Charlotte the mouse stayed in her little can house, beside Denny and Charles’s museum, and told them every day how happy she was in her new home.

“A man that hath friends must shew himself friendly: and there is a friend that sticketh closer than a brother.” (Proverbs 18:24 KJV)

What an interesting story. Birds riding on gator’s backs isn’t as far-fetched as it might seem.

Thanks, Emma, for another delightful adventure. You continue to find heart-felt stories for us to enjoy. We will be looking forward your next one.

“Nevertheless, you have done well to share with me in my affliction.” (Philippians 4:14 NASB)

2 thoughts on “Denny and Charles’s Museum by Emma Foster”