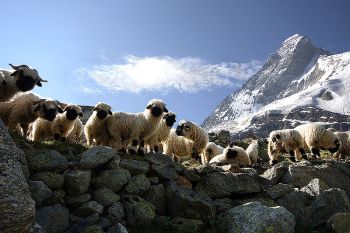 Scripture Alphabet of Animals: The Sheep

I suppose you think you already know as much about sheep and lambs as I can tell you, and perhaps you do. Yet I dare say you never took up your Bible to see how many times they are mentioned there, or how many beautiful things are said about them. Abel, who, as you know, was the third man that lived on the earth, was a

and there have always been a great many shepherds in the world from that time to this. Some of the men who lived in old times had a great many sheep. Job had seven thousand, which God allowed to be taken from him; but afterwards gave him twice as many-fourteen thousand. At the time when Solomon’s beautiful temple was dedicated to God, he offered a sacrifice of a hundred and twenty thousand sheep. If you want to know how many that is, try to think of a pasture with a hundred sheep in it-then think of a hundred pastures, just like it, with just as many sheep in each-then think of those hundred pastures taken twelve times over, and you will begin to understand how many there were. It is not common with us to have persons whose whole business it is to take care of sheep, but that was always the way in Bible countries. This was not done by servants, at least not always; for a great many rich men employed their children as shepherds. Rachel, who was afterwards the wife of Jacob,

-so did Jacob’s twelve sons-so did Moses for his father-in-law.

When God was about to make David king, he sent Samuel the prophet to do it by anointing him, or putting oil upon his head. David had six brothers, and Samuel did not know which of all the sons was to be king; but both he and their father Jesse supposed it would be one of the older ones, and nobody remembered even to call little David, who had been left with the sheep, until they found that he was the one whom God had chosen. David often spoke of his shepherd-life after he became a king, and even when he was an old man. You remember that most beautiful psalm of his, the twenty-third,

The Lord is my shepherd, I shall not want: he maketh me to lie down in green pastures; he leadeth me beside the still waters.

That is the way they are accustomed to do in those countries: the shepherd walks on, and the sheep follow where he wishes them to go. So Christ says,

And when he (the shepherd) putteth forth his own sheep, he goeth before them, and the sheep follow him, for they know his voice.

The sheep in many countries are in danger from wolves, which prowl about and try to carry them off; so it is necessary to watch them by night as well as by day. You remember the shepherds were watching their flocks by night when the bright angels appeared to tell the glad tidings that A SAVIOR had come; and they were the first to hear that sweet song in the stillness of the night, when all around were hushed in sleep.

The sheep is so timid and gentle that it needs the protection of man, and without the care of the shepherd would often stray away and be lost, or devoured by other animals. David says,

and in Isaiah we read,

Is not this true of us-that we have gone away, far away, from Jesus our good shepherd? Perhaps, dear child, you are wandering still; but why should you thus go on, alone, and every hour in danger? Why should you, when he calls you back with his voice of kindness, and is ready to

gather you with his arms, and carry you in his bosom.

as the shepherd does his tender lambs?