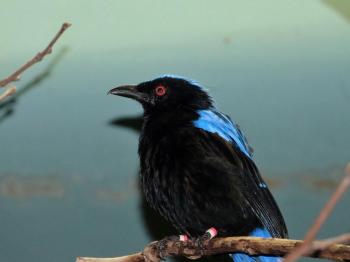 Declare His glory among the nations, His wonders among all peoples. (Psalms 96:3 NKJV)

In Birdwatching at the Cincinnati Zoo I, you were introduced to the outside of the Wings of the World exhibit where the different birds are presented according to their habitats. Birds of the Bible – The Bat Revisited was about the two species of Bats at the Zoo. Today, I like to introduce two more species that the Lord created. The Asian Fairy-bluebird and the Blue-crowned Laughingthrush which were sharing the same aviary and the same tree.

The Asian Fairy-bluebird (Irena puella) is a medium-sized, arboreal passerine bird. They are members of the Irenidae – Fairy-bluebirds Family.

This fairy-bluebird is found in forests across tropical southern Asia from the Himalayan foothills, India and Sri Lanka east through Indochina, the Greater Sundas and Palawan (Philippines). Two or three eggs are laid in a small cup nest in a tree. The only other member of the genus and family is the Philippine Fairy-bluebird, I. cyanogastra, which replaces the Asian Fairy-bluebird in most of the Philippines. 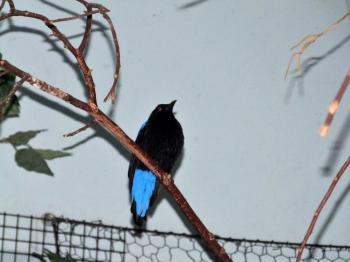 The male has glossy, iridescent blue upperparts, and black underparts and flight feathers. The female and first year male are entirely dull blue-green.

The Asian Fairy Bluebird eats fruit, nectar and some insects. Its call is a liquid two note glue-it.

The name of this bird commemorates the French missionary Frédéric Courtois. 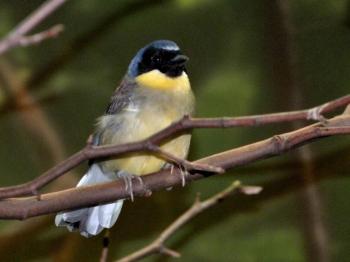 He will yet fill your mouth with laughter And your lips with shouting. (Job 8:21 NASB)

It feeds principally on fruit and is generally found on the larger forest-trees. 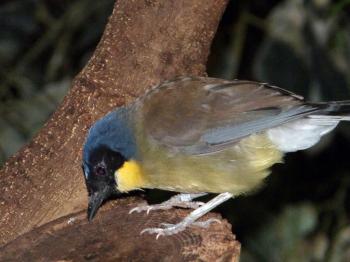 It breeds from February to April, constructing a shallow cup-shaped nest, sometimes of moss and sometimes of small twigs, in a sapling or small tree. The eggs, which are generally two in number, are greenish white marked with brown.

Here are three short videos of them that I took. Sorry for the shakiness.

(Information from Wikipedia and other internet resources)