I’ve chosen an owl this time because I want to talk about a beautiful book called The Enigma of the Owl. A complimentary copy of it arrived recently by air from the UK, because I supplied a photo of a Rufous Owl. I’ll come back to the book and the Rufous Owl in a moment, but first, here is the Brown Wood Owl, which, unlike the Rufous Owl, hasn’t ever featured as bird of the week.

In 2007 I spent several days at an unashamedly spartan wildlife outfit called Uncle Tan’s Wildlife Adventures in near the Kinatabangan River in Sabah, Malaysian Borneo. One doesn’t go there for the facilities – the best shower we had was during a monsoonal downpour when everyone repaired outside with soap and shampoo – but for the wonderful wildlife. There were regular wildlife-spotting boat trips by day and by night on the river and lots of interesting animals, including Orang Utans in the jungle near the camp. My main target was, successfully, the Buffy Fish Owl but we also came across the Brown Wood Owl in the forest between the camp and the river. 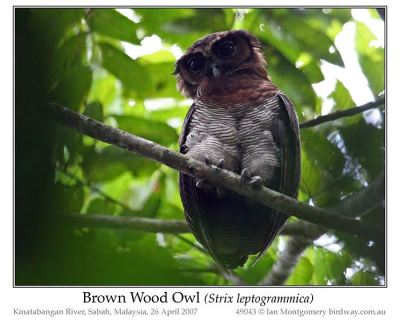 This is a medium to large owl, 40-55cm/16-22in in length, a member of the globally widespread genus Strix which includes the well-known Tawny Owl of Europe, the Barred and Spotted Owls of North America and other representatives in Africa and South America but not Australia. The specific name leptogrammica means fine-lined and refers to the elegant barred underparts. 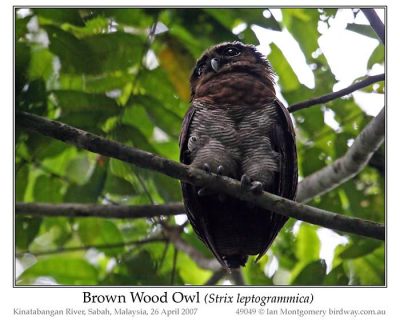 We came across the Brown Wood Owl twice. The first two photos are of the same individual, but the second one is of another bird three days later. 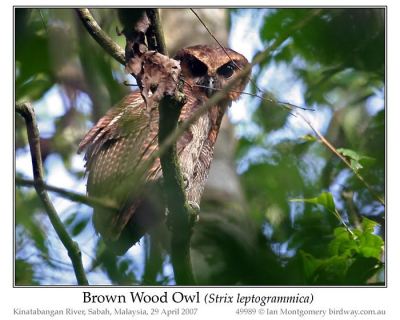 These three photos illustrate some of the difficulties of photographing owls. Most are nocturnal, many are shy (the Brown Wood Owl in particular prefers undisturbed forest and avoids areas of human habitation), so you need to be lucky to find them at their roosting sites. Roosting owls are prime targets for mobbing by other birds, so they often roost in hollows or in dense vegetation. In woodland, a bird in an unusually clear visible position like the first one here is often back-lit, while the second bird is well-lit but partially obscured by branches and leaves. I say this not just to make excuses but to express my admiration for many of the wonderful photos in The Enigma of the Owl.

So I’m happy to have had this photo of a Rufous Owl selected for inclusion in the book. The bird in the photo was the immature member of a family of three that roosted regularly for a while in 2008 in an easily accessible spot behind the Black Hawk Memorial in the Palmetum, one of the three botanic gardens in Townsville. The Memorial honours 18 Australian servicemen killed when two Black Hawk helicopters collided in Townsville in 1996. 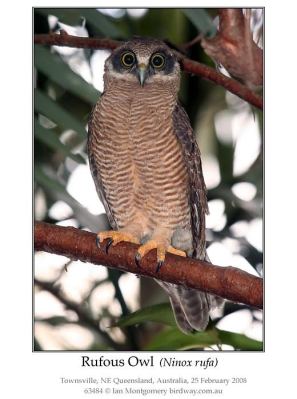 The general introduction to the book covers the taxonomy, physiology (visual and auditory), life-style and significance to humans of owls. The remainder of the book consists of detailed treatment of 80 of the approximately global 250 species of owls, with thorough natural histories of each species and about 200 spectacular photos, mostly covering a whole page and sometimes two pages. The 80 species are organised into chapters by region: North America; Central & South America; Eurasia; Africa; Southern Asia and Australasia; and Oceanic Islands. Each regional chapter has its own introduction.

This is a terrific book and I highly recommend it. The UK edition is ₤32 and the US edition is $40 fantastic value for a large hard cover book of this quality. There isn’t an Australian edition but Italian, Japanese, French and German editions will be published later this year. My only quibble is that I think it would be better organised taxonomically rather than geographically, but that reflects my taxonomic and evolutionary tastes. That said, the taxonomic cover is very broad: there are representatives of all the important genera (about 22 out of about 27) and the missing ones are either obscure or fairly closely related to other ones already in the book.

Lee’s Addition:
Another neat looking Owl and what an adventure just to get their photos. I am glad that Ian shares his many birds that he works so hard to photograph. We sit back in our easy chairs and sometimes forget what it takes to come up with these photographs from our photographers. Thanks again, Ian, for sharing with us.