We have written several articles about the Bee-eaters, but they are so pretty and colorful, that they are being presented again. When the Lord created them, He did not spare on the “color pallet.” Nor did He fail to provide them with the ability to know how to remove the stinger and poison of the bees and other insects before eating them.

For by him were all things created, that are in heaven, and that are in earth, visible and invisible, whether they be thrones, or dominions, or principalities, or powers: all things were created by him, and for him: And he is before all things, and by him all things consist. (Colossians 1:16-17 KJV)

This video tells about how the Bee-eater cooperate together in communities. Trust you will enjoy watching it.

“The bee-eaters are a group of near-passerine birds in the family Meropidae. Most species are found in Africa and Asia but others occur in southern Europe, Australia, and New Guinea. They are characterised by richly coloured plumage, slender bodies, and usually elongated central tail feathers. All have long downturned bills and pointed wings, which give them a swallow-like appearance when seen from afar. There are 26 different species of bee-eaters.

As the name suggests, bee-eaters predominantly eat flying insects, especially bees and wasps, which are caught in the air by sallies from an open perch.[1] While they pursue any type of flying insect, honey bees predominate in their diet. Hymenoptera (ants, bees and wasps) comprise from 20% to 96% of all insects eaten, with honey bees comprising approximately one-third of the Hymenoptera. 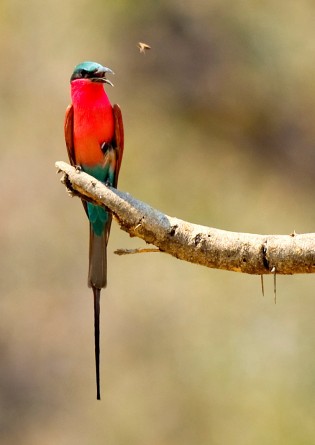 Before eating its meal, a bee-eater removes the sting by repeatedly hitting and rubbing the insect on a hard surface. During this process, pressure is applied to the insect thereby extracting most of the venom.[1] Notably, the birds only catch prey that are on the wing and ignore flying insects once they land.

Bee-eaters are gregarious. They form colonies by nesting in burrows tunnelled into the side of sandy banks, such as those that have collapsed on the edges of rivers. Their eggs are white and they generally produce 2-9 eggs per clutch (depending on species). As they live in colonies, large numbers of these holes are often seen together, white streaks from their accumulated droppings accentuating the entrances to the nests. Most of the species in the family are monogamous, and both parents care for the young, sometimes with the assistance of other birds in the colony.” (From Wikipedia)

Some of the articles we have done that mention the Bee-eaters are:

White-fronted Bee-eater – The Life Guards ~ by a j mithra

Ian added the Rainbow Bee-eater to his album in his Spotted Harrier newsletter.

European Bee-eaters are in Birds of the Bible – Johannesburg, South Africa

Mentioned in Birds of the Bible – Names of Birds

The Bee-eaters are in the Coraciiformes Order which included the Roller, Kingfisher, Todie, Motmot Families. The Meropidae Family is the one that contains the 26 Bee-eater species.

Ian’s Bird of the Week – Laughing Kookaburra ~ by Ian Montgomery

The Blue-winged Kookaburra has featured as bird of the week (twice) but, as far as I can detect, the iconic Laughing Kookaburra hasn’t, so let’s correct that using library photos. Bird photo opportunities were time-constrained during the wonderful recorder course in Armidale, NSW, though a family of roosting Southern Boobooks (which featured as bird of the week last year) gave the participants much pleasure and I’ll let you know when I’ve put the photos on the website.

Its loud cackling call is a characteristic sound of the Australian landscape (and of the sound tracks of B-grade jungle movies not set in Australia) and it’s a familiar bird in southern and eastern Australia, first photo.

Up to 47cm/18.5in in length, it’s larger than its blue-winged cousin (length to 40cm) and by far the largest Australian Kingfisher. Unlike male blue-winged, birds of both sexes have brown tails and are not easily told apart. The third photo shows a breeding pair of Laughing Kookaburras, photographed near their nest site in a tree hollow in the botanic gardens (the Palmetum) in Townsville.

Older males can, however, be distinguished by having bluish rumps,  like one making his presence very audible in the third photo. Kookaburras are very territorial and defend their territories by having calling matches and by performing circular display flights as far as the boundary of the territory. A territorial group consists of either just a breeding pair or a dominant breeding pair and several ‘helper’ birds so the calling matches can be very noisy indeed when everyone takes part. 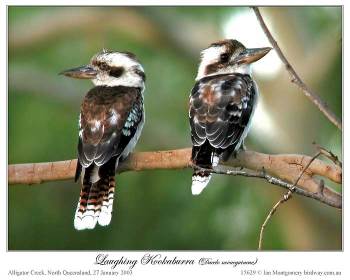 Juvenile birds are recognisable by the pale brownish scalloped edges to the plumage, most noticeable on the back like the right hand bird in the fourth photo. This bird is barely fledged and has a very short tail.

Kookaburras are carnivorous and they hunt from perches, doing long glides down to catch terrestrial prey, typically large insects and small mammals and reptiles. The bird in the fifth photo has just caught a mouse. They will immobilise their prey by beating it on the perch, and will automatically do this even when fed dead food such as strips of meat. 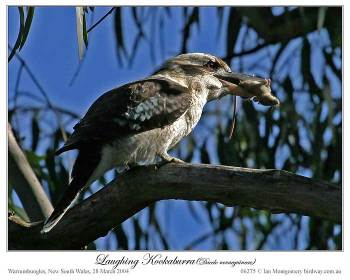 The original range of the Laughing Kookaburra comprised only mainland eastern Australia from the tip of Cape York in the north south to Victoria and as far west as eastern South Australia. Since european settlement it has been successfully introduced to southwestern Western Australia, Tasmania, the islands in Bass Strait and Kangaroo Island in South Australia. Unfortunately, in these areas it competes with the native wildlife for food and with species that nest in tree hollows such as Southern Boobooks.

While we were at the National Aviary last summer, we had the privilege of seeing and hearing the Kookaburra in action. Below is the video I took up there. The Kookaburras are in the Alcedinidae – Kingfisher Family of the Coraciiformes Order.

The 5 Kookaburras are the Shovel-billed, Laughing, Blue-winged, Spangled and Rufous-bellied Kookaburra.

While having the privilege of obtaining some photos for future blogs from Peter Ericsson’s Galleries, I obtained a few photos of the Pied Kingfisher. I thought this Kingfisher was very pretty. Then I found this amazing video from BBC Worldwide and decided to share these. Another reason, my attempts to photograph our Belted Kingfishers is never very successful. Thankfully Peter and the videographers had better success.

When the Lord created the birds, He gave them so many amazing abilities. The way the Kingfisher keeps his head so steady is absolutely fantastic.

O the depth of the riches both of the wisdom and knowledge of God! how unsearchable are his judgments, and his ways past finding out! For who hath known the mind of the Lord? or who hath been his counsellor? (Romans 11:33-34 KJV)

The Pied Kingfisher is about 7 – 10 in or 17-25 cm long with a white with a black mask, a white supercilium and black breast bands. The female has only one breast band. The crest is neat and the upperparts are barred in black. There are several subspecies. It is common throughout sub-Saharan Africa and southern Asia from Turkey to India to China. It is resident, and most birds do not migrate, other than short-distance seasonal movements. In India it is distributed mainly on the plains. It is thought to be the world’s 3rd most common kingfisher and a noisy bird.

Fish is its main diet, though it will eat other aquatic invertebrates. It usually hunts by hovering over the water to detect prey and diving vertically down bill-first to capture fish. When not foraging, they have a straight rapid flight and have been observed flying at nearly 32 mph.

In the beginning God created the heavens and the earth. The earth was without form, and void; and darkness was on the face of the deep. And the Spirit of God was hovering over the face of the waters. (Genesis 1:1-2 NKJV)

During breeding season (February to April), they make its nest in a hole excavated in a vertical mud bank about five feet above water. The nest tunnel is 4 to 5 feet long and ends in a chamber. Several birds may nest in the same vicinity. The usual clutch is 3-6 white eggs. The pied kingfisher sometimes reproduces co-operatively, with young non-breeding birds from an earlier brood assisting parents (helpers) or even unrelated older birds.

And Jesus said to him, “Foxes have holes and birds of the air have nests, but the Son of Man has nowhere to lay His head. (Matthew 8:20 NKJV)

Kingfishers “are monogamous, teritorial, and sometimes colonial.”  Courtship displays are noisy and the displays are in duet as they raise their wings or spiral in flight. Recent suggestion is that the Pied Kingfisher and the American green kingfishers are derived from an Old World species (kind), with the Pied Kingfisher or its ancestor losing the metallic colouration afterwards. The Alcedinidae Family is where the Kingfishers and Kookaburras are found. At present there are 95 of them. They belong to the Coraciiformes Order. The Order includes Rollers, Ground Rollers, Kingfishers, Todies, Motmots, and Bee-eaters.

Pied Piper up close by IndiaVideo.org

Peter Ericsson is in Thailand and is a Christian photographer. His two sites are Peter Ericsson’s Photo Galleries and his blog Thaibirder . Please visit his sites for some fantastic photagraphy.

Information taken from Wikipedia,  Complete Birds of the World, and Bird