THE MOTTLED OR “SCREECH” OWL.

IGHT WANDERER,” as this species of Owl has been appropriately called, appears to be peculiar to America. They are quite scarce in the south, but above the Falls of the Ohio they increase in number, and are numerous in Virginia, Maryland, and all the eastern districts. Its flight, like that of all the owl family, is smooth and noiseless. He may be sometimes seen above the topmost branches of the highest trees in pursuit of large beetles, and at other times he sails low and swiftly over the fields or through the woods, in search of small birds, field mice, moles, or wood rats, on which he chiefly subsists.

The Screech Owl’s nest is built in the bottom of a hollow trunk of a tree, from six to forty feet from the ground. A few grasses and feathers are put together and four or five eggs are laid, of nearly globular form and pure white color. This species is a native of the northern regions, arriving here about the beginning of cold weather and frequenting the uplands and mountain districts in preference to the lower parts of the country.

In the daytime the Screech Owl sits with his eyelids half closed, or slowly and alternately opening and shutting, as if suffering from the glare of day; but no sooner is the sun set than his whole appearance changes; he becomes lively and animated, his full and globular eyes shine like those of a cat, and he often lowers his head like a cock when preparing to fight, moving it from side to side, and also vertically, as if watching you sharply. In flying, it shifts from place to place “with the silence of a spirit,” the plumage of its wings being so extremely fine and soft as to occasion little or no vibration of the air.

The Owl swallows its food hastily, in large mouthfuls. When the retreat of a Screech Owl, generally a hollow tree or an evergreen in a retired situation, is discovered by the Blue Jay and some other birds, an alarm is instantly raised, and the feathered neighbors soon collect and by insults and noisy demonstration compel his owlship to seek a lodging elsewhere. It is surmised that this may account for the circumstance of sometimes finding them abroad during the day on fences and other exposed places.

Both red and gray young are often found in the same nest, while the parents may be both red or both gray, the male red and the female gray, or vice versa.

The vast numbers of mice, beetles, and vermin which they destroy render the owl a public benefactor, much as he has been spoken against for gratifying his appetite for small birds. It would be as reasonable to criticise men for indulging in the finer foods provided for us by the Creator. They have been everywhere hunted down without mercy or justice.

During the night the Screech Owl utters a very peculiar wailing cry, not unlike the whining of a puppy, intermingled with gutteral notes. The doleful sounds are in great contrast with the lively and excited air of the bird as he utters them. The hooting sound, so fruitful of “shudders” in childhood, haunts the memory of many an adult whose earlier years, like those of the writer, were passed amidst rural scenery. 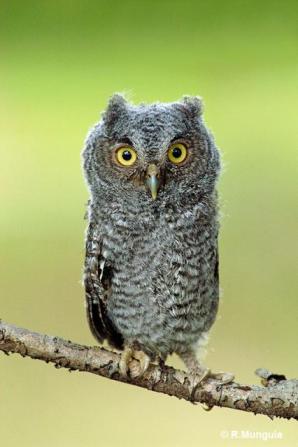 I wouldn’t let them put my picture last in the book as they did my cousin’s picture in March “Birds.” I told them I would screech if they did.

You don’t see me as often as you do the Blue-bird, Robin, Thrush and most other birds, but it is because you don’t look for me. Like all other owls I keep quiet during the day, but when night comes on, then my day begins. I would just as soon do as the other birds—be busy during the day and sleep during the night—but really I can’t. The sun is too bright for my eyes and at night I can see very well. You must have your folks tell you why this is.

I like to make my nest in a hollow orchard tree, or in a thick evergreen. Sometimes I make it in a hay loft. Boys and girls who live in the country know what a hay loft is.

People who know me like to have me around, for I catch a good many mice, and rats that kill small chickens. All night long I fly about so quietly that you could not hear me. I search woods, fields, meadows, orchards, and even around houses and barns to get food for my baby owls and their mamma. Baby owls are queer children. They never get enough to eat, it seems. They are quiet all day, but just as soon as the sun sets and twilight gathers, you should see what a wide awake family a nest full of hungry little screech owls can be.

Did you ever hear your mamma say when she couldn’t get baby to sleep at night, that he is like a little owl? You know now what she means. I think I hear my little folks calling for me so I’ll be off. Good night to you, and good morning for me.

Owls belong to the Strigidae – Owls Family which has 207 members. Like most Owls, the females are larger than the males and both are small and agile. They stand about 7-10 in. tall and wings are 18-24 inches across. “They have prominent, wide-set feather tufts with bright yellow eyes. They have different brownish hues with whitish, patterned underside. This coloration helps them get camouflage against the tree bark. They have well-developed raptorial claws and curved bill. They use them as a tool to tear their prey into pieces that are small enough for them to swallow. They tend to carry their prey to the nest and then eat it.”

The Lord has wonderfully created them for just the roll they play, as mentioned above. He has given them special feathers on the fronts of their wings, like most owls, that give them their stealthy quite approach. They are a Bible Bird, as Scripture says, have helped teach man. Our Stealth bombers, I understand, used some of these ideas to help keep the planes “stealthy.”

Thought you might enjoy hearing the sound of a Screech Owl

Next Article – The Orchard Oriole

Eastern Screech Owl – All About Birds

Western Screech Owl – All About Birds