The Orchard Oriole is here.
Why has he come? To cheer, to cheer—C. C. M.

HE Orchard Oriole has a general range throughout the United States, spending the winter in Central America. It breeds only in the eastern and central parts of the United States. In Florida it is a summer resident, and is found in greatest abundance in the states bordering the Mississippi Valley. This Oriole appears on our southern border about the first of April, moving leisurely northward to its breeding grounds for a month or six weeks, according to the season, the males preceding the females several days.

Though a fine bird, and attractive in his manners and attire, he is not so interesting or brilliant as his cousin, the Baltimore Oriole. He is restless and impulsive, but of a pleasant disposition, on good terms with his neighbors, and somewhat shy and difficult to observe closely, as he conceals himself in the densest foliage while at rest, or flies quickly about from twig to twig in search of insects, which, during the summer months, are his exclusive diet.

The favorite haunts of this very agreeable songster, as his name implies, are orchards, and when the apple and pear trees are in bloom, and the trees begin to put out their leaves, his notes have an ecstatic character quite the reverse of the mournful lament of the Baltimore species. Some writers speak of his song as confused, but others say this attribute does not apply to his tones, the musician detecting anything but confusion in the rapidity and distinctness of his gushing notes. These may be too quick for the listener to follow, but there is harmony in them.

In the Central States hardly an orchard or a garden of any size can be found without these birds. They prefer to build their nests in apple trees. The nest is different, but quite as curiously made as that of the Baltimore. It is suspended from a small twig, often at the very extremity of the branches. The outer part of the nest is usually formed of long, tough grass, woven through with as much neatness and in as intricate a manner as if sewed with a needle. The nests are round, open at the top, about four inches broad and three deep.

It is admitted that few birds do more good and less harm than our Orchard Oriole, especially to the fruit grower. Most of his food consists of small beetles, plant lice, flies, hairless caterpillars, cabbage worms, grasshoppers, rose bugs, and larvæ of all kinds, while the few berries it may help itself to during the short time they last are many times paid for by the great number of insect pests destroyed, making it worthy the fullest protection.

The Orchard Oriole is very social, especially with the king bird. Most of his time is spent in trees. His flight is easy, swift, and graceful. The female lays from four to six eggs, one each day. She alone sits on the eggs, the male feeding her at intervals. Both parents are devoted to their young.

The fall migration begins in the latter part of July or the beginning of August, comparatively few remaining till September.

Its leaves were fair and its fruit abundant, and in it was food for all. The living creatures of the field found shade under it, and the birds of the sky dwelt in its branches; and all flesh was fed from it. (Daniel 4:12 AMP)

The Orchard Oriole is in the Icteridae – Oropendolas, Orioles & Blackbirds Family. It  is the smallest North American species of icterid blackbird. The subspecies of the Caribbean coast of Mexico, I. s. fuertesi, is sometimes considered a separate species, the Ochre Oriole.

This species is 6.3 inches (16 cm) long and weighs 20 g. The bill is pointed and black with some blue-gray at the base of the lower mandible (Howell and Webb 1995). The adult male of the nominate subspecies has chestnut on the underparts, shoulder, and rump, with the rest of the plumage black. In the subspecies I. s. fuertesi, the chestnut is replaced with ochre (Howell and Webb 1995). The adult female and the juvenile of both subspecies have olive-green on the upper parts and yellowish on the breast and belly. All adults have pointed bills and white wing bars. (Orchard Orioles are considered to be adults after their second year.) One-year-old males are yellow-greenish with a black bib. 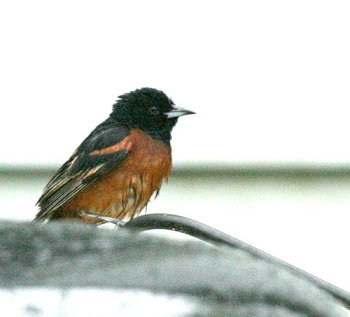 Next Article – The Marsh Hawk

Orchard Oriole – All About Birds