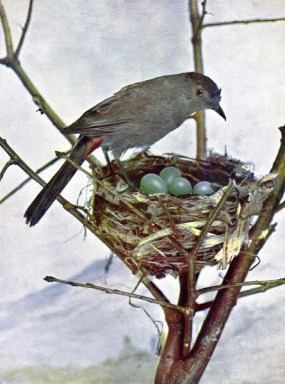 “In passing through the woods in summer I have sometimes amused myself with imitating the violent chirping or clucking of young birds, in order to observe what different species were round me; for such sounds at such a season in the woods are no less alarming to the feathered tenants of the bushes than the cry of fire or murder in the street is to the inhabitants of a large city. On such occasion of alarm and consternation, the Catbird is first to make his appearance, not single but sometimes half a dozen at a time, flying from different quarters to the spot. At this time those who are disposed to play on his feelings may almost throw him into a fit, his emotion and agitation are so great at what he supposes to be the distressful cries of his young. He hurries backward and forward, with hanging wings, open mouth, calling out louder and faster, and actually screaming with distress, until he appears hoarse with his exertions. He attempts no offensive means, but he wails, he implores, in the most pathetic terms with which nature has supplied him, and with an agony of feeling which is truly affecting. At any other season the most perfect imitations have no effect whatever on him.”

The Catbird is a courageous little creature, and in defense of its young it is so bold that it will contrive to drive away any snake that may approach its nest, snakes being its special aversion. His voice is mellow and rich, and is a compound of many of the gentle trills and sweet undulations of our various woodland choristers, delivered with apparent caution, and with all the attention and softness necessary to enable the performer to please the ear of his mate. Each cadence passes on without faltering and you are sure to recognize the song he so sweetly imitates. While they are are all good singers, occasionally there is one which excels all his neighbors, as is frequently the case among canaries.

The Catbird builds in syringa bushes, and other shrubs. In New England he is best known as a garden bird. Mabel Osgood Wright, in “Birdcraft,” says: “I have found it nesting in all sorts of places, from an alder bush, overhanging a lonely brook, to a scrub apple in an open field, never in deep woods, and it is only in its garden home, and in the hedging bushes of an adjoining field, that it develops its best qualities—‘lets itself out,’ so to speak. The Catbirds in the garden are so tame that they will frequently perch on the edge of the hammock in which I am sitting, and when I move they only hop away a few feet with a little flutter. The male is undoubtedly a mocker, when he so desires, but he has an individual and most delightful song, filled with unexpected turns and buoyant melody.”

What do you think of this nest of eggs? What do you suppose Mrs. Catbird’s thoughts are as she looks at them so tenderly? Don’t you think she was very kind to let me take the nest out of the hedge where I found it, so you could see the pretty greenish blue eggs? I shall place it back where I got it. Catbirds usually build their nests in hedges, briars, or bushes, so they are never very high from the ground.

Did you ever hear the Catbird sing? He is one of the sweetest singers and his song is something like his cousin’s, the Brown Thrush, only not so loud.

He can imitate the songs of other birds and the sounds of many animals. He can mew like a cat, and it is for this reason that he is called “Catbird.” His sweetest song, though, is soft and mellow and is sung at just such times as this—when thinking of the nest, the eggs, or the young.

The Catbird is a good neighbor among birds. If any other bird is in trouble of any sort, he will do all he can to relieve it. He will even feed and care for little birds whose parents have left them. Don’t you think he ought to have a prettier name? Now remember, the Catbird is a Thrush. I want you to keep track of all the Thrushes as they appear in “Birds.” I shall try to show you a Thrush each month.

Next month you shall see the sweetest singer of American birds. He, too, is a Thrush. I wonder if you know what bird I mean. Ask your mamma to buy you a book called “Bird Ways.” It was written by a lady who spent years watching and studying birds. She tells so many cute things about the Catbird.

He sends the springs into the valleys; They flow among the hills. They give drink to every beast of the field; The wild donkeys quench their thirst. By them the birds of the heavens have their home; They sing among the branches. (Psalms 104:10-12 NKJV)

The Grey Catbird (Dumetella carolinensis) is in the Mockingbirds, Thrashers – Mimidae Family. We have managed to see them occasionally, but most times you are more apt to hear them than to see them.

Scolding call and a song of a Catbird, both from xeno-canto.org

Sound of its song.

The Gray Catbird (Dumetella carolinensis), also spelled Grey Catbird, is a medium-sized northern American perching bird of the mimid family. It is the only member of the “catbird” genus Dumetella. Like the Black Catbird (Melanoptila glabrirostris), it is among the basal lineages of the Mimidae, probably a closer relative of the Caribbean thrasher and trembler assemblage than of the mockingbirds and Toxostoma thrashers. In some areas it is known as the Slate-colored Mockingbird.

Adults weigh around 35–40 g (1.2–1.4 oz) and are plain lead gray almost all over. The top of the head is darker. The undertail coverts are rust-colored and the remiges and rectrices are black, some with white borders. The slim bill, the eyes, and the legs and feet are also blackish. Males and females cannot be distinguished by their looks; different behaviours in the breeding season is usually the only clue to the observer. Juveniles are even plainer in coloration, with buffy undertail coverts.

Gray Catbird – All About Birds – Cornell Lab of Ornithology