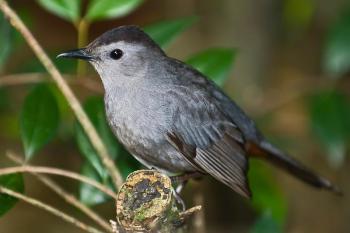 I came across a very interesting YouTube from the LabofOrnithology. It tells about how the Grey (Gray) Catbird mimics so many bird species (and a frog also). Listen as Greg Budney, audio curator at the Macaulay Library, dissects the recording and notes each snippet of mimicked song. (IOC uses the name Grey Catbird and some others still use the Gray spelling.)

Isn’t that amazing? He produced it very well by showing the bird and then the Catbird mimicking it. I have always enjoyed finding our Grey Catbirds in this area. (When you can find them!)

Catbirds get their name because they belong to several unrelated groups of songbirds because their wailing calls, which resemble a cat’s meowing. The genus name Ailuroedus likewise is from the Greek for “cat-singer” or “cat-voiced”.

Australasian catbirds are the genera Ailuroedus and the monotypic Scenopooetes. They belong to the bowerbird family (Ptilonorhynchidae) of the basal songbirds:

New World catbirds are two monotypic genera from the mimid family (Mimidae) of the passeridan superfamily Muscicapoidea. Among the Mimidae, they represent independent basal lineages probably closer to the Caribbean thrasher and trembler assemblage than to the mockingbirds and Toxostoma thrashers:

A monotypic genus from Africa. It is tentatively placed in the Sylviidae – Sylviid Babblers of the passeridan superfamily Sylvioidea, but possibly closer to the typical warblers of the Sylviidae.

Woe to the world for such temptations to sin and influences to do wrong!… (Matthew 18:7 AMP)

And Samuel heard all the words of the people, and he repeated them in the hearing of the LORD. (1 Samuel 8:21 NKJV)

He who covers and forgives an offense seeks love, but he who repeats or harps on a matter separates even close friends. (Proverbs 17:9 AMP)

By the blessing of the influence of the upright and God’s favor [because of them] the city is exalted, but it is overthrown by the mouth of the wicked. He who belittles and despises his neighbor lacks sense, but a man of understanding keeps silent. He who goes about as a talebearer reveals secrets, but he who is trustworthy and faithful in spirit keeps the matter hidden. (Proverbs 11:11-13 AMP)

As I was watching the video some verses came to mind. What are we mimicking? I’ve written about the birds that repeat what we say in, Birds of the Bible – Repeating Birds. When we watch TV, listen to music, listen to speeches, read the newspaper, etc. We are being influenced. There are times when we “mimic” what we have seen or heard. It can go either way.

If we mimic, let us mimic the Lord.

Ian’s Bird of the Week – Green Catbird ~ by Ian Montgomery

My trip to Sydney produced another bird on my wanted list that I had taken only poor photos of before, the Green Catbird. It’s not rare or, given its calls, hard to find in its favourite habitat of temperate and sub-tropical rainforest, but most birds apart from things like Brush-Turkeys are hard to photograph in rainforest. It’s call is not as one might expect a gentle miaowing but more like a cat being given an injection at the vets or those rude sounds make with balloons and as such, is one of the delights of east coast rainforest.

Australian Catbirds, unrelated to American Catbirds, are members of the Bowerbird family. Unlike their flamboyant cousins, they form pair-bonds and the males help in domestic chores like nest-building. So, eschewing wild mating behaviour, they don’t build wonderful bowers or collect flashy toys. Everything has its price, one supposes, but the call is some compensation. At 24-32cm/10-13in in length, they’re comparable in size to Satin Bowerbirds and, if silent in foliage, can be confused with female or immature members of that species.

The generic name Ailuroedus comes from the Greek ailouros for cat and odos for a singer, which is stretching the definition of singer slightly, but maybe singing embraces yodelling. The range of the Green Catbird extends from the south coast of New South Wales (Narooma) to near Gladstone on the central coast of Queensland. In tropical Queensland it is replaced by the very similar-looking and similar-sounding Spotted Catbird which featured as Bird of the Week in 2006 (below). 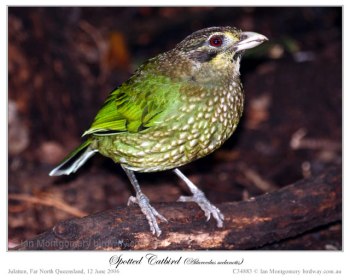 The ‘Spotted’ presumably refers to the stronger markings on the breast as the Green Catbird has more obvious white spots on the back (second photo) but the main difference is the darker markings on the face of the Spotted Catbird. As their ranges don’t overlap, distinguishing between them isn’t an issue. The Spotted Catbird extends from Paluma Range National Park, near Bluewater where I live to Cooktown and there is a separate population, recognised as a different race with darker face markings, on Cape York (e.g. Iron Range). In the past, both Green and Spotted were treated as a single species and some of the splitters would like to make the Cape York race a full species, another tick I suppose. There are other races of the Spotted in New Guinea and another species, the White-eared Catbird, A. buccoides.

Dan and I were able to see a White-eared Catbird (Ailuroedus buccoides) this year at the Zoo Miami. Most of the time when I think of a Grey Catbird (Dumetella carolinensis), it is ours  which is in a completely different family. (Mimidae – Mockingbirds, Thrashers) The Black Catbird (Melanoptila glabrirostris) is also part of that family. The 6th Catbird, Abyssinian Catbird (Parophasma galinieri) is in yet another family (Sylviidae – Sylviid Babblers).

See more of Ian’s Bird of the Week adventures.