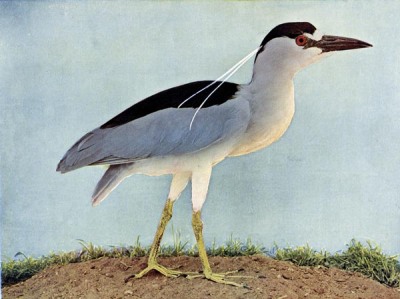 HAT a beautiful creature this is! A mounted specimen requires, like the Snowy Owl, the greatest care and a dust tight glass case to preserve its beauty. Dr. Coues’ account of it should be read by those who are interested in the science of ornithology. It is a common bird in the United States and British Provinces, being migratory and resident in the south. Heronries, sometimes of vast extent, to which they return year after year, are their breeding places. Each nest contains three or four eggs of a pale, sea-green color. Observe the peculiar plumes, sometimes two, in this case three, which spring from the back of the head. These usually lie close together in one bundle, but are often blown apart by the wind in the form of streamers. This Heron derives its name from its habits, as it is usually seen flying at night, or in the early evening, when it utters a sonorous cry of quaw or quawk. It is often called Quawk or Qua-Bird.

On the return of the Black-Crowned Night Heron in April, he promptly takes possession of his former home, which is likely to be the most solitary and deeply shaded part of a cedar swamp. Groves of swamp oak in retired and water covered places, are also sometimes chosen, and the males often select tall trees on the bank of the river to roost upon during the day. About the beginning of twilight they direct their flight toward the marshes, uttering in a hoarse and hollow tone, the sound qua. At this hour all the nurseries in the swamps are emptied of their occupants, who disperse about the marshes along the ditches and river shore in search of food. Some of these nesting places have been occupied every spring and summer for many years by nearly a hundred pair of Herons. In places where the cedars have been cut down and removed the Herons merely move to another part of the swamp, not seeming greatly disturbed thereby; but when attacked and plundered they have been known to remove from an ancient home in a body to some unknown place.

The Heron’s nest is plain enough, being built of sticks. On entering the swamp in the neighborhood of one of the heronries the noise of the old and young birds equals that made by a band of Indians in conflict. The instant an intruder is discovered, the entire flock silently rises in the air and removes to the tops of the trees in another part of the woods, while sentries of eight or ten birds make occasional circuits of inspection.

The young Herons climb to the tops of the highest trees, but do not attempt to fly. While it is probable these birds do not see well by day, they possess an exquisite facility of hearing, which renders it almost impossible to approach their nesting places without discovery. Hawks hover over the nests, making an occasional sweep among the young, and the Bald Eagle has been seen to cast a hungry eye upon them.

The male and female can hardly be distinguished. Both have the plumes, but there is a slight difference in size.

The food of the Night Heron, or Qua-Bird, is chiefly fish, and his two interesting traits are tireless watchfulness and great appetite. He digests his food with such rapidity that however much he may eat, he is always ready to eat again; hence he is little benefited by what he does eat, and is ever in appearance in the same half-starved state, whether food is abundant or scarce. 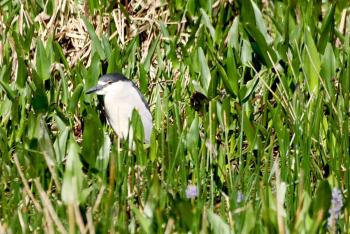 Frequently several nests will be found in the same tree, and I have counted as many as fifty nests in view at the same time. In large swamps in the south they generally nest at a low elevation, while in the marshes of Wisconsin and Minnesota, large colonies of them nest on the ground, making their nest of rushes. Like all Heronries, those of this species have a nauseating odor, from the remains of decayed fish, etc., which are strewn around the bases of the trees. Their eggs number from three to five and are of a pale bluish green color. Size 2.00 × 1.40. 4 eggs. Nest of sticks, about thirty feet up in a pine tree. Many other nests (From the Bird Book)

Adults are approximately 64 cm (25 in) long and weigh 800 g (28 oz). They have a black crown and back with the remainder of the body white or grey, red eyes, and short yellow legs. They have pale grey wings and white under parts. Two or three long white plumes, erected in greeting and courtship displays, extend from the back of the head. The sexes are similar in appearance although the males are slightly larger. Black-crowned Night Herons do not fit the typical body form of the heron family. They are relatively stocky and about 25 in tall (63 cm) with shorter bills, legs, and necks than their more familiar cousins the egrets and “day” herons. Their resting posture is normally somewhat hunched but when hunting they extend their necks and look more like other wading birds. 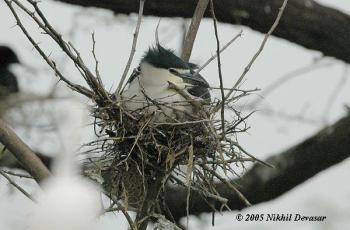 These birds stand still at the water’s edge and wait to ambush prey, mainly at night or early morning. They primarily eat small fish, crustaceans, frogs, aquatic insects, small mammals and small birds. During the day they rest in trees or bushes. N. n. hoactli is more gregarious outside the breeding season than the nominate race. (Wikipedia) 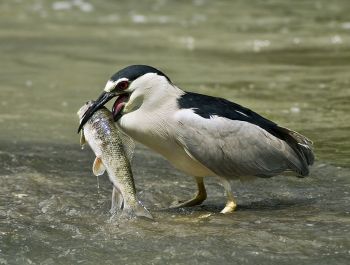 Now there is a case of almost biting off more than you can chew.

The Night Herons are in the Ardeidae – Herons, Bitterns Family of the Pelicaniformes Order. There are 72 species in the family. 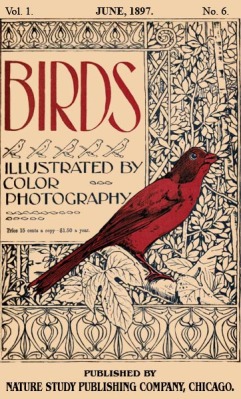 Next Article – The Ring-Billed Gull

Black-crowned Night Heron – All About Birds

Birds of the Bible – Herons

Herons and Egrets  – by Dan