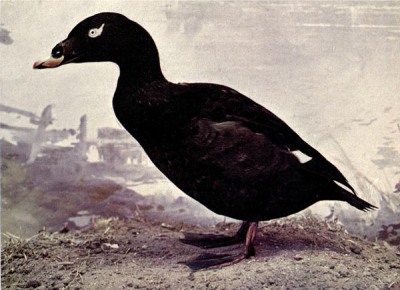 HE specimen we give of the American Scoter is one of unusual rarity and beauty of plumage. It was seen off the government pier, in Chicago, in November, 1895, and has been much admired.

The Scoter has as many names as characteristics, being called the Sea Coot, the Butter-billed, and the Hollow-billed Coot. The plumage of the full grown male is entirely black, while the female is a sooty brown, becoming paler below. She is also somewhat smaller.

This Duck is sometimes found in great numbers along the entire Atlantic coast where it feeds on small shell fish which it secures by diving. A few nest in Labrador, and in winter it is found in New Jersey, on the Great Lakes, and in California. The neighborhoods of marshes and ponds are its haunts, and in the Hudson Bay region the Scoter nests in June and July.

The nest is built on the ground near water. Coarse grass, feathers, and down are commonly used to make it comfortable, while it is well secreted in hollows in steep banks and cliffs. The eggs are from six to ten, of a dull buff color.

Prof. Cooke states that on May 2, 1883, fifty of these ducks were seen at Anna, Union county, Illinois, all busily engaged in picking up millet seed that had just been sown. If no mistake of identification was made in this case, the observation apparently reveals a new fact in the habits of the species, which has been supposed to feed exclusively in the water, and to subsist generally on fishes and other aquatic animal food.

Range—Northern North America; breeding in Labrador and the fur countries; south in winter.

Nest—On the ground, beneath bushes.

I have been hunted like a bird by those who were my enemies without cause; (Lamentations 3:52 ESV)

Look at the birds of the air: they neither sow nor reap nor gather into barns, and yet your heavenly Father feeds them. Are you not of more value than they? (Matthew 6:26 ESV)

The article is titled “American Scoter” but the photos and information is mostly about the “White-winged Scoter”. I have provided information on both of those Scoters. I have never seen any of the Scoters that I remember. They are in the Anatidae – Ducks, Geese & Swans family. I love those eyes of the White-winged Scoter.

The scoters are stocky seaducks in the genus Melanitta. The drakes are mostly black and have swollen bills. Females are brown.

They breed in the far north of Europe, Asia and North America, and winter further south in temperate zones of those continents. They form large flocks on suitable coastal waters. These are tightly packed, and the birds tend to take off together.

Their lined nests are built on the ground close to the sea, lakes or rivers, in woodland or tundra. These species dive for crustaceans and molluscs.

There are five species, grouped into two subgenera:

The presumed fossil “scoter” Melanitta ceruttii which lived in California is now placed in the genus Histrionicus.

The adult female Black or American Scoter averages about 2.1 lbs.(980 grams ) and 18 inches (45 cm) in length, while the adult male is on average 2.4 lbs. (1100 grams) and 19 inches (49 cm) in length. It is characterized by its bulky shape and large bill. The male is all black with a very bulbous bill which is mostly yellow,a good relation with the common scoter. The female is a brown bird with pale cheeks, very similar to female Common Scoter. This is America’s only black duck, although the female may have some yellow around the nostrils.

This species can be distinguished from other scoters, apart from Common, by the lack of white anywhere on the drake, and the more extensive pale areas on the female.

The lined nest is built on the ground close to the sea, lakes or rivers, in woodland or tundra. 5-7 eggs are laid. Each eggs weighs from 2-2.6 oz (60-74 grams), or 8% of the females body weight. The incubation period may range from 27 to 31 days. Females brood their young extensively for about 3 weeks, after which the still flightless young must fend for themselves.

The white patches are visible but not conspicuous when the wings are folded.

There are a number of differing characteristic of the Eastern Siberian race and the American race from Alaska and Canada to west of the Hudson Bay. Males of the American subspecies have browner flanks, dark yellow coloration of most of the bill and a less tall bill knob, approaching the Velvet Scoter. The Asian form has a very tall knob at the base of its mostly orange-yellow bill. Females are identical in the field.

It was formerly considered to be conspecific with the Velvet Scoter, and some taxonomists still regard it as so. These two species, and the Surf Scoter, are placed in the subgenus Melanitta, distinct from the subgenus Oidemia, Black and Common Scoters.

The White-winged Scoter breeds over the far north of Asia east of the Yenisey Basin, and North America. It winters further south in temperate zones, on the Great Lakes, the coasts of the northern USA and the southern coasts of Canada, and Asia as far south as China. It forms large flocks on suitable coastal waters. These are tightly packed, and the birds tend to take off together. 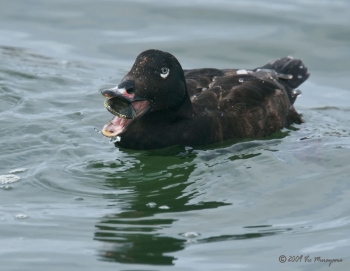 Next Article – The Snowy Heron