The Crested Pigeon was another interesting bird that we were able to watch at the Zoo Miami, Birds of Asia Aviary. I like their Crest. It adds some “class” to this creation from the Lord. They are colorful, but notice in the photos below how they blend in with their surrounding. The Creator has provided them with a nice camouflage design.

The Crested Pigeon (Ocyphaps lophotes, also commonly known as the Top Notch Pigeon) is a bird found widely throughout mainland Australia except for the far northern tropical areas. They belong to the Columbidae Family and is the only member of the genus Ocyphaps. There are only two Australian pigeon species that possess an erect crest, being the Crested Pigeon and the Spinifex Pigeon. The Crested Pigeon is the larger of the two species.

Habitat is grasslands, brush and wooded areas but they can also be seen at watercourses, homestead gardens, pastoral areas, sports grounds, and golf courses. Their habitat has expanded since settlement has produced pastoral lands (previously they were only found in inland and Western Australia). Foraging for grain, has adapted to grain farming areas, often feeding on the noxious weed of Salvation Jane. They are commonly misidentified as the Topknot Pigeon.

Their most distinctive behaviour is the beating and whistling sound their wings make when they take off. This is most likely to draw the attention of predators to birds on the wing, and away from any birds remaining on the ground and as an alarm call to other pigeons. When the birds land, the tail tilts upwards and the flight patterns are similar to the those of the Spotted Turtle-Dove. They are generally solitory. Although they can be seen in pairs, they can be highly social and tend to be seen in packs. They are highly gregarious birds when in contact with humans. (Wikipedia) 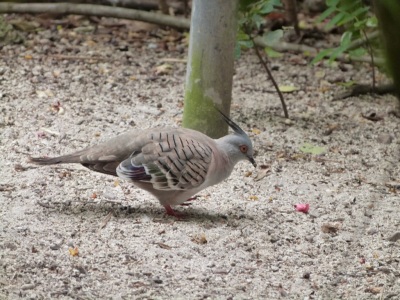 I trust you enjoy the Crested Pigeon (Ocyphaps lophotes). My computer is off line, in fact, not even set up. A new flooring is being installed in that room and it is getting a new coat of paint. So it will be down for several days. This is being scheduled ahead of time.

One thought on “Crested Pigeon at Zoo Miami”