The Crow and the Blue Jay.

By the sounds of rejoicing among the feathered folks of the Old Orchard Johnny Chuck knew that it was quite safe for him to come out. He was eager to tell Skimmer the Tree Swallow how glad he was that Mr. Blacksnake had been driven away before he could get Skimmer’s eggs. As he poked his head out of his doorway he became aware that something was still wrong in the Old Orchard. Into the glad chorus there broke a note of distress and sorrow. Johnny instantly recognized the voices of Welcome Robin and Mrs. Robin. There is not one among his feathered neighbors who can so express worry and sorrow as can the Robins.

Johnny was just in time to see all the birds hurrying over to that part of the Old Orchard where the Robins had built their home. The rejoicing suddenly gave way to cries of indignation and anger, and Johnny caught the words, “Robber! Thief! Wretch!” It appeared that there was just as much excitement over there as there had been when Mr. Blacksnake had been discovered trying to rob Skimmer and Mrs. Skimmer. It couldn’t be Mr. Blacksnake again, because Farmer Brown’s boy had chased him in quite another direction.

“What is it now?” asked Johnny of Skimmer, who was still excitedly discussing with Mrs. Skimmer their recent fright.

“I don’t know, but I’m going to find out,” replied Skimmer and darted away.

“The Robins have lost their eggs!” he cried excitedly. “All four have been broken and eaten. Mrs. Robin left them to come over here to help drive away Mr. Blacksnake, and while she was here some one ate those eggs. Nobody knows who it could have been, because all the birds of the Old Orchard were over here at that time. It might leave been Chatterer the Red Squirrel, or it might have been Sammy Jay, or it might have been Creaker the Grackle, or it might have been Blacky the Crow. Whoever it was just took that chance to sneak over there and rob that nest when there was no one to see him.”

Crow at Flamingo Gardens by Lee

Just then from over towards the Green Forest sounded a mocking “Caw, caw, caw!” Instantly the noise in the Old Orchard ceased for a moment. Then it broke out afresh. There wasn’t a doubt now in any one’s mind. Blacky the Crow was the robber. How those tongues did go! There was nothing too bad to say about Blacky. And such dreadful things as those birds promised to do to Blacky the Crow if ever they should catch him in the Old Orchard.

“Caw, caw, caw!” shouted Blacky from the distance, and his voice sounded very much as if he thought he had done something very smart. It was quite clear that at least he was not sorry for what he had done.

All the birds were so excited and so angry, as they gathered around Welcome and Mrs. Robin trying to comfort them, that it was some time before their indignation meeting broke up and they returned to their own homes and duties. Almost at once there was another cry of distress. Mr. and Mrs. Chebec had been robbed of their eggs! While they had been attending the indignation meeting at the home of the Robins, a thief had taken the chance to steal their eggs and get away.

Of course right away all the birds hurried over to sympathize with the Chebecs and to repeat against the unknown thief all the threats they had made against Blacky the Crow. They knew it couldn’t have been Blacky this time because they had heard Blacky cawing over on the edge of the Green Forest. In the midst of the excited discussion as to who the thief was, Weaver the Orchard Oriole spied a blue and white feather on the ground just below Chebec’s nest.

At the sight of that telltale feather all the birds knew that Weaver was right, and led by Scrapper the Kingbird they began a noisy search of the Old Orchard for the sly robber. But Sammy wasn’t to be found, and they soon gave up the search, none daring to stay longer away from his own home lest something should happen there. Welcome and Mrs. Robin continued to cry mournfully, but little Mr. and Mrs. Chebec bore their trouble almost silently.

“There is one thing about it,” said Mr. Chebec to his sorrowful little wife, “that egg of Sally Sly’s went with the rest, and we won’t have to raise that bothersome orphan.”

“That’s true,” said she. “There is no use crying over what can’t be helped. It is a waste of time to sit around crying. Come on, Chebec, let’s look for a place to build another nest. Next time I won’t leave the eggs unwatched for a minute.”

Meanwhile Jenny Wren’s tongue was fairly flying as she chattered to Peter Rabbit, who had come up in the midst of the excitement and of course had to know all about it.

“Blacky the Crow has a heart as black as his coat, and his cousin Sammy Jay isn’t much better,” declared Jenny. “They belong to a family of robbers.”

“Wait a minute,” cried Peter. “Do you mean to say that Blacky the Crow and Sammy Jay are cousins?”

“For goodness’ sake, Peter!” exclaimed Jenny, “do you mean to say that you don’t know that? Of course they’re cousins. They don’t look much alike, but they belong to the same family. I would expect almost anything bad of any one as black as Blacky the Crow. But how such a handsome fellow as Sammy Jay can do such dreadful things I don’t understand. He isn’t as bad as Blacky, because he does do a lot of good. He destroys a lot of caterpillars and other pests.

“There are no sharper eyes anywhere than those of Sammy Jay, and I’ll have to say this for him, that whenever he discovers any danger he always gives us warning. He has saved the lives of a good many of us feathered folks in this way. If it wasn’t for this habit of stealing our eggs I wouldn’t have a word to say against him, but at that, he isn’t as bad as Blacky the Crow. They say Blacky does some good by destroying white grubs and some other harmful pests, but he’s a regular cannibal, for he is just as fond of young birds as he is of eggs, and the harm he does in this way is more than the good he does in other ways. He’s bold, black, and bad, if you ask me.”

Remembering her household duties, Jenny Wren disappeared inside her house in her usual abrupt fashion. Peter hung around for a while but finding no one who would take the time to talk to him he suddenly decided to go over to the Green Forest to look for some of his friends there. He had gone but a little way in the Green Forest when he caught a glimpse of a blue form stealing away through the trees. He knew it in an instant, for there is no one with such a coat but Sammy Jay. Peter glanced up in the tree from which Sammy had flown and there he saw a nest in a crotch halfway up. “I wonder,” thought Peter, “if Sammy was stealing eggs there, or if that is his own nest.” Then he started after Sammy as fast as he could go, lipperty-lipperty-lip. As he ran he happened to look back and was just in time to see Mrs. Jay slip on to the nest. Then Peter knew that he had discovered Sammy’s home. He chuckled as he ran. 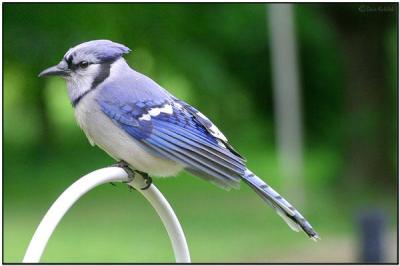 “I’ve found out your secret, Sammy Jay!” cried Peter when at last he caught up with Sammy.

“Then I hope you’ll be gentleman enough to keep it,” grumbled Sammy, looking not at all pleased.

“Certainly,” replied Peter with dignity. “I wouldn’t think of telling any one. My, what a handsome fellow you are, Sammy.”

Sammy looked pleased. He is a little bit vain, is Sammy Jay. There is no denying that he is handsome. He is just a bit bigger than Welcome Robin. His back is grayish-blue. His tail is a bright blue crossed with little black bars and edged with white. His wings are blue with white and black bars. His throat and breast are a soft grayish-white, and he wears a collar of black. On his head he wears a pointed cap, a very convenient cap, for at times he draws it down so that it is not pointed at all.

“Why did you steal Mrs. Chebec’s eggs?” demanded Peter abruptly.

Sammy didn’t look the least bit put out. “Because I like eggs,” he replied promptly. “If people will leave their eggs unguarded they must expect to lose them. How did you know I took those eggs?”

Sammy opened his mouth for a sharp reply, but instead he uttered a cry of warning. “Run, Peter! Run! Here comes Reddy Fox!” he cried.

Peter dived headlong under a great pile of brush. There he was quite safe. While he waited for Reddy Fox to go away he thought about Sammy Jay. “It’s funny,” he mused, “how so much good and so much bad can be mixed together. Sammy Jay stole Chebec’s eggs, and then he saved my life. I just know he would have done as much for Mr. and Mrs. Chebec, or for any other feathered neighbor. He can only steal eggs for a little while in the spring. I guess on the whole he does more good than harm. I’m going to think so anyway.”

Peter was quite right. Sammy Jay does do more good than harm.

When they found the feather, a verse comes to mind:

Therefore comfort each other and edify one another, just as you also are doing. (1 Thessalonians 5:11 NKJV)

Next Chapter (Some Homes in the Green Forest.)